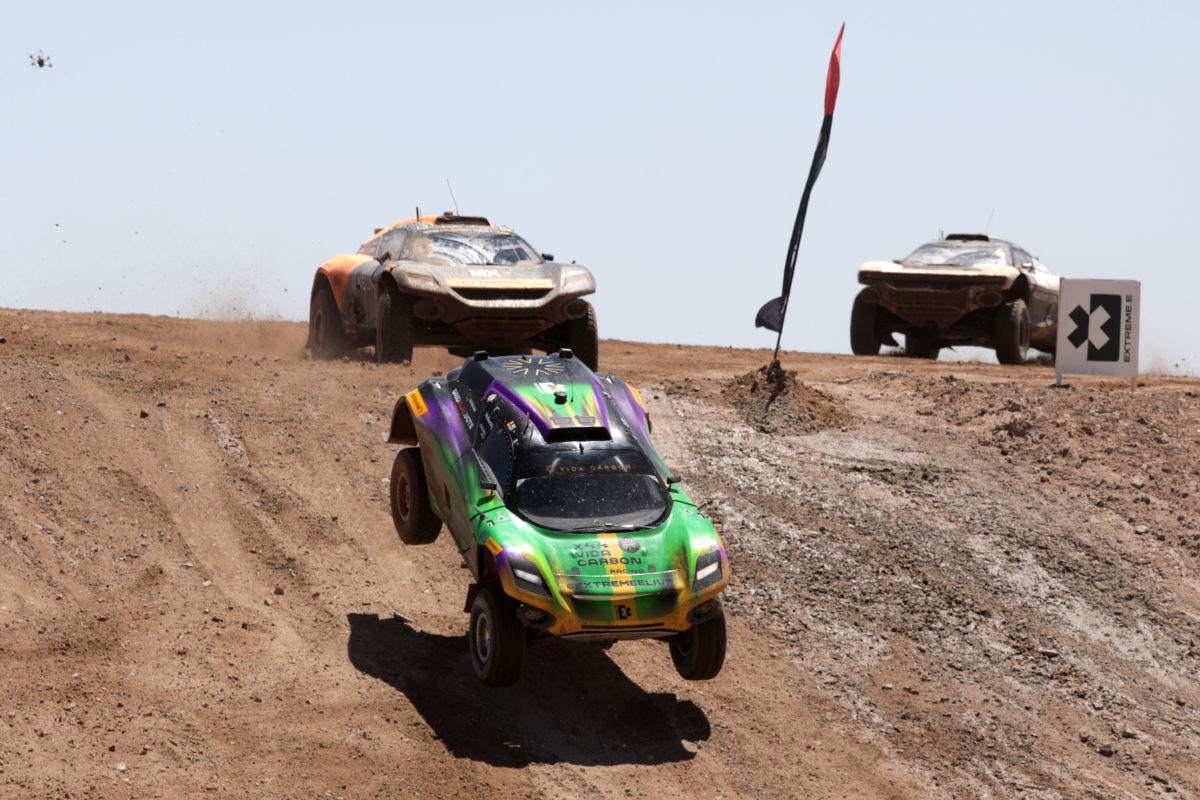 Sebastien Loeb and Cristina Gutierrez have claimed their first victory of the season in Round 4 of the 2022 Extreme E Championship in Chile.

Despite setting the fastest lap in the Final, the X44 Racing drivers finished second on track to McLaren Extreme E.

The Sainz Xe Team Entry of Carlos Sainz Snr/Laia Sanz and the ABT Cupra Xe entry of Nasser Al-Attiyah/Klara Andersson benefitted from the penalty to finish on the podium.

Andersson’s podium came on debut after she stepped in for the injured Jutta Kleinschmidt, who was involved in a massive crash in Free Practice 2.

The German was attended to on scene and was able to get herself out of the car.

She was taken to hospital as a precaution and for further checks.

Rosberg X Racing’s Johan Kristoffersson and Mikaela Ahlin-Kottulinsky set the pace in Qualifying 1, topping the timesheets with a time of 8:49.216s around the three-kilometre course.

After finishing first in Qualifying 1 and second in Qualifying 2, the Nico Rosberg-owned outfit did enough to top the timesheets in Qualifying, with X44 Vida Carbon Racing in second while the Chip Ganassi Racing entry finished third in the overall Qualifying standings.

Rosberg X Racing went onto win Semi-Final 1 from Sainz Xe Team, while X44 claimed victory in Semi-Final 2 from ABT Cupra Xe, with McLaren Extreme E winning the Crazy Race to seal the last spot on the grid for the Final.

Prior to the Final, technical issues for the Rosberg X Racing entry resulted in the Ganassi entry of Kyle LeDuc and Sara Price taking part in the race.

Loeb claimed an early lead in the Final, as Foust made his way through the field into second, with LeDuc third from Sainz Snr.

Ahead of the driver change, the American found his way around the nine-time world rally champion to take the lead, leaving Gilmour and Gutierrez to fight it out at the front of the pack.

McLaren’s advantage was short-lived with Gutierrez taking the lead back from Gilmour on the first lap after the driver change, with Price third from ABT Cupra Xe’s Andersson.

After racing side-by-side, Gilmour dived down the inside of Gutierrez to take the chequered flag first, however the 20-second penalty would eventually see herself and Foust classified fifth.

Ganassi’s Price crossed the line third, but a five-second penalty for missing a marker saw the entry classified fourth.

The final round of the season will take place in Punta del Este, Uruguay on November 26-27.