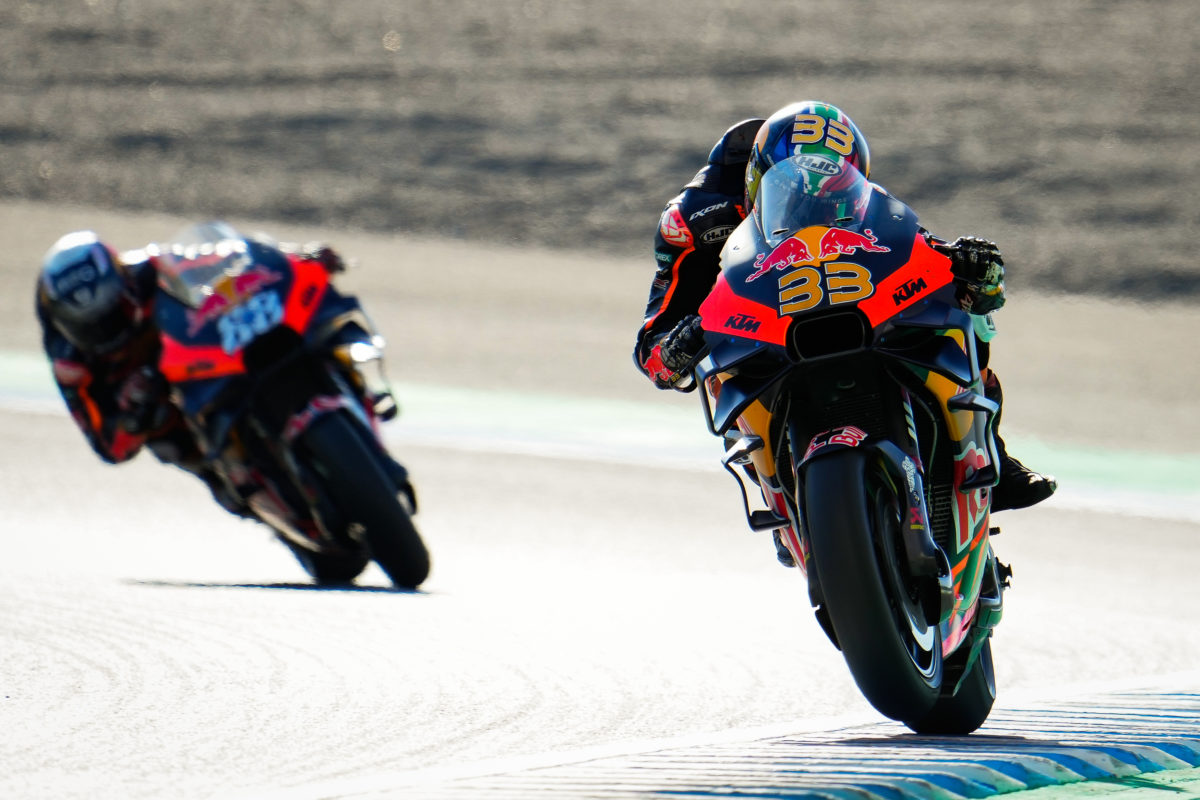 Brad Binder says that he and KTM “desperately needed” the podium which he achieved in the Japanese MotoGP.

Binder finished second at Motegi having run in the top four for all 24 laps after securing a maiden front row start in the premier class.

The podium is just his second all season, and KTM’s third, after he also finished second back in Round 1 at Lusail and Miguel Oliveira won Round 2 at Mandalika.

Oliveira finished fifth at Motegi, his best result in 11 rounds, having run as high as third.

“We’ve been working so hard this season and we haven’t got many good results, so to be standing back on the podium is an amazing feeling,” said Binder.

“It was tough out there; at the beginning of the race, I was really struggling a little bit to understand how hard I could push with the rear because it was the first time I’d done laps on the H [hard compound Michelin rear tyre].

“Clearly, I understood really well following Jorge [Martin] and Jack [Miller] at the beginning where we were losing time and where I was strong, so I was able to do laps behind them and really figure out where I needed to improve and use my strong points to my advantage.

“As the race went on I felt like I got better and better, and I need to say a massive thank you to my team for giving me the confidence to go with the H rear considering we’d never used it [during practice or qualifying].

“To walk away with a podium is fantastic. I pushed hard and fought hard from Lap 1 but, like I said, hats off to my team.

“They fought so hard, we needed this podium desperately and this is the start of many more.”

The South African passed Martin at the start of the final lap at which point the only rider ahead, five seconds clear, was the man who will join him at Red Bull KTM Factory Racing next year, Jack Miller.

The Australian dominated the race on his Ducati Lenovo Team entry, having had his switch to the Austrian marque announced in early-June.

“Congrats to Jack, he was on another level today,” declared Binder.

“When he passed me, he literally disappeared in about three or four laps.

“I could see he was on a roll and knowing Jack I thought he’d have the hard tyre too.

“Hats off to Jack and it’s going to be awesome having him in the team next year.”

In addition to Miller, plenty of technical know-how looks likely to head from Ducati, which already wrapped up the constructors’ championship at Aragon, to KTM at season’s end.

That includes the current crew chiefs of both Miller and his replacement at the factory team in Enea Bastianini, namely Christian Pupulin and Alberto Giribuola respectively.

In the riders’ championship, Miller is fifth and Binder sixth, ahead of this weekend’s Thailand Grand Prix at Buriram.