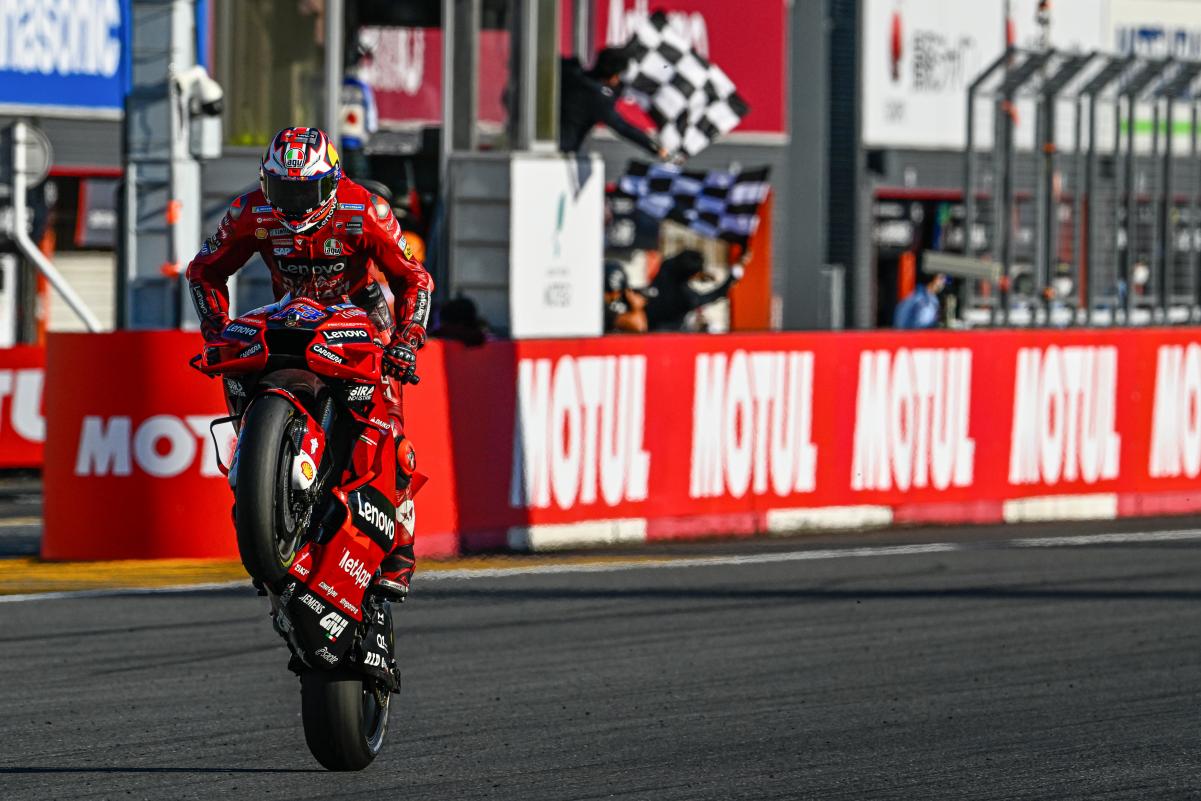 Despite qualifying seventh, the Ducati Lenovo Team’s Miller led by more than five seconds until he eased off on the final lap to seal a fourth premier class victory of his career with Brad Binder, his future team-mate at Red Bull KTM, second and Prima Pramac Ducati rider Jorge martin third.

However, Francesco Bagnaia (Ducati Lenovo), his nearest rival for the title, crashed while stalking the Frenchman on the 24th and final lap, and Aleix Espargaro (Aprilia Racing) also failed to score points when he could only get back to 16th from a pit lane start.

Binder had qualified on the front row for the first time in MotoGP and took the lead courtesy of the inside line into the first corner, with Martin passing Marquez for second through Turn 3.

Miller effectively inherited one position when Espargaro, who qualified sixth, pitted at the end of the warm up lap and swapped from one bike to another due to a technical problem, before passing the other Aprilia of Maverick Viñales at Turn 5.

The Queenslander got by both Miguel Oliveira (Red Bull KTM) and Marquez when they braked for the 90 Degree Corner (Turn 11) to take up third position, while Martin led as a result of a move on Binder at Turn 7.

Miller also outbraked Binder at the 90 Degree Corner on Lap 2, then did the same to Martin on Lap 3 to take over first position.

From there, he cleared out, leading by more than three seconds when Suzuki Ecstar’s Takuya Tsuda pulled off due to a fire on his GSX-RR on Lap 12.

There would be no red flag and #43 continued to disappear up the road, his advantage more than five seconds at the start of the final lap and officially 3.409 seconds at the chequers.

Binder was as low as fourth at one point but re-passed team-mate Oliveira and then caught back up to Martin, overtaking the #89 Desmoedici for second at the start of the final lap.

Marquez took fourth when he too got back ahead of Oliveira, getting under the #88 RC16 as they negotiated the V Corner (Turn 9) on Lap 22, leaving the Portuguese rider to finish fifth.

Luca Marini (Mooney VR46 Ducati) had an early stoush with Quartararo on his way to sixth, one position ahead of Viñales.

Unusually, Quartararo and the two form riders in the championship, Baganaia and Enea Bastianini (Gresini Ducati), were locked in battle for eighth in the closing stages after qualifying ninth, 12th, and 15th respectively.

There certainly appeared to be no team/manufacturer orders between the Ducati riders given the manner in which they were carving each other up, but Bagnaia was the cause of his own downfall when he clamped the stoppers too hard while perhaps looking for a move on Quartararo at Turn 3 on Lap 24.

‘El Diablo’ therefore held on to eighth, Bastianini moved up to ninth, and Marco Bezzecchi (Mooney VR46 Ducati) rounded out the top 10, while Johann Zarco (Prima Pramac Ducati) slipped from the front row to seventh on the opening lap and 11th by the finish.

In the championship, Quartararo’s lead is back up to 18 points over Bagnaia and 25, or the equivalent of a full race, over Espargaro.

Round 17, the Thailand Grand Prix, is next weekend at Buriram.