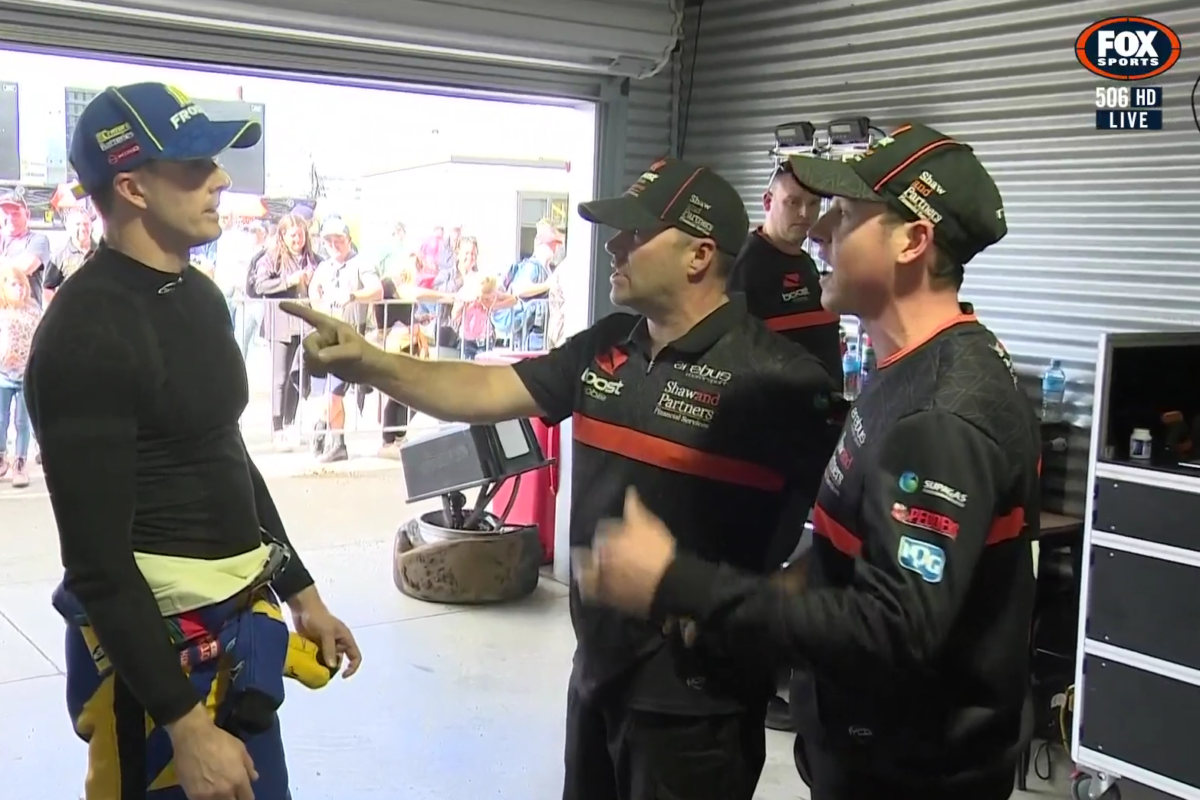 Barry Ryan has been officially reprimanded over his altercation with Mark Winterbottom in the Erebus Motorsport garage at the Pukekohe Supercars event.

A broadcast camera captured the Erebus CEO pushing Winterbottom after the Team 18 driver entered the garage following his incident with Will Brown in Race 28 of the Repco Supercars Championship at the ITM Auckland SuperSprint.

Motorsport Australia confirmed in the days after the event that an incident in the garage had been referred to stewards, with a decision on the matter now handed down.

Officially, the decision is, ‘Reprimand for the Authorised Representative of Erebus’, namely Ryan.

Stewards acknowledged that the situation was an emotionally charged one, given the on-track incident caused significant damage to Brown’s ZB Commodore and hence put Erebus’s Repco Bathurst 1000 wildcard entry in jeopardy, as well as having had the potential to severely injure Brown himself.

Furthermore, Winterbottom confirmed he “did not feel threatened or intimidated during the incident.”

However, the pushing was still determined to be a breach of Rule B6.5.1 of the Supercars Operations Manual, which states that “a person must not intentionally make physical contact, which includes any type of assault with another person, except in self-defence.”

Winterbottom and Brown had clashed on Lap 1 of Race 28, causing the latter to make heavy contact with the barriers at pit entry.

Stewards determined during the race that the Team 18 driver was guilty of ‘reckless driving’ and he was made to serve a drive-through penalty, although Ryan felt a licence suspension was a more deserving punishment.

While Brown suggested in a television interview that Winterbottom should visit the Erebus garage after the race to discuss the incident, the stewards report states that Ryan requested of his “counterpart” at Team 18 that the offending driver “not attend the Erebus garage because emotions within the Erebus team were high and the Team needed time to focus on assessing whether the Car was repairable.”

Regardless, Winterbottom was unaware of that request and proceeded to enter the Erebus garage with the intent of speaking to the driver he had knocked off the track.

“The first contact involved the Authorised Representative using the back of his hand to touch the Driver’s left arm to direct the Driver towards the door of the garage at the same time as asking the Driver to leave the garage.

“There was no force behind the push.

“The second contact occurred a short time later and involved the Authorised Representative pushing the Driver’s upper arm using the open face of his hand, again at the same time as asking the Driver to leave, the Driver having not left after the first contact.

“The second contact was evidently more forceful that the first because it pushed the Driver of Car 18 off balance, albeit slightly.”

Furthermore, the first contact was deemed “non-aggressive” whereas the second “went beyond the bounds of social norms”.

Winterbottom claims he would not have entered the garage had he known Ryan had asked that he not, with stewards noting “The combination of circumstances were unfortunate and arose out of a misunderstanding by the Driver of Car 18 that an open invitation had been extended to him to attend at the Erebus garage to discuss the Race 28 incident.”

The breach was established on the basis of the second push, and Ryan is said to have “acknowledged that he made an error of judgment and that physical contact with the Driver was unnecessary.”

As it turns out, Brown’s damaged car can be repaired in time for the Bathurst 1000, when he will pair up with Jack Perkins, meaning the wildcard entry for Greg Murphy/Richie Stanaway is also still on.

Erebus is planning on having both Car #9 and the #51 wildcard testing at Winton on Wednesday, September 28, pending repairs, while practice at Mount Panorama starts on Thursday, October 6.