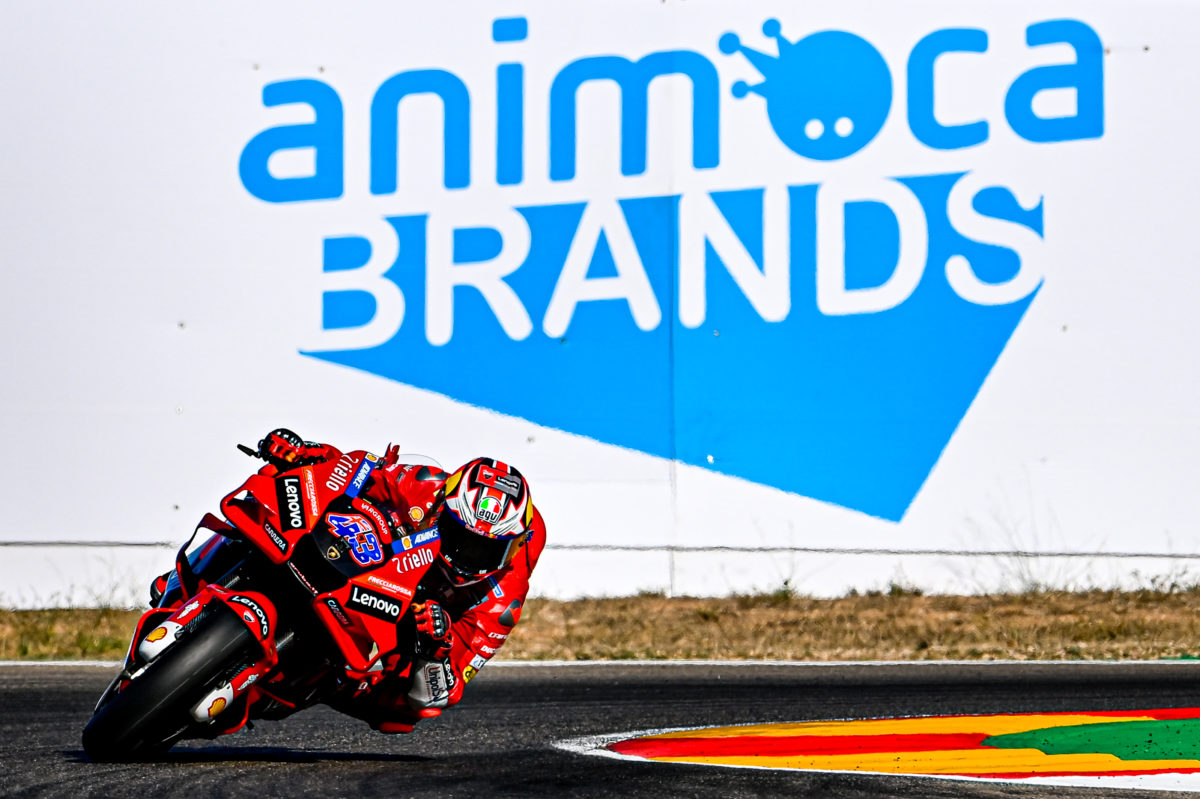 Jack Miller thought he had another MotoGP pole position before learning he had been pipped by Ducati team-mate Francesco Bagnaia by less than a tenth in qualifying at Aragon.

The Queenslander fired in a 1:46.159s just before the chequered flag flew on Qualifying 2 at the Aragon Grand Prix, well under the existing outright lap record of 1:46.322s.

However, moments earlier, Bagnaia had broken the beam in a time of 1:46.069s on the other Ducati Lenovo Team entry, meaning #63 on pole and #43 in the middle of the front row for Sunday’s race.

“Pretty happy with how Saturday went,” said Miller, who qualified fastest a fortnight earlier at Misano.

“I wasn’t particularly happy yesterday [Friday] sort of arvo – I was struggling a little bit – but we sort of analysed what we needed to work on and made some adjustments overnight and immediately this morning, I felt more comfortable with the bike.

“I was able to improve immediately in FP3, and then the [Q2] lap time, I threw everything I had at it, I thought it’d be enough, to be honest.

“I went over and I saw second as soon as I looked at the screen so I thought, ‘I don’t even know what the lap time had been,’ because I kind of surprised myself when I went through Sector 3, I think it said I was under by six tenths on my best lap time; I was pretty surprised with that.

“But no, the boys were all pushing. Even on the first tyre, the times had dropped immediately from what we had in the morning.

“I feel good, I feel like I’m ready, so we’ll just wait and see what tomorrow will bring.”

Ducati is now up to three rounds in a row with a front row lockout, given Gresini Racing’s Enea Bastianini qualified third-quickest at Aragon on his GP21-model Desmosedici.

Both Bagnaia and Miller put the form down to a new fairing, which has enhanced the turning of their bikes.

“From my point of view, I think the new fairing helps us a lot to close more the lines in the fast corners that we have here; like Turn 2, Turn 3, Turn 10, 12, 13, and last corner,” said the Aragon pole man.

“So, it’s helping us to be more inside with more corner speed, and it’s something that is helping a lot in this track.”

‘Jackass’ added, “Yeah, what he said, I think the fairing’s made a massive difference, especially for that reason.

“It finishes corners a lot better. Especially here, we were always fast on the last sector but simply because of the straight.

“That last corner, where you really need to turn the bike on the gas, was not an easy feat, and now with the new bike, we’re able to manage that a lot better.”

Bagnaia will be shooting for five wins in a row when lights go out tonight at 22:00 AEST.