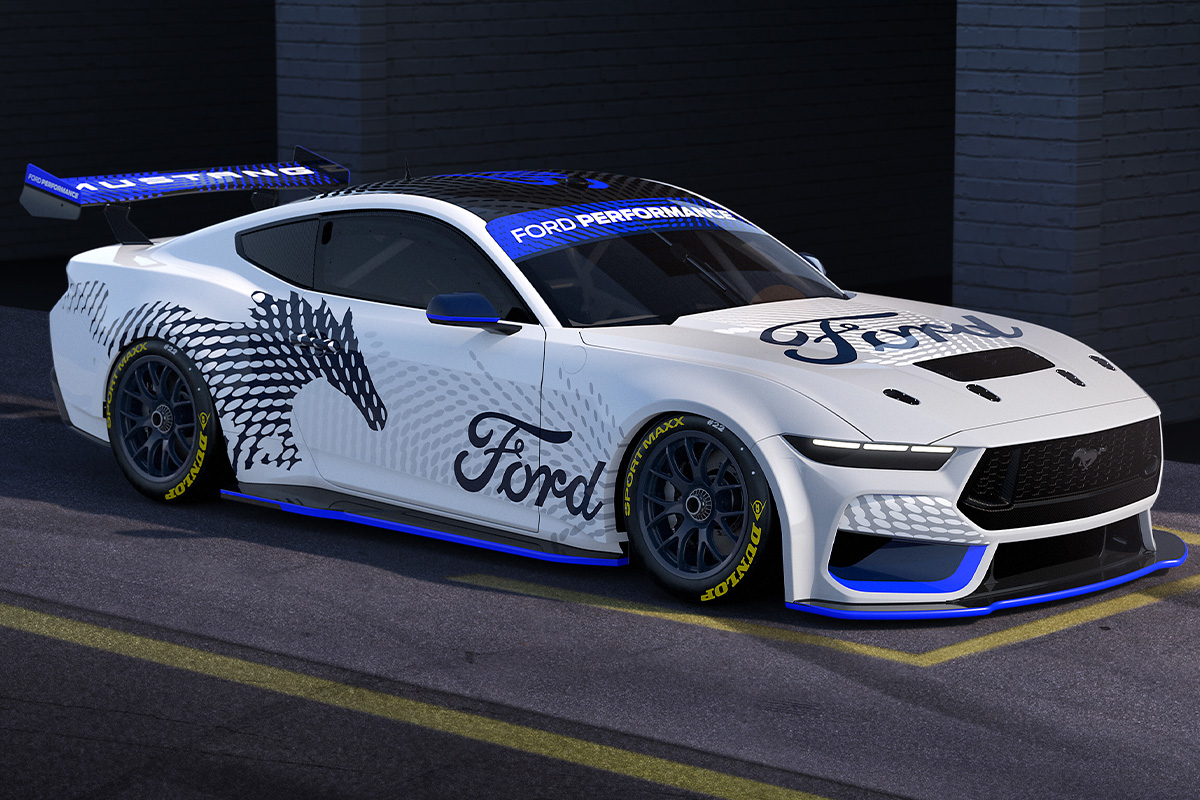 A new render of the Gen3 Ford Mustang

The new-shape Gen3 Ford Mustang is set to make its first public appearance at this year’s Repco Bathurst 1000.

Ford revealed the production version of the new Mustang, codenamed S650, at the Detroit Motor Show earlier this week, which will form the basis for the body of next year’s Gen3 Supercars entry from Ford.

Until now, the Gen3 Mustang prototype has featured the S550 bodywork, based upon the current road car that was introduced in 2018.

As reported by Speedcafe.com earlier this month, the S650 launch fell neatly into a gap in the Gen3 testing programme.

That has allowed time for the revised Gen3 control front clip to be changed over on the prototype, as well as updating the bodywork.

Ford homologation team, Dick Johnson Racing, is tasked with completing the conversion ahead its debut at Mount Panorama next month.

It will mark the first public appearance of an S650 race car anywhere in the world.

“We can say it will be at Bathurst, the Mustang, which is very exciting,” he said.

“DJR – and we work closely with all our teams – but certainly DJR is the homologation team, [and] they have been very close with the aero development with the body part design.

“The transformation of the car is well underway and on schedule for Bathurst.”

Once converted, Supercars will be able to complete the VCAT [Vehicle Control Aerodynamic Testing] process ahead of the 2023 season.

A preliminary VCAT was carried out on the Gen3 Mustang and Chevrolet Camaro in June, however, findings were not conclusive given that the Mustang used was the now previous S550 shape.

It is believed the VCAT process will be completed again after the Boost Mobile Gold Coast 500 (October 28-30) with the updated Mustang bodywork.

The road-going S650 Mustang reveal has been a key factor in the introduction of Gen3 in 2023, with Ford keen to avoid homologating an S550 for a single or part-season of competition, preferring Gen3’s arrival to coincide with the S650’s global introduction to showrooms.

It still worked on an S550 Gen3 Mustang to ensure it had a Mustang ready if Gen3 was introduced soon, however.

“It was two separate programs,” said Rushbrook of the S550 and S650 Gen3 designs.

“At one point, there was potential that we would have been racing the sixth-generation [S550] Mustang, so we did put full effort into that, just in case it did race.

“And also because we knew we would learn from it, from the team going through it, just in terms of learning the process with Supercars as well as learning the sensitivities, and there is enough significant difference in the new seventh-generation Mustang that it was an all-new program

“Again, the same engineers so they were able to carry over some of the learnings from it and do it probably more efficiently, but both were important for us to do it properly.

“We learned a lot and I think we have got a really good car now because of it.”