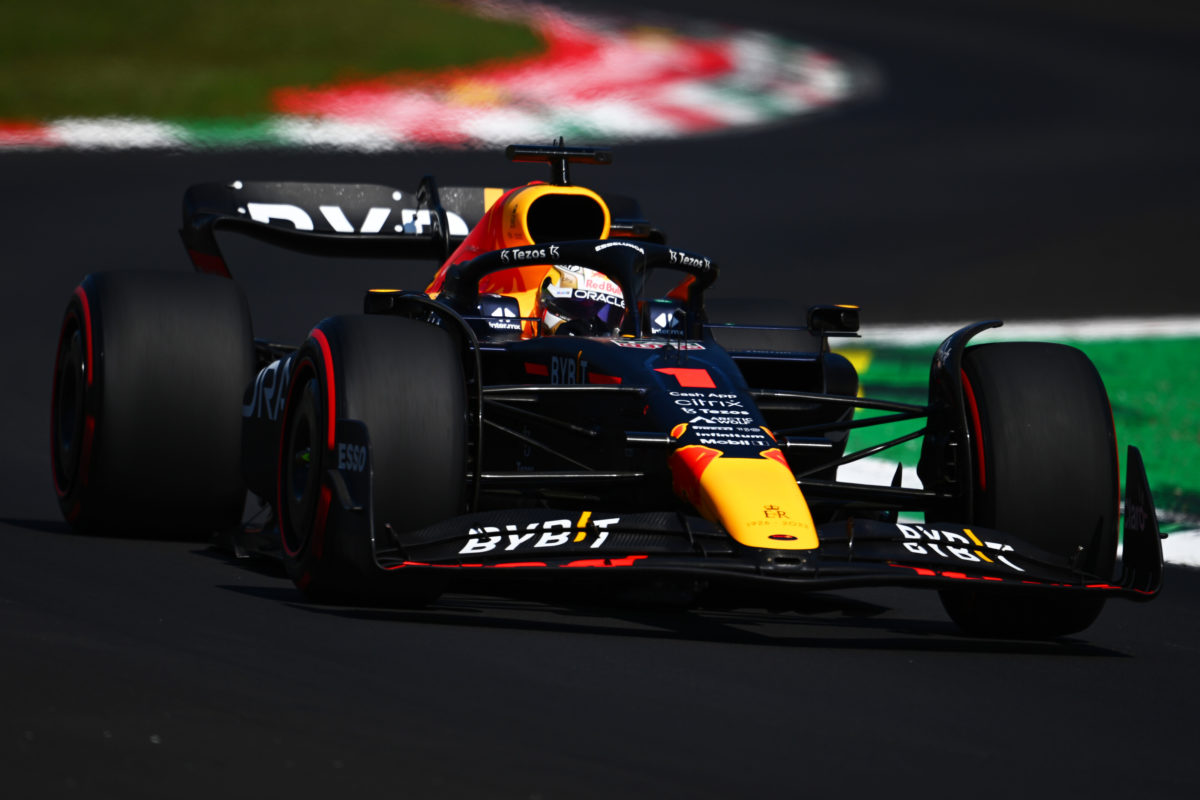 Max Verstappen has won an anticlimactic Formula 1 Italian Grand Prix which ended behind the Safety Car.

The Red Bull driver dominated the race, quickly rising through the field in the opening laps to command proceedings.

He saw off the strategic efforts of Ferrari and Charles Leclerc who finished second with George Russell holding on to third.

It was an unpopular climax with the Safety Car heading the field after Daniel Ricciardo was a late retirement, his McLaren stopping in an awkward place to quickly clear.

A poor start for Lando Norris saw the McLaren driver swamped as pole-sitter Leclerc headed the field into the opening chicane.

George Russell tried to go the long way around the Ferrari driver but couldn’t make it stick and was forced to cut behind the apex, as did a host of others in the pack.

Norris fell to seventh in the opening exchanges as Verstappen rose to fourth from his seventh place on the grid.

At the end of the opening lap, Leclerc headed Russell by 1.3s with Ricciardo third from Verstappen, Pierre Gasly, and Norris who’d recovered to sixth.

The championship leader moved into the podium places under braking for the Retifilo on Lap 2, scything up the inside of Ricciardo to take the place.

The McLaren driver quickly slipped away from the three leaders and soon found himself under pressure from Gasly.

Ricciardo was the leading runner on the medium compound tyres, those ahead having all started on the red sidewall soft tyres.

Verstappen was asking a lot of his, closing up on Russell to pass the Mercedes into the Retifilo as they began Lap 5.

In the pack, Carlos Sainz had risen to 11th from 18th on the grid in the opening five laps, all while on the medium compound tyre.

That saw the Ferrari driver soon latch onto the rear of the DRS train that had formed behind Ricciardo.

Stuck in the pack, Red Bull called Sergio Perez in for an early stop at the end of Lap 7.

The Mexican swapped onto the hard compound tyre with his car trailing smoke out of the right-front wheel.

There were concerns over his front brakes with advice over the radio suggesting he wind the brake balance rearwards.

Sainz’s charge continued and by the end of Lap 10 had seen him climb to seventh.

That became sixth as the Spaniard put a move on Norris into the Retifilo chicane at the start of Lap 11, the McLaren driver offering little in the way of defence against the storming Ferrari pilot.

Sebastian Vettel became the race’s first retirement when he pulled off the road on the run to Variante Ascari on Lap 11 with a smoking Aston Martin.

It triggered the Virtual Safety Car moments after Sainz had passed Gasly for fifth.

Race leader Leclerc took the opportunity to pit, swapping his soft tyres for a set of mediums.

As he headed down the pit lane, the green flag waved to resume racing, the former race leader rejoining just in front of Ricciardo in third place.

Leclerc was the only one to choose to pit, leaving him a 40-lap stint to the finish on the yellow-walled rubber.

Sainz moved into fourth with a move on Ricciardo into Ascari on Lap 13, the Australian losing out briefly to Gasly at the opening chicane on the next lap.

The Frenchman wasn’t able to make the corner, skating off and handing the place back to the McLaren driver.

Scuderia AlphaTauri called Gasly into the lane after 18 laps, switching him onto the hard compound tyres.

He fed out in 16th, behind Perez but with clear track ahead.

Covering off that move was McLaren as they boxed Ricciardo, and Williams with Nyck De Vries.

Ricciardo maintained his advantage over Gasly, whose undercut chances were hindered by a slow stop from Scuderia AlphaTauri.

Russell pitted after 23 laps to swap his soft tyres for a set of the hards, feeding out into clear track ahead of Norris.

Verstappen was in the lane soon after, putting after 25 laps for a set of medium tyres.

Leclerc regained the race lead as a result with a 10.2s advantage over Verstappen with both having stopped once.

Sainz ran third but was yet to pit with Russell fourth on the road – third in effect almost 24s off the front of the motor race.

The gap between Leclerc and Verstappen quickly shrunk, the latter closing in my a full second on Lap 27.

A lap later, a further half a second was eaten out of the advantage as the Red Bull continued closing back in.

Sainz finally stopped after 30 laps to swap onto a set of soft compound tyres, rejoining behind Perez.

Having complained of a lack of power earlier, Alonso was forced out of the race on Lap 32.

The Alpine driver was called into the lane where it was wheeled into the garage to become the race’s second retirement.

Leclerc pitted for a second time on Lap 33, swapping back onto the soft tyres for the 20-lap run to the flag.

A slow stop for Norris soon after saw the McLaren driver feed out narrowly in front of Gasly, who moved by at the Retifio chicane. Hamilton seized the opportunity to pas the pair.

The Mercedes driver put manners on Ricciardo into the opening chicane at the start of Lap 37, doing so as Norris passed Gasly for eighth.

It was a true eighth too, the field having completed the pit sequence to wash the running order.

Lance Stroll became the third retirement from the race when he was called into the lane to mark a double-DNF for Aston Martin.

Red Bull pitted Perez for a second time on Lap 43, bolting on another set of soft tyres as he dropped behind Norris and Hamilton into seventh place.

An engine problem for Daniel Ricciardo saw the McLaren driver roll to a halt between the two Lesmos on Lap 47.

The Australian had been running in eighth, his awkwardly placed car triggering the Safety Car.

Mercedes reacted by pitting Russell, while Sainz also took on a fresh set of soft boots.

Norris, Verstappen, and Leclerc also boxed, all moving onto the red-walled tyres.

It was a strategic no-brainer for Red Bull and Ferrari given they’d be vulnerable to Russell should there be a sprint to the chequered flag.

The race did not resume, the Safety Car heading the field to the chequered flag to see Verstappen claim victory.

Leclerc remained second from Russell who completed the podium.

Sainz remained fourth ahead of Hamilton, who’d risen from 19th on the grid, and Perez.

The top 10 was rounded out by Norris, Gasly, the impressive debutant de Vries, and Guanyu Zhou.