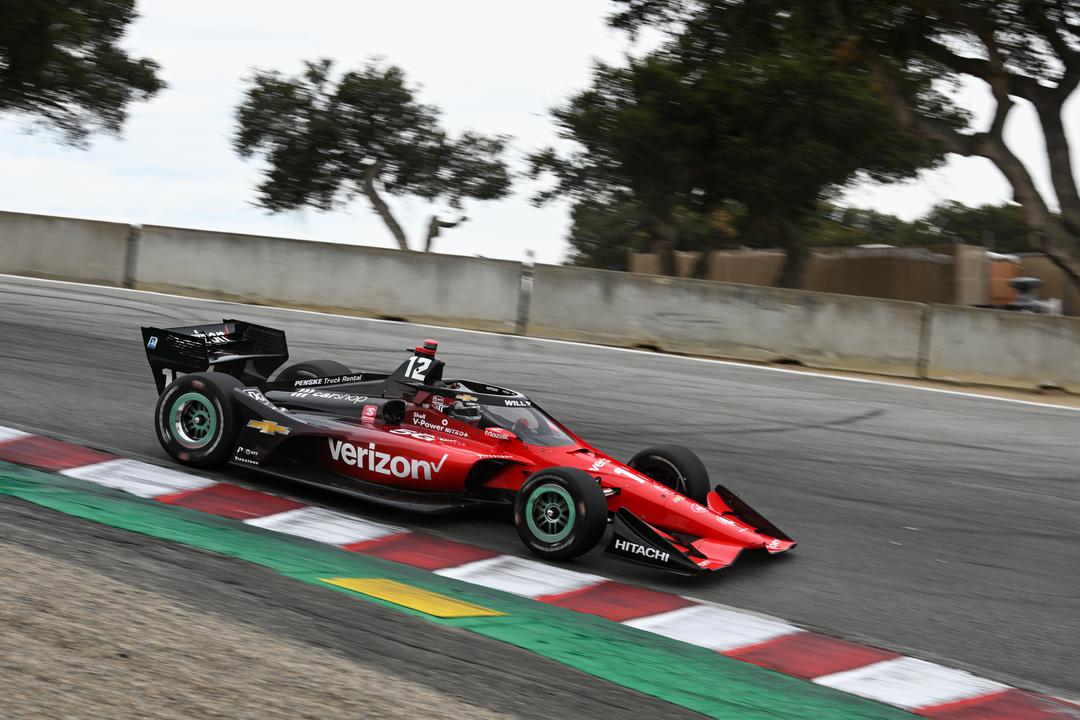 Team Penske’s Will Power has won the 2022 IndyCar Series after finishing third at Laguna Seca, behind Alex Palou and Josef Newgarden.

In a tense season finale, Newgarden gave himself a fighting chance from the last row of the grid before a Caution period played into his hands.

Armed with an extra set of new alternate tyres after a qualifying shocker, the two-time series winner overtook team-mate Power for second on Lap 46 and would stay there, in effective terms, for the remaining 49 laps.

The speed of the McLaren SP cars and also Andretti Autosport’s Romain Grosjean behind would likely have made Power nervous, but he managed to get home in third, a result which guaranteed him the title regardless of what anyone else did.

Last year’s champion, Palou, came to dominate the race in the #10 Chip Ganassi Racing Honda despite starting 11th due to a grid penalty, and took the chequered flag 30.3812s up on Newgarden, with the #12 Chevrolet 3.4716s further back.

The title is Power’s second in IndyCar, after the Queenslander prevailed also in 2014.

The top six had started on red tyres and Power made a good launch from pole position to take a clear lead through Turn 1.

Right behind, Alexander Rossi (Andretti) got a run on Callum Ilott (Juncos Hollinger Racing) and Pato O’Ward (McLaren SP) bought in as well, those three going as many wide into the Andretti Hairpin and emerging with #27 second, heading #5 and #77.

Power had moved 3.5s to the good when Rossi, who had in fact started on used reds, was passed by O’Ward on Lap 10 and then by Ilott on Lap 11.

Ericsson and Dixon both switched to blacks after just nine laps and the latter was soon covered by McLaughlin, while Rossi stopped for a set of sticker reds on Lap 13 and O’Ward for blacks on Lap 14.

Power reported his reds were “pretty much gone” before pitting for blacks on Lap 15 and Newgarden, who was yet to stop, let him resume a position ahead in fifth.

On Lap 24, the first cycle was complete, and Power led by 3.5s from a rising Palou, who was on reds.

The lead changed on Lap 27 when Palou went under Power at Turn 5 and the Spaniard charged to a seven-second advantage by the end of Lap 30.

Meanwhile, Newgarden had overtaken Dixon, who pitted for another set of blacks on Lap 29 and was covered by McLaughlin doing likewise on Lap 30.

Rossi had slipped to sixth when he stopped for more blacks on Lap 31, while Rosenqvist passed O’Ward for third on Lap 33, before Newgarden pitted from seventh to swap to blacks on Lap 35.

Ilott was fifth when he stopped on-track on Lap 38, drawing the leaders into the pits.

Once the Caution was called and the field compressed, Palou still led, from Power, Rosenqvist, O’Ward, Newgarden, McLaughlin, Grosjean, Ericsson, Christian Lundgaard (Rahal Letterman Lanigan Racing), and Dixon, with that top 10 all on blacks, although Power was on scuffed rubber versus Palou’s sticker set.

Palou had made contact with Rosenqvist as he exited his pit box but stewards opted for no further action, before the Lap 43 restart.

The leader launched well but Power had to run Rosenqvist wide down at the Andretti Hairpin in order to retain second spot, while Newgarden lunged past the other McLaren SP car for fourth at the Corkscrew.

He repeated the move on Car #7 a lap later and thus had team-mate Power immediately in front.

Newgarden promised to be “gentle” on his radio but still went for the Corkscrew move on Lap 46 and overtook #12 for second position, as Palou led by seven seconds.

Power quickly came under pressure from O’Ward, but got a slight reprieve when an also charging Grosjean dived past the Mexican for fourth at the Andretti Hairpin on Lap 48.

Things started to stabilise then, and Power would be told that Car #2 needed one more stop than he did.

That became highly likely on Lap 60 when Newgarden pitted, from eight seconds behind Palou and 12 ahead of Power, to swap to that extra set of sticker reds.

He resumed in sixth at about 10 seconds behind Power, as Ericsson and Dixon fought amongst themselves much further back, having already completed their third stops.

Newgarden was back up to third when he passed Grosjean on the run into the Corkscrew on Lap 67, by which time he was three seconds behind Power.

They were much closer when the Queenslander was into the lane on Lap 68 for his final stop and a set of sticker primaries, resuming in an official fourth, just ahead of McLaughlin and Ericsson.

Palou and Grosjean stopped on Lap 69, the former also onto sticker blacks before rejoining between Newgarden and Power, as Ericsson bumped his way past McLaughlin and then a red-shod Grosjean also overtook #3.

Newgarden was 25 seconds up on third-placed Power when he made his final pit stop at the end of Lap 73, taking a set of sticker blacks and emerging comfortably ahead of his team-mate.

With 20 laps to go, the scene for the run home was Palou by 21 seconds over Newgarden, who had 1.2s on Power, with Grosjean first on reds at another 2.1s behind.

Rosenqvist and O’Ward ran fifth and sixth, with Ericsson 10th, McLaughlin 11th, and Dixon 14th, all on blacks.

Grosjean got within a second of Power on Lap 83 but the split was out to two seconds on Lap 86.

Rosenqvist passed the Frenchman on Lap 88, as did Lundgaard on Lap 93, while Palou was 30 seconds up on Newgarden with three laps to go.

In the end, Palou scored his first win of the year in the last race of the year, from Newgarden, Power, and Rosenqvist, the latter at 1.6794s further back.

Lundgaard finished fifth, and McLaughlin barged his way past Rossi at the Andretti Hairpin on Lap 92 before overtaking Grosjean to claim sixth.