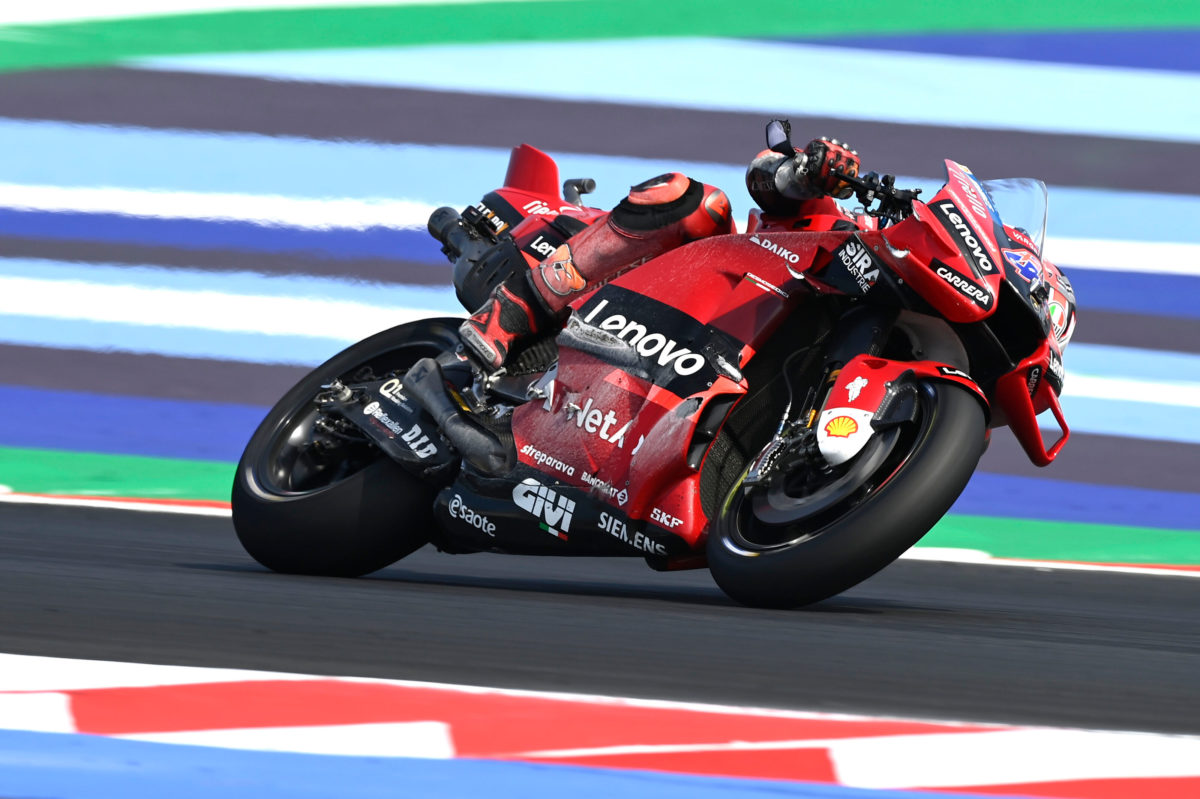 Jack Miller on a damaged Ducati after his Lap 2 crash

Jack Miller “basically shit [his] pants” when he found out how quickly Ducati stablemates Francesco Bagnaia and Enea Bastianini lapped Misano at the end of the San Marino MotoGP.

The Australian qualified on pole position and was leading the race when he crashed on Lap 2, leaving Gresini Racing’s Bastianini to inherit first position.

Miller’s Ducati Lenovo team-mate, Bagnaia, was in front when he overtook ‘La Bestia’ on the next lap, before they would engage in a nail-biting battle for victory.

In the closest finish of the year so far, ‘Pecco’ beat his future team-mate at the factory team to the chequered flag by 0.034s after 27 laps of racing.

Bastianini looked to have lost his shot when he wobbled under brakes at Rio (Turn 4) on the final lap, with the gap increasing to four tenths of a second.

A day earlier, Miller’s qualifying benchmark was a 1:31.899s, although that was set at the end of a session which began with light rain and most riders on wet Michelin tyres.

“I don’t want to say I was going to win today or anything like that [because] those two guys at the front… I came in and saw their lap times on the last lap and basically shit my pants, to be honest,” said ‘Jackass’

“Whether or not it was a missed opportunity, it’s better not to even think about it.

“Just take the positives of the steps we made on the bike this weekend, the way that I’m feeling on the bike at the moment, and that’s it.

“I’ll try to learn from it. I was pushing there at the beginning, trying to get away a little bit or at least break the group up and that can happen.

“Not the day we had anticipated, but anyway, that’s the way the cookie crumbled.”

Elaborating on the crash, a front-end washout at a slow right-hander, he explained, “I was a little bit wide coming out of [Turn] 3, didn’t really think too much of it.

“Was coming in a little bit hot at [Turn] 4, like it is sometimes with the first couple laps, just not decelerating maybe the way you like and came in wide off the kerb.

“All weekend, even if I was running wide, I was able to slide the bike to the apex.

“But I came off the kerb and the thing started doing ‘this’ a little bit and I knew I was on the limit and, yeah, she went away from me.”

Miller remounted and finished on the lead lap, but scored no points given he got home in 18th.

“I picked the bike up, continued, but riding one of these monsters with no rear brake and no wings on one side was a little bit of a handful, because the wheelie was pretty full on,” he added.

“But I didn’t give up, kept pushing to the end and the bike felt good, considering. The grip felt good.

“It just makes you more hungry for what could have been.”

Miller drops to sixth in the championship ahead of a two-day test at Misano from tomorrow, then Round 15 at Aragon on September 16-18.