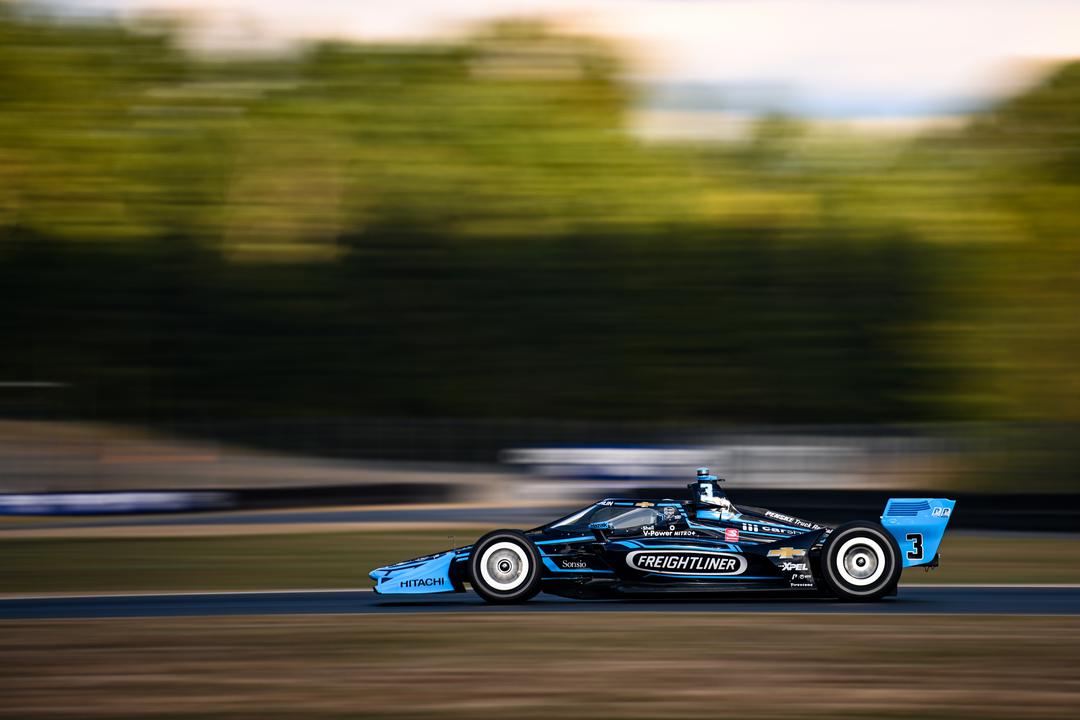 Team Penske’s Scott McLaughlin has won the penultimate race of the IndyCar season at Portland as team-mate Will Power extended his series lead by finishing second.

McLaughlin effectively led all 110 laps while Power survived a big scare when Pato O’Ward ran into him in an appropriately desperate bid to keep his title hopes alive at the restart from the afternoon’s sole Caution period, on Lap 89.

Chip Ganassi Racing’s Scott Dixon finished third from 16th on the grid to move into a tie for second in the series standings with Penske’s Josef Newgarden, who started eighth, rose to fourth, and then fell back to eighth in the final stint.

O’Ward is officially out of title contention after finishing fourth in his McLaren SP entry, as is Alex Palou having taken the chequers in 12th, while Marcus Ericsson’s hopes are slim given he was 11th on the day.

Power will therefore take a 20-point lead over Newgarden and Dixon to Laguna Seca next weekend, with Ericsson fourth at 39 points back from the Australian and McLaughlin also still alive at 41 points off the pace.

IndyCar had moved the start location back to Turn 12 in a bid to avoid major carnage at the chicane, and it was indeed clean there on Lap 1.

Pole-sitter McLaughlin led the field into Turn 1, where fellow front row starter Power went to the outside, but he got passed by Christian Lundgaard (Rahal Letterman Lanigan Racing) off Turn 2 and dropped to third.

At the end of Lap 1, O’Ward was fourth, from Palou, David Malukas (Dale Coyne Racing w/ HMD Motorsports), and Felix Rosenqvist (McLaren SP), with all of the aforementioned on red tyres except O’Ward.

Newgarden (blacks) had dropped from eighth at the green flag to 10th and would then cede that spot to Graham Rahal (RLLR, reds) as they ran towards Turn 1 on Lap 4, while Dixon and Ericsson sat 14th and 19th respectively, on blacks, after qualifying poorly.

Newgarden did the same on Lap 14, before Power was in on Lap 17 from more than four seconds off the race lead to change to scuffed reds, as did McLaughlin when he pitted from a 3.7s lead on Lap 21.

Lundgaard, who had started on scuffed reds, switched to a new set on Lap 22 but a slow fuel nozzle out was costly for Car #30 as he rejoined behind Power.

With most of the cycle done at the end of Lap 24, McLaughlin led from a long-running Ericsson, then Power at over five seconds back in an effective second position, from Lundgaard, O’Ward (sticker reds), Palou (sticker reds), and Newgarden (sticker reds), with Dixon 11th but effectively 10th.

When Ericsson finally stopped on Lap 32 for new reds, McLaughlin’s lead over Power was 7.8s as Car #8 resumed in 18th.

His advantage grew beyond eight seconds at one point before the 2014 champion started to pare back the margin, as Newgarden and then Rahal passed Palou for fifth and sixth respectively at Turn 9 on consecutive laps.

Newgarden and Dixon, who was ninth, stopped for used reds on Lap 45, and Lundgaard for blacks on Lap 47, having trailed McLaughlin by 12.6s when he peeled off.

McLaughlin and Power were 5.7s apart when they pitted together on Lap 48, with both taking blacks as, further down the lane, O’Ward took another set of reds.

The effective top two was as you were but O’Ward got back out just ahead of Lundgaard, who would cede fourth to Newgarden when the Penske driver got on the push-to-pass button at the start of Lap 55.

With 60 laps in the books and the second pit cycle not long done, McLaughlin headed Power by 4.8s and O’Ward by 7.0s, with Newgarden third and Lundgaard (blacks) fourth, while Dixon ran eighth, Palou (blacks) was 11th and fading with poor balance in Car #10, and Ericsson was 16th.

By Lap 66, McLaughlin was maintaining his margin over Power but O’Ward had closed to within a second of the Australian, who furthermore had used a lot of push-to-pass clearing the lapped Dalton Kellett (AJ Foyt Racing).

Ironically, Ganassi’s Jimmie Johnson helped to spread them out again when they lapped the team-mate of Penske’s title rivals on Lap 70, and even allowed Newgarden to briefly close in on O’Ward.

On Lap 76, Power was within four seconds of McLaughlin but more than two seconds ahead of O’Ward again, and he soon got another gift when his Kiwi team-mate got held up as Rosenqvist exited the pits.

Lundgaard and Dixon took their third pit stops on Lap 78, before the top four all came in a lap later, with the top three all taking what appeared to be used reds.

They resumed with McLaughlin and Power just a second apart, and that was still the case when a Caution was called on Lap 84 after Rinus VeeKay (Ed Carpenter Racing) forced Johnson into the wall on the run to Turn 1.

Under the yellow flag, it was McLaughlin from Power, O’Ward, Newgarden, Alexander Rossi (Andretti Autosport), Dixon, Rahal, Colton Herta (Andretti w/ Curb-Agajanian), VeeKay, and Lundgaard, with only Newgarden on blacks in that top 10.

O’Ward simply had to pass Power to keep his title hopes alive, and so it was that he made a big lunge at the #12 Chevrolet when the race restarted on Lap 89.

They made contact at the Chicane but Power held second position and O’Ward would incur sidepod damage, plus a position drop penalty for the manner in which he blocked Dixon exiting the complex.

The net result of the messy exchange was McLaughlin with a roughly 1.5s lead from Power, Dixon in third and O’Ward fourth once the penalty had been served, then Newgarden, Rahal, and Rossi.

Newgarden had not only the harder tyres but also very low push-to-pass reserves and he began to drop like a stone, losing the tie with Dixon for second place in the live series standings when Lundgaard passed him for eighth into the Chicane on Lap 93.

He got it back two laps later when Lundgaard outbraked not only Rossi and the Chicane but also himself, picking up one of the signs which marks out the run-off area and having to pit.

With five laps to go, Power got back within a second of McLaughlin, although he had less push-to-pass left.

McLaughlin responded and Dixon closed to about 0.5s behind the #12 Chevrolet on the penultimate lap, but there would be no change for the podium positions.

McLaughlin’s official margin of victory was 1.1792s, with Power getting home only 0.4214s up on Dixon.

O’Ward finished a distant fourth, Rahal climbed to fifth, and Herta snuck into sixth with some moves not long after the restart.

Rossi finished seventh, ahead of Newgarden, Callum Ilott (Juncos Hollinger Racing), and Rosenqvist, while Ericsson passed Palou for 11th on Lap 101 and that was where they stayed.

VeeKay finished 20th after copping a drive-through penalty for the incident with Johnson, and Lundgaard ended up classified in 21st.