McLaughlin not giving a win away to help team-mates

McLaughlin not giving a win away to help team-mates Scott McLaughlin is prioritising winning the Portland race for himself, although he is willing to help his Team Penske team-mates win the IndyCar Series.

Will Power has taken a three-point lead to the penultimate event of the season with fellow Penske driver Josef Newgarden second in the standings while McLaughlin is back in sixth.

However, Power and Newgarden have to worry about more than just each other, with three Chip Ganassi Racing drivers all within striking distance.

Scott Dixon is just 14 points off the pace, Marcus Ericsson another three back, and Alex Palou 43 points in arrears of top spot with a total of 54 points on offer this weekend in Portland and another 54 a week later at Laguna Seca.

Power and Newgarden have both committed to putting the team first, much as they have their own personal ambitions, and McLaughlin has now stated that he is willing to work for the greater good also.

Still, he is not necessarily ready to complete roll over.

“We know what we need to do as a team,” the New Zealander said on Peacock during Practice 1 at Portland.

“We need to maximise every point, every chance we get in the race.

“If I find myself in the lead, absolutely, I’m going to try and win the race, but at the same time, we’ll do what we need to do to maximise the most amount of points for the team.”

A win pays 50 points while second place is worth 40, with points also on offer for qualifying on pole and leading laps of the race.

When it was put to McLaughlin that winning would help his team-mates, presumably by denying each Ganassi driver at least 10 points, he responded, “Ultimately, I’m here to win the race.” 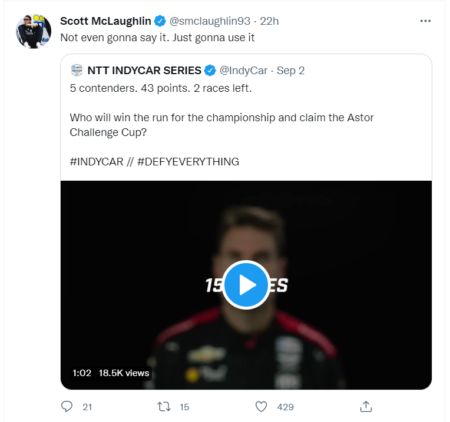 Mathematically, seven drivers are still in the hunt for the IndyCar title, although his and Pato O’Ward’s hopes are particularly slim considering they trail Power by 54 and 58 points, respectively.

Nevertheless, McLaughlin took umbrage at the insinuation in an official IndyCar social media post that there are “5 contenders”, writing on Twitter, “Not even gonna say it. Just gonna use it.”

The three-time Supercars champion explained, “At the end of the day, I’m mathematically a chance, so I’m just pointing out facts.

“Anyway, we’ll use that as a bit of a pump-up, but realistically, we just want to have a solid end to the year, and if things happen and we have a good race, who knows what will happen?

“But, I just had to correct a tweet there.”

McLaughlin would go on to take third in opening practice, 0.1387s behind Newgarden, who set the pace.

Practice 2 starts on Sunday morning at 02:00 AEST, then Qualifying at 05:05 AEST, with both of those sessions live and ad-free on Stan Sport.