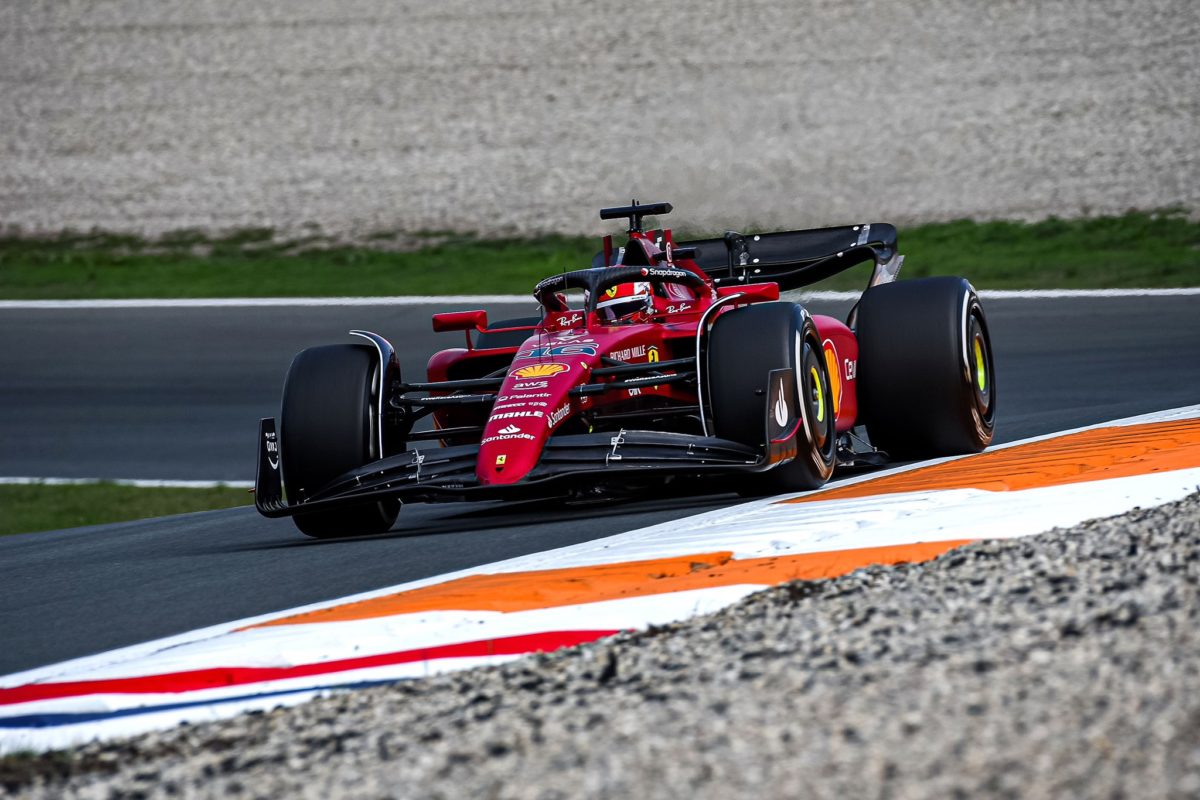 Ferrari recorded a one-two in Free Practice 2 at the Formula 1 Dutch Grand Prix, Charles Leclerc ahead of Carlos Sainz.

Championship leader Max Verstappen was only eighth fastest as he looked to make up the time he lost in the earlier session.

Lewis Hamilton was third best and Lando Norris fourth with the top four split by scarcely more that 0.1s.

Verstappen was out on track early after Red Bull repaired the transmission fault that halted his progress in Free Practice 1.

He did so on a set of soft compound tyres and quickly moved to the top of the timing sheets.

The Dutchman’s lap was therefore something of an outlier given much of the field was out on the medium tyres.

The Ferrari driver soon improved to record a 1:13.412s to move up to the top of the standings.

Charles Leclerc in the second Ferrari also went faster than Verstappen with a time just 0.025s off Sainz’s session best.

Sainz then improved to a 1:12.349s when he switched to the soft compound tyres to put himself a second clear of anyone else.

That reduced slightly when Verstappen completed his qualifying simulation run, though the margin remained a sizeable 0.693s as Leclerc slipped to third.

Soon after, Fernando Alonso improved to go second fastest, 0.499s down on Sainz, only for George Russell to demote the Alpine driver moments later.

Hamilton got closest to Sainz’s lap, the Mercedes driver just 0.68s away from the Ferrari on his first flying lap.

Lando Norris went third best just after the halfway point of proceedings, a time which quickly became fourth as Leclerc went 0.004s clear of his team-mate at the top of the timesheets.

With 20 minutes remaining, Verstappen headed back out on a set of soft tyres to begin a race simulation.

Daniel Ricciardo was stuck in the garage as mechanics worked to repair an apparent leak on the left-hand sidepod of the McLaren. The Australian climbed out of the car with 15 minutes remaining, his session over.

Attentions had turned to long-run pace for those remaining in the session.

Yuki Tsunoda found the gravel and buried the rear axle at Bocht 10 to draw the red flag.

Four minutes remained on the clock when the session resumed.

All but Ricciardo and Tsunoda ventured out for the final moments though none set the timing screens alight.

And so it ended with a Ferrari one-two with Leclerc ahead of Sainz, followed by Hamilton.

Verstappen was only eighth fastest while his Red Bull team-mate, Sergio Perez, was only 12th.