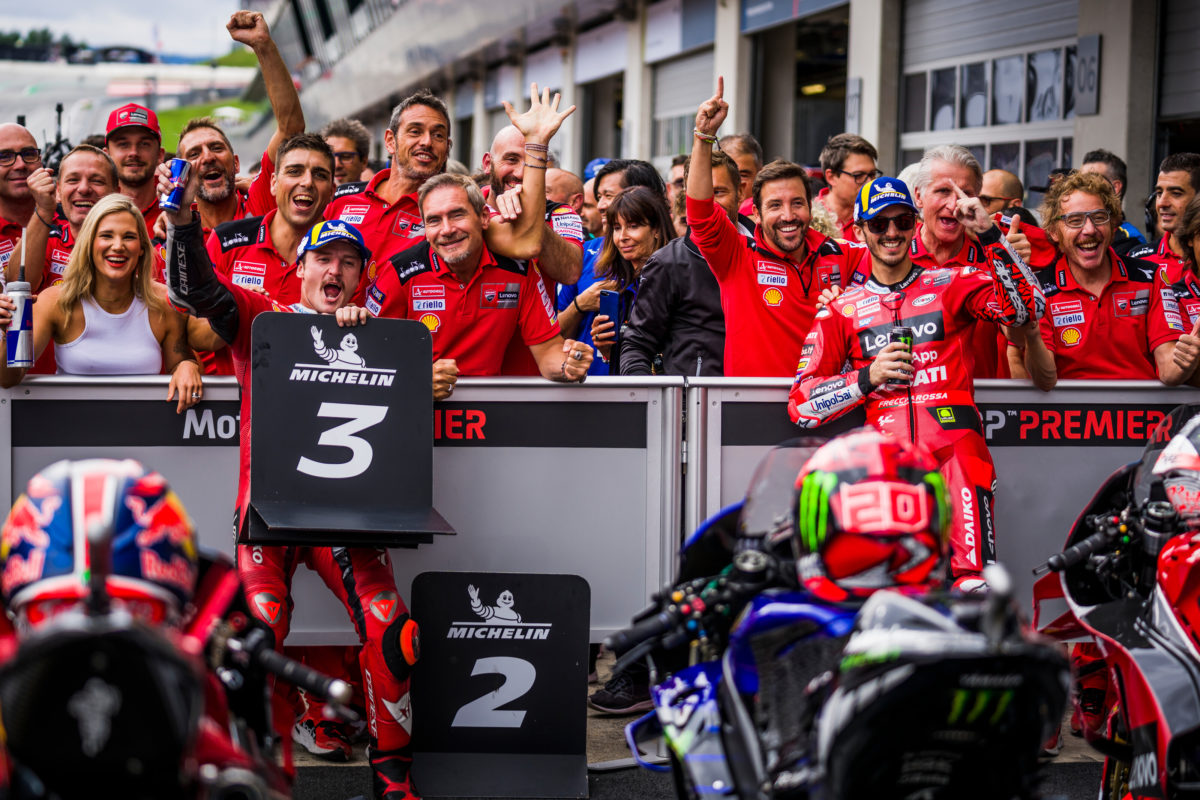 Bagnaia has won the last three races and while he is still 44 points in arrears of championship leader Fabio Quartararo, it is a deficit which has been slashed by 47 points over the course of those grands prix in The Netherlands, Great Britain, and Austria.

As had been expected before the season got underway, he is now statistically Ducati’s best hope for its second MotoGP riders’ crown, having overtaken Pramac Racing’s Johann Zarco with the second of those victories, at Silverstone.

Meanwhile, Miller has hit a purple patch of his own with three podiums, all third placings, in the last four events, moving up to fifth in the standings at two points behind Zarco.

While the Australian did make one unsuccessful attempt to pass ‘Pecco’ for the race lead last time out at the Red Bull Ring, and while he is leaving the Bologna marque at season’s end to ride for Red Bull KTM Factory Racing, he is happy to play the team game in Bagnaia’s campaign.

“It’s just amazing to be a part of it, even if we are playing number two, ‘Goose’ to his ‘Maverick’,” said Miller, referring to the bond between two characters in the Top Gun film.

“It’s cool to be a part of, and hopefully we can keep this momentum and the good vibes in the team going through to the end of the year.

“Because, I feel when we’re happy and gelling like this, it’s bringing the team’s results better, it brings the morale up in the box, and I think with that all happening, everyone’s super-happy to do the work and we’re getting the results, so it’s awesome to see.”

Miller’s run of third, sixth, third, and third in the last four grands prix is in stark contrast to the two races prior, when he was 15th at Mugello and a “shithouse” 14th at Catalunya.

The Barcelona round was followed immediately by a post-race test, where he and the Ducati Lenovo Team figured out a new handlebar position, which appears to have done the trick.

“Since we’ve come back from that test in Barcelona, every week it’s been there or thereabouts, no matter the circumstances, with long laps [penalties] or whatever included,” remarked ‘Jackass’.

Miller has seven MotoGP races left with Ducati before he bids farewell to the manufacturer with a cameo in the Australian Superbike Championship at The Bend in November.