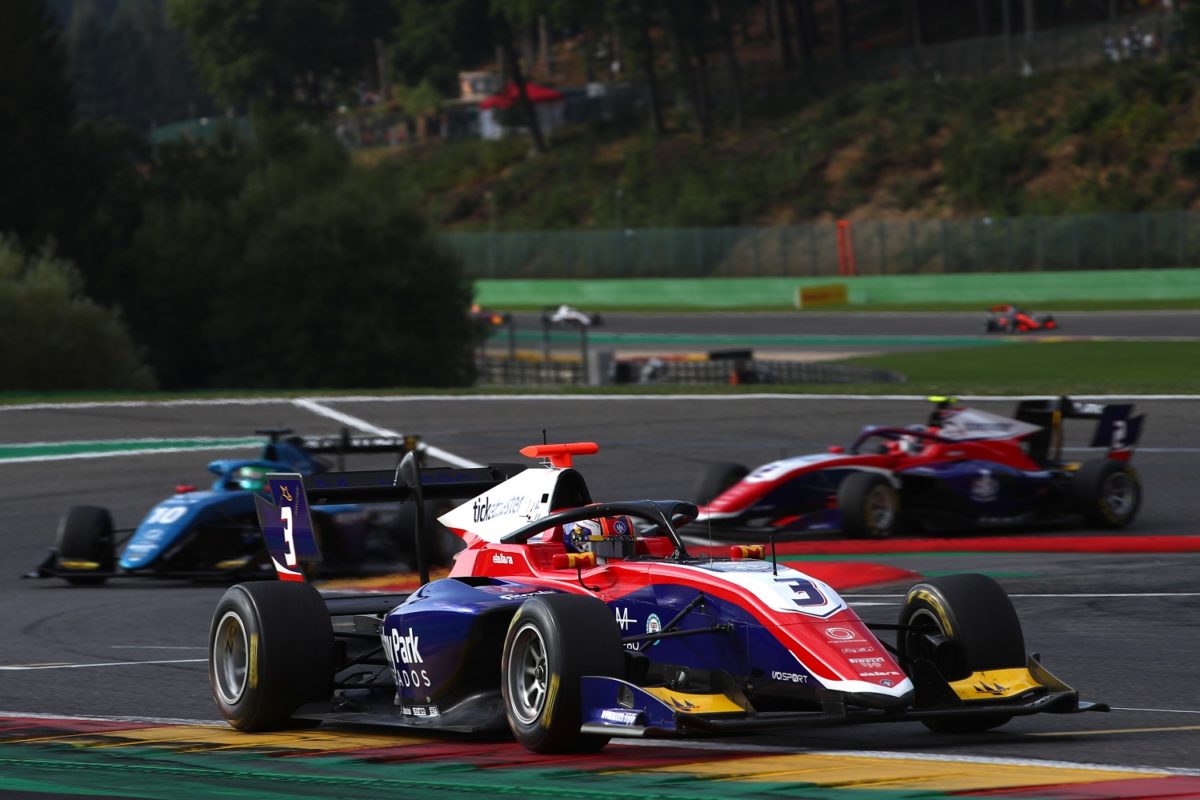 Trident team-mates Zane Maloney and Roman Stanek took the top two steps of the podium in a championship-changing Formula 3 Feature Race around Spa-Francorchamps.

Jonny Edgar finished in fifth, helping Trident with a huge points haul in the teams’ championship as they continue to be the most successful F3 team around the Belgium track, winning eight times.

Maloney had a fantastic charge to first place, bouncing back from his terrifying crash in the Sprint Race earlier in the weekend to collect his maiden win in FIA Formula 3.

The Barbadian first took the lead in Lap 1 but was instructed to give back the position the next lap due to gaining an advantage off the track.

Maloney was able to retake the lead in a Lap 10 restart from polesitter Caio Collet, the race winner also clinching the Fastest Lap of the race.

Collet had a good start to his race and crossed the finish line in third, but a penalty for entering the track unsafely saw Ollie Bearman inherit third from the MP Motorsport driver.

Bearman had a triumphant weekend around Spa, winning the Sprint Race and finishing P3 in the Feature.

It has firmly placed him in championship contention, leaving this track with 105 points, only one point off Isack Hadjar who leads the standings.

Lap 1 saw a collision between Kush Maini of MP Motorsport and Francesco Pizzi who started third.

When re-joining the track, Maini again collided with another driver, this time championship hopeful Victor Martins, who left the weekend having scored no points.

The incident brought the Safety Car out at the end of Lap 1 and caused Martins and Jenzer Motorsport’s Ido Cohen to DNF.

Federico Malvestiti in the other Jenzer received a puncture in the chaos and had to pit under the Safety Car, crossing the finishing line in 26th and last at the chequered flag.

Rookie Oliver Goethe ended up leading the pack after this incident, restarting the race on Lap 5 but was quickly overtaken by Collet and Maloney and concluded his weekend with a fifth place finish.

Gregor Saucy tangled with Josep Maria Marti into Turn 7, which finished up the ART Grand Prix drivers stint as he became stricken within the gravel and collided with the wall to draw the Safety Car on Lap 7.

The race result means the top seven of the F3 Championship have been moved around; Hadjar leading on 106 points is just one point from Prema’s Bearman.

Martins held on to third in the title fight and Arthur Leclerc made his way to the top four with 101 points.

Formula 3 is back next weekend in Zandvoort for Round Eight of the FIA F3 Championship.