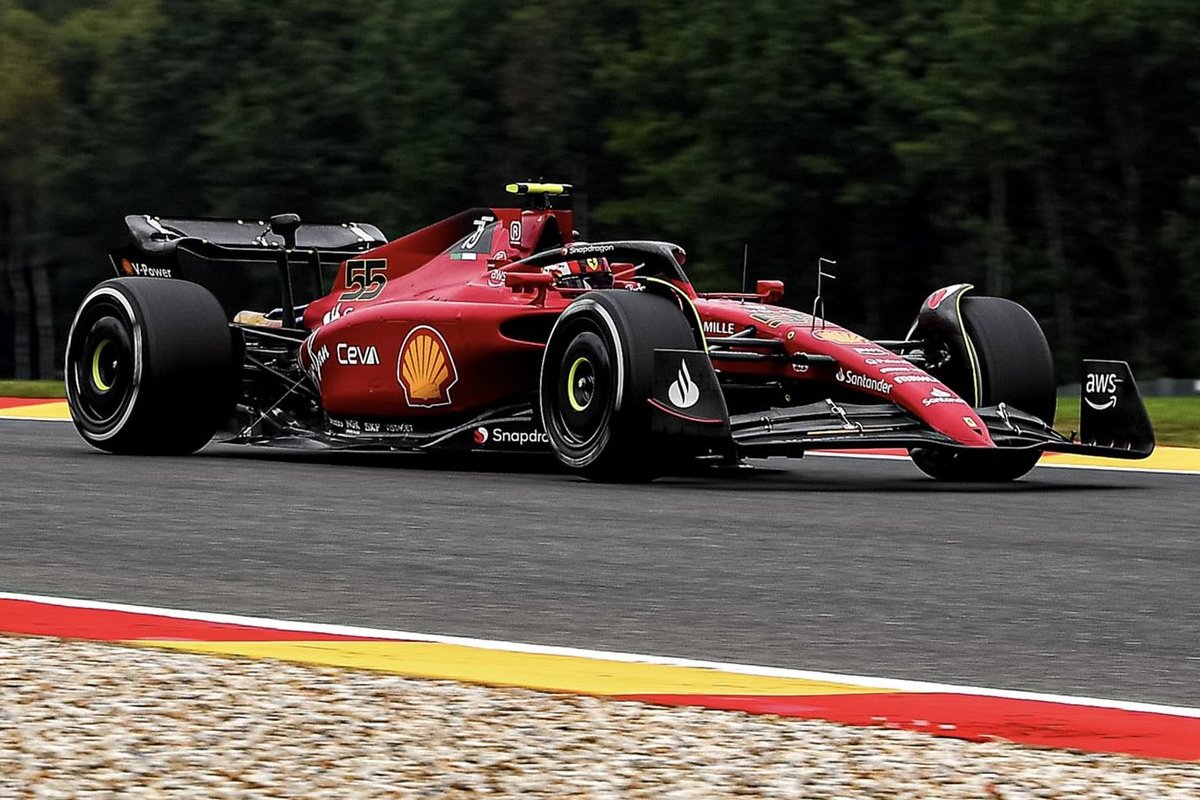 The Ferrari pair topped a session that was, in reality, ended by a red flag when Kevin Magnussen rolled to a halt exiting La Source with 23 minutes remaining.

Though the session resumed after a length red flag, the skies opened and curtailed any meaningful running.

Officially, the circuit had ‘low grip conditions’ before the session started, though the rain itself held off initially.

Even still, intermediate tyres were the choice of most initially, completing an installation lap and pitting for a set of slick tyres.

That saw hards for Sainz and softs for Fernando Alonso in the early minutes.

It was a notable session for Liam Lawson, the New Zealander making his Formula 1 race weekend debut in Pierre Gasly’s Scuderia AlphaTauri.

Given the sub-optimal conditions, it took a few minutes before any meaningful laps were completed, Sainz the first of those with a 1:50.958s.

That stood only until Lando Norris set a 1:49.712s on a set of the soft compound tyres.

McLaren has a raft of upgrades this weekend, many circuit-specific including a new rear wing and engine cover.

All 10 teams had updates, while at Mercedes a set of development mirrors were fitted to Lewis Hamilton’s car.

The large design offered something of a glimpse of 2023 when the regulations mandate larger mirrors to improve visibility and safety.

In the pit lane, Nicholas Latifi was released into the path of Max Verstappen who was forced to take avoiding action, a moment which the stewards noted but otherwise felt no need to act upon.

On track, Verstappen had gone fastest a third of the way into proceedings, a 1:46.755s set on the soft compound rubber.

It left him well clear of anybody else, Sainz second best but 2.3s away on the hard rubber.

A problem for Esteban Ocon saw the Frenchman climb out of his Alpine with 35 minutes remaining, the team focused on the left-rear of his car.

He is one of the six drivers heading into Free Practice 1 carrying power unit penalties, together with Valtteri Bottas, Charles Leclerc, Lando Norris, Mick Schumacher, and Max Verstappen.

A problem for Magnussen saw the Haas driver stop out on track, rolling to a halt on the exit of La Source with 23 minutes remaining.

It proved a lengthy interruption as the electrical system on the Haas was active, forcing team mechanics out on track to make the car safe.

The session eventually restarted with nine minutes remaining with Sainz sat atop the timesheets, his 1:46.538s set just before the stoppage.

The rain that had threatened earlier finally arrived as the green light at pit exit was shown, the Fagnes and Stavelot end of the circuit first to receive the downpour.

It saw the field, or that of it which had headed out, trundle back to the pits and see out the session from the garage.

A handful did venture out, the the worsening conditions meant it afforded little beyond an opportunity to crash.