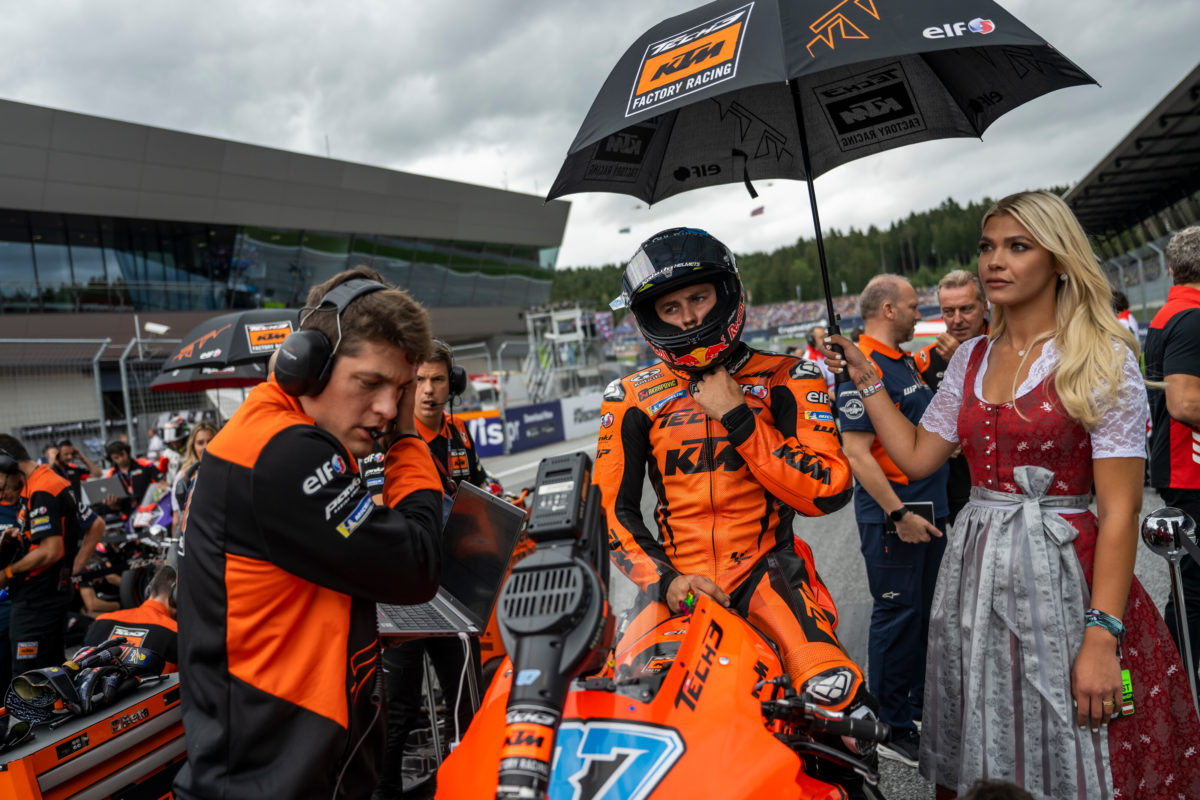 Remy Gardner will “certainly” not be riding for GasGas in MotoGP next year, regardless of Miguel Oliveira’s decision.

That is the word from KTM CEO Stefan Pierer, as the Austrian group awaits a decision from Oliveira on his latest contract offer.

The four-time MotoGP race winner re-emerged as a shock contender to join Tech3 for the 2023 MotoGP season during the launch of GasGas Factory Racing at KTM’s home event at the Red Bull Ring.

Oliveira moved up to Red Bull KTM Factory Racing in 2021 and had turned up his nose at the idea of a return to Tech3 in order to make room for the arrival of Jack Miller from Ducati.

However, KTM hopes that the rebranding of the satellite team as the factory squad of one of its sister marques, which will have a presence in the premier class for the first time, will help change his mind.

Gardner admitted in Austria that it “doesn’t look like there’s anything” for him in MotoGP next year, with KTM Ajo’s Moto2 title contender, Augusto Fernandez, also in the frame for the as yet unfilled Tech3/GasGas ride.

“Certainly not Gardner,” said Pierer, when asked who gets the seat alongside Pol Espargaro, if not Oliveira.

That much does stand to reason, given Gardner’s pessimism about his future in the premier class.

It is also not particularly surprising considering the far from harmonious relationship between the 2021 Moto2 champion’s manager, Paco Sanchez, and KTM.

Oliveira had been widely expected to be riding an Aprilia for RNF Racing next year, until the bombshell which KTM Motorsports Director Pit Beirer dropped at the Red Bull Ring.

Indeed, that is still what the Austrian marque thinks is the most likely course, according to Pierer, despite the lure of a three-year contract.

“I don’t think that Miguel will race with us in 2023 because he signed a letter of intent at Aprilia,” he predicted.

“We offered him a new three-year contract so that he would have stability and build the GasGas project together with Pol,” added Pierer.

“The ball is in his hands.”

KTM board member Hubert Trunkenpolz told Speedweek.com in the same interview that “We’ll get an answer by the end of this week,” which squares with what Oliveira himself had said post-race in Austria.

As such, an announcement on the second GasGas ride is likely to be made at Misano when next weekend’s (September2-4) San Marino Grand Prix takes place.

Already locked in are Brad Binder and Miller at Red Bull KTM, with one of that team’s former riders, Espargaro, returning to the family at GasGas after two years with Repsol Honda.