SVG cruises to victory in Race 25 at Sandown

SVG cruises to victory in Race 25 at Sandown 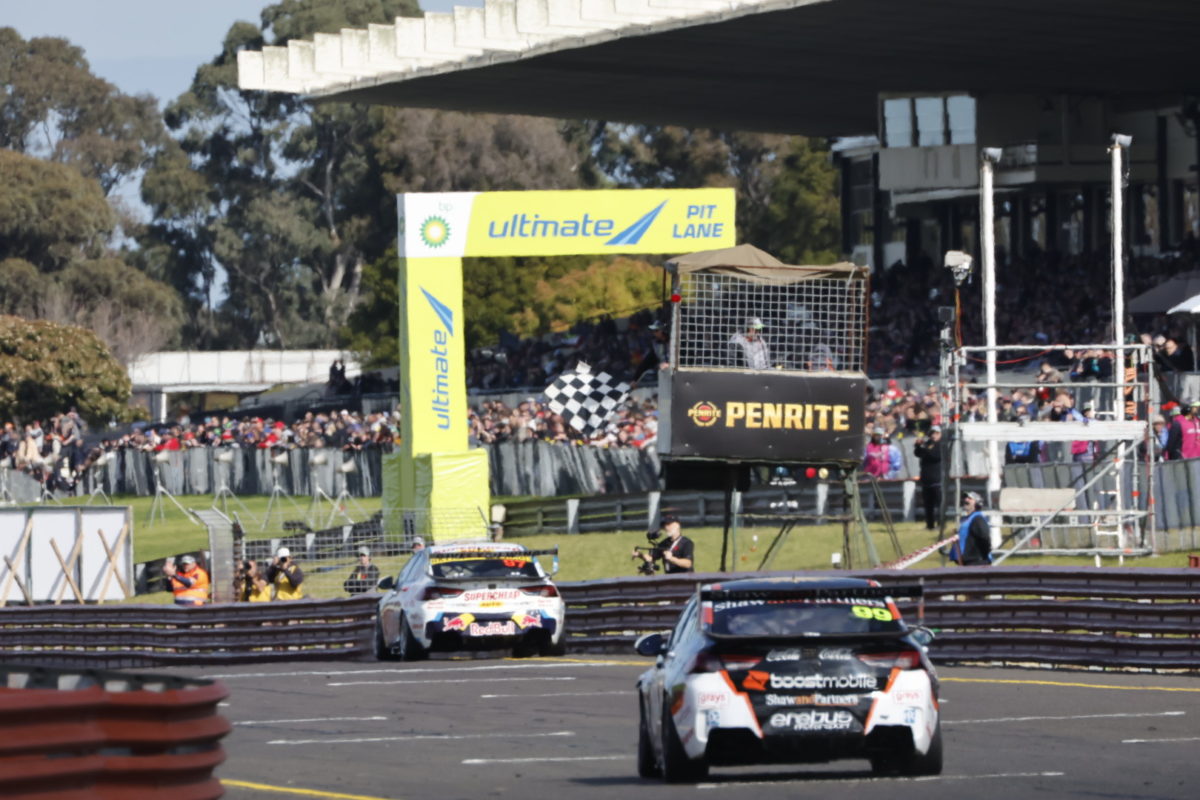 Shane van Gisbergen has cruised to victory in Race 25 of the Supercars Championship at Sandown.

The Red Bull Ampol Racing driver headed the field throughout, the pit cycle excused, to win over Chaz Mostert by more than seven seconds.

Will Brown completed the podium, demoting David Reynolds from the spot in the latter laps.

A good jump from van Gisbergen saw him lead the field as Cameron Waters was elbowed aside by Mostert at the first turn.

In the pack, Jack Le Brocq left the road at Turn 1, rejoining at Turn 3 but with contact, the Truck Assist entry limping back to the pits with a broken left-front.

Waters was shuffled back to fourth in the opening exchange, Broc Feeney also finding a way through.

At the end of the opening lap, Todd Hazelwood was also in the lane with similar battle scars to his team-mate.

Out front, van Gisbergen was not having it all his own way, with Mostert locked on to the rear bumper of the Red Bull Ampol Racing driver.

Waters slipped further back at the start of Lap 5, pushed wide at the opening corner as he slipped to seventh behind the fast-starting Will Davison.

James Golding stopped from 10th on Lap 6, Thomas Randle in for Tickford on the same lap.

Stopping early had proved a successful play in Saturday’s race, leaving those who did so in clean air.

De Pasquale was in on Lap 8, re-joining in 20th, ahead of Golding and Randle.

It was the turn of Mark Winterbottom next time through, tagged by Brodie Kostecki who followed him into the lane as they slowed for the speed limit line.

Tucked up behind Brown, Davison pitted at the end of the Lap 11, DJR looking to drop its driver out in free air and undercut those ahead.

Grove Racing responded with Reynolds next time around, feeding him back out clear of Davison as a result.

It was Mostert and Feeney, second and third, taking to the lane on Lap 14, Feeney’s exit delayed by more than 10 seconds after stalling.

Brown was next in, pitting after 16 laps, slotting out between Davison and Scott Pye.

However, the DJR driver was handed a drive-through penalty soon after, a mechanic having still been fitting his right-rear wheel as the car dropped in his Lap 11 stop. It saw him relegated to 22nd.

After 20 laps, Mostert was the leading runner to have served his compulsory stop, sitting seventh and turning laps only on par with van Gisbergen ahead.

The race leader pitted at the end of Lap 20, as did Waters and Andre Heimgartner to leave Tim Slade, Nick Percat, and Bryce Fullwood as the only runners yet to pit.

Heimgartner jumped Waters in the lane, the Monster Energy driver also picked off by De Pasquale and Golding as he rejoined.

Waters reclaimed the spot off Golding on the drag out of Turn 4, completing the move before Turn 6 at the top of the hill.

Once the pit cycle was complete, van Gisbergen led from Mostert, with Reynolds third ahead of Brown, Pye, Winterbottom, De Pasquale, Heimgartner, Waters, and Golding in the 10.

At the start of Lap 25, Heimgartner found a way through on the Dick Johnson Racing entry to take seventh.

De Pasquale slipped behind Waters at the start of Lap 31, the move being completed at Turn 1 after being set up at the final complex the better part of half a lap earlier.

With three laps remaining, Brown snatched third from Reynolds, criss-crossing the Bathurst 1000 winner to take the place by the time they reached Turn 1.

Brown completed the podium, his first top three finish of the season, with Reynolds holding on to fourth.

Davison, who’d looked in with a shot at the podium shortly after his stop, recovered to 15th after the team’s error in the pit lane.

The Penrite Oil SuperSprint at Sandown concludes with Race 26, scheduled to commence at 16:20 AEST.