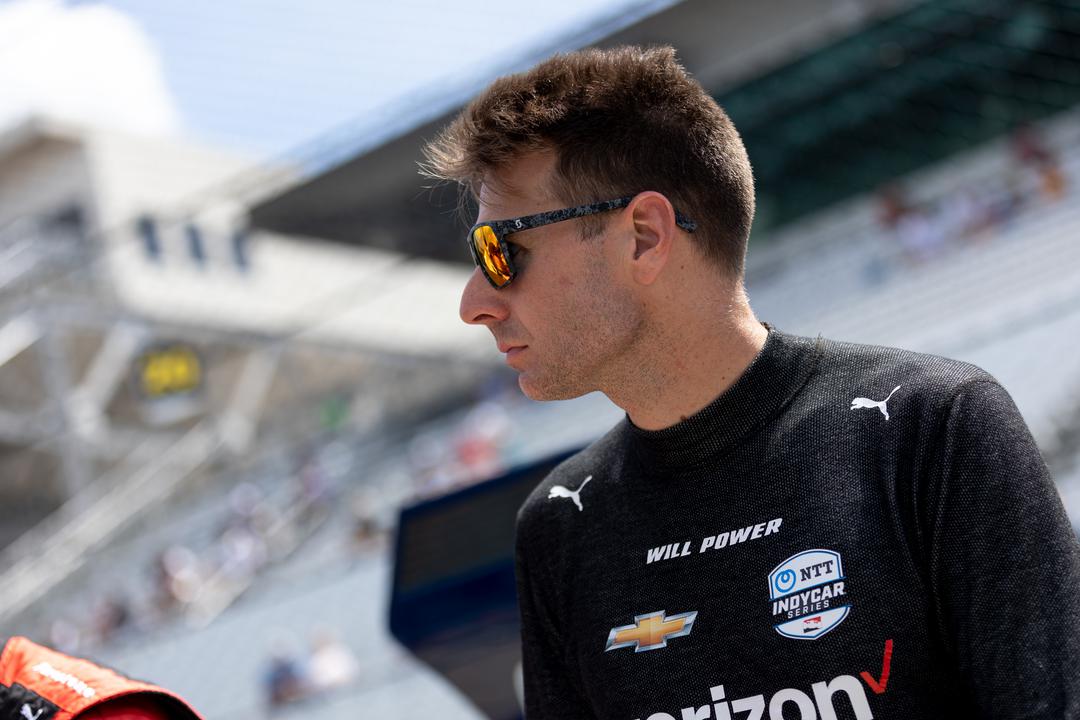 Will Power has joined Mario Andretti as the equal most prolific pole-sitter in North American open-wheeler history with the 67th of his IndyCar career, at Gateway Motorsports Park.

In a big end to Qualifying at the third-last event of the season, Power extended his series lead by one point by setting a two-lap average of 182.727mph (294.071km/h).

The Team Penske driver will share the front row with Chip Ganassi Racing’s Marcus Ericsson, while Row 2 is comprised of Josef Newgarden in third and Scott McLaughlin in fourth in the other two Penske Chevrolets.

Ganassi’s other two title contenders lock out the third row, with Alex Palou fifth and Scott Dixon sixth in their Honda-powered machines, while Pato O’Ward is set to start seventh.

The latter’s McLaren SP team-mate Felix Rosenqvist, however, is rear of grid after crashing the #7 Chevrolet.

Like in Event 2 of the season at Texas Motor Speedway, qualifying was determined on the basis of average speed over a two-lap run for each driver, who went out in reverse entrant points order.

Devlin DeFrancesco was third out and put a significant gap between himself and those who had gone before him when he set a run average of 179.531mph (288.927km/h).

It took another five cars for the rookie to be knocked off provisional pole position, two-time Indianapolis 500 winner Takuma Sato (Dale Coyne Racing w/ Rick Ware Racing) setting the first 180-plus lap and going on to achieve an average of 180.048mph (289.759km/h).

However, the Frenchman has incurred a nine-position grid penalty for an unapproved engine change this weekend, meaning DeFrancesco was still provisionally on the front row as it stood.

That remained the case despite the best efforts of yet another Andretti driver, namely Colton Herta (Andretti Autosport w/Curb-Agajanian), when he was 17th onto the circuit.

Next up was Rosenqvist, who did lose his McLaren SP entry completely as he exited Turn 2 on his opening hot lap.

Fortunately for the Swede, the impact which he would make with the infield barriers was very light in relative terms, but the incident meant he had no lap time and hence is set to start last in the 26-car field.

Once the recovery crew removed Car #7 from the circuit, Andretti Autosport’s Alexander Rossi was released and he took up fourth position with a 179.420mph (288.749km/h) average, making for an all-Honda top eight.

The Mexican had little time to enjoy bragging rights, however.

Last-start winner Dixon could not match the four who had gone before him, achieving a run of 180.954mph (291.217km/h), and then it was left to Power, who had set the pace earlier in Practice 1.

As such, the top 10 in qualifying is Power, Ericsson, Newgarden, McLaughlin, Palou, Dixon, O’Ward, Sato, Grosjean, and DeFrancesco.

However, Grosjean’s grid penalty sees DeFrancesco promoted to ninth for the start, with Rossi to join his team-mate on Row 5 of the grid.