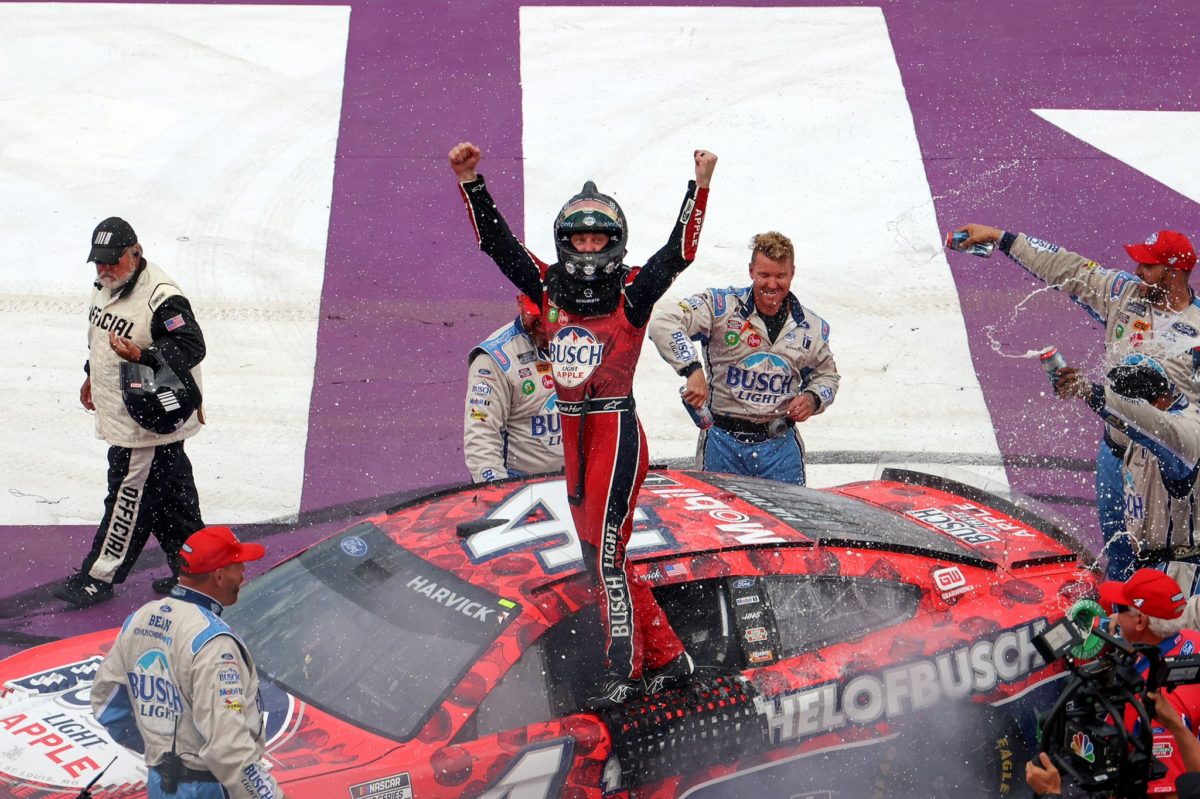 Kevin Harvick has shaken up the Playoffs with a win in the NASCAR Cup Series race at Michigan International Speedway in a race of attrition.

Bubba Wallace earned his first career pole, and Ty Gibbs once again replaced Kurt Busch, who is still recovering from his crash at Pocono.

After a lengthy rain delay, Wallace led the first 20 laps of the race before the Competition Caution came out to let crews adjust their cars in the changing conditions.

On the restart, JJ Yeley lost the nose of his car in Turn 1 and stacked up the field, causing the ‘big one’.

Nine drivers were collected in the crash, including Kyle Busch, who continued his string of eight finishes outside the top 10.

Austin Cindric was the hardest hitter in the crash, going head-on into the outside wall.

“I don’t know what started it all,” Cindric said after being released from the infield care centre.

“All I saw was the #15 car sideways and just everything stacked up, got tagged in the left rear, went up the race track and head on into the fence.

“Obviously a pretty massive hit into the wall head-on, just feels like such a waste to do all this and run a couple of laps and finish last”

Stage 2 saw close racing, with Denny Hamlin and Ross Chastain battling for the lead once again, but when Chastain came in for his green flag pit stop, he had an uncontrolled tyre which resulted in a penalty.

Custer was able to exit the car safely on pit road amid the flames.

During a top five run, Tyler Reddick noticed his car blowing up, which he eventually took to the garage area to investigate.

Noah Gragson also saw trouble, hitting the outside wall on the back straight which would end his day.

In a late restart, Hamlin was able to win Stage 2 in his third stage win of the season.

There was a six-way battle for the lead heating up for the end of the race, including Chastain, Wallace, Hamlin, Bell, Daniel Suarez and Kevin Harvick.

It all came undone when Bell put a bad block on Chastain coming out of Turn 4, sending Bell’s #20 Toyota into the wall.

Chastain would get trapped a lap down as he came to pit road under green flag conditions.

Hamlin’s race also came undone as he was penalised for too many men over the pit wall.

With 30 laps remaining, Harvick got out front, trying to break his 65-race winless streak.

Hamlin quickly made his way into the top 10 after restarting towards the back of the field.

Harvick was able to take the chequered flag for his sixth win at Michigan, locking himself into the Playoffs.

“Just good timing for sure, we’ve had several good runs in the last few weeks in Loudon and Pocono, but not everything worked out,” Harvick said.

“Just really proud of everybody on our Busch Light Ford Mustang, we’ve been digging around all year long trying to make these Mustangs faster.

“They haven’t been great this year but our guys have done a good job in trying to take what we have and maximise it and do the things we need to do.

“I’m just proud of everyone at Stewart-Haas Racing.

“Everybody who doubted us didn’t know us, they know we thrive in these types of situations, and things went our way today.

“We got control of the race, the thing I struggled most with was traffic and restarts, but once I got clear track that baby was hunting.”

The win would take Martin Truex Jnr, who is fourth place in the regular season standings, out of the Playoffs, behind Ryan Blaney.

Wallace finished in 2nd, in front of Hamlin, Logano, and Blaney.

An emotional Wallace was disappointed with his second place finish.

“All in all, an incredible weekend, I appreciate my team,” Wallace said.

“I’ll wear this one on my arm for a little while.

NASCAR will return next weekend at Richmond Raceway, with just three races remaining in the regular season.