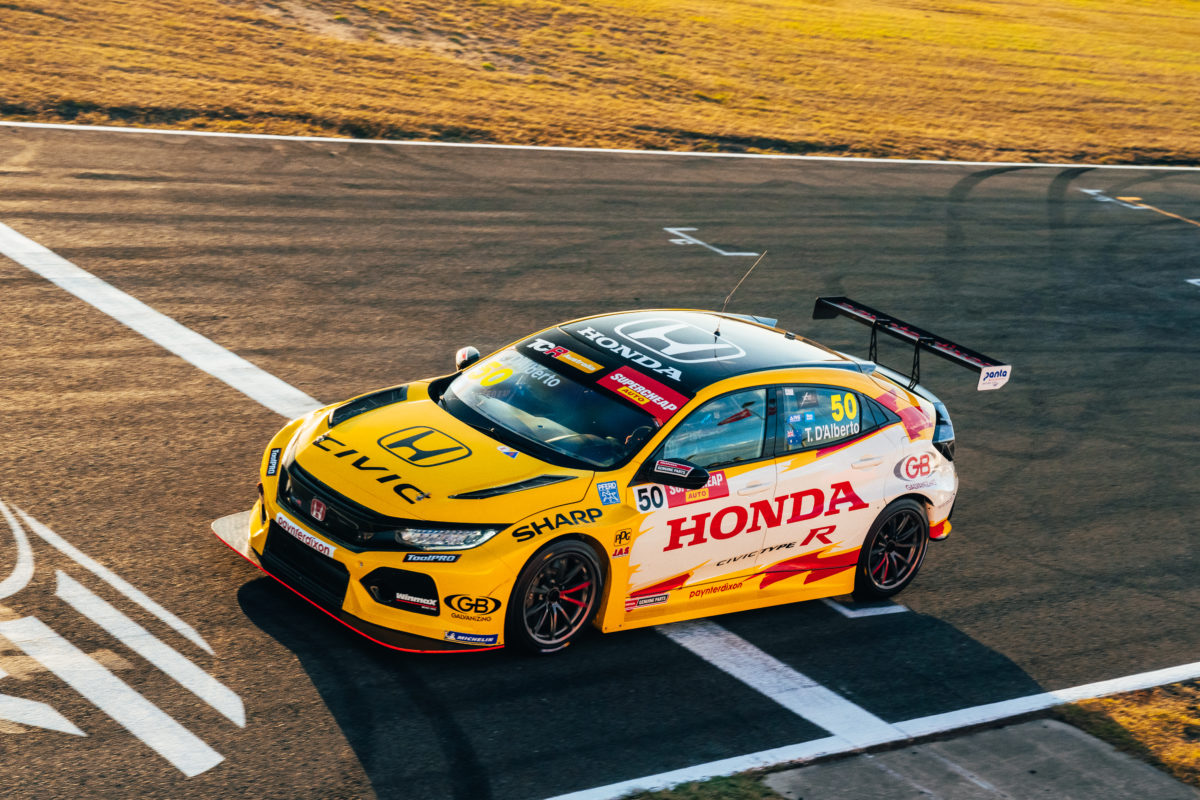 Tony D’Alberto has won Race 3 of Round 5 of the Supercheap Auto TCR Australia Series in lights-to-flag fashion at Queensland Raceway.

Zac Soutar closed in on the Wall Racing Honda Civic Type R in the final laps but did not shape as a serious threat to the series leader, who had only just taken a career-first TCR race win on the afternoon prior.

The two Hondas were separated by 0.3989s when the chequered flag flew on Race 3 after 21 laps, with Jay Hanson taking third in one Audi RS 3 LMS and Melbourne Performance Centre team-mate Will Brown fourth in another, despite a five-second time penalty.

In the series, D’Alberto is now out to a 58-point lead over Jordan Cox, and another two over Hanson, with two rounds to go in the 2022 campaign.

Hanson started from the inside of the front row by virtue of cumulative round points but D’Alberto got the jump from the other side and took a clear lead to the first corner.

Soutar and Luke King (Hyundai) made contact as they vied over third, enabling Cox (Peugeot) and Brown to get involved in the battle.

Brown went super-deep when they arrived at Turn 3, leaning on King’s #2 i30 N and taking both wide before they emerged fifth and sixth respectively, behind Soutar in third and Cox in fourth.

Brown passed Cox for fourth on Lap 2, before the latter was involved in a vigorous battle with King, HMO Hyundai drivers Bailey Sweeny and Josh Buchan, and Honda privateer Michael Clemente.

After plenty of bump and grind, Cox at least held onto fifth while King would slip back a handful of spots.

Meanwhile, D’Alberto had seen off pressure from Hanson and led by a full second when Soutar passed the #9 Audi for second position as they negotiated Turn 1 at the start of Lap 13.

Brown was still holding fourth but, with a time penalty assessed to #999 for the Lap 1 incident with King, it looked like being a close-run thing as to whether or not he would finish there.

The 2019 Supercheap Auto TCR Australia Series winner’s cause was helped when Cox came under pressure from Sweeny, who eventually squeezed past the #33 Peugeot and into fifth position through Turns 4 and 5 on Lap 15.

Released from behind Hanson, Soutar started to chip away at the margin which D’Alberto enjoyed, bringing it down to barely more than half a second with two laps to go.

After Lachlan Mineeff beached his Audi on the exit of Turn 2, officials opted to cover the car with a local yellow, but Soutar could not fashion a pass on the #50 Civic Type R in the time which remained.

Behind the Hondas by a further 1.7940s was Hanson, while Brown officially held onto fourth spot given he beat Sweeny to the line by over seven seconds.

Michael Caruso, whose Alfa Romeo failed while leading Race 2, did not take the start despite Ashley Seward Motorsport’s attempt to turn the car around in time for the weekend finale.

Round 6 of the Supercheap Auto TCR Australia Series takes place at the Shannons Motorsport Australia Championships’ Sandown event on September 16-18.

Stan Sport will stream the event live and ad-free.