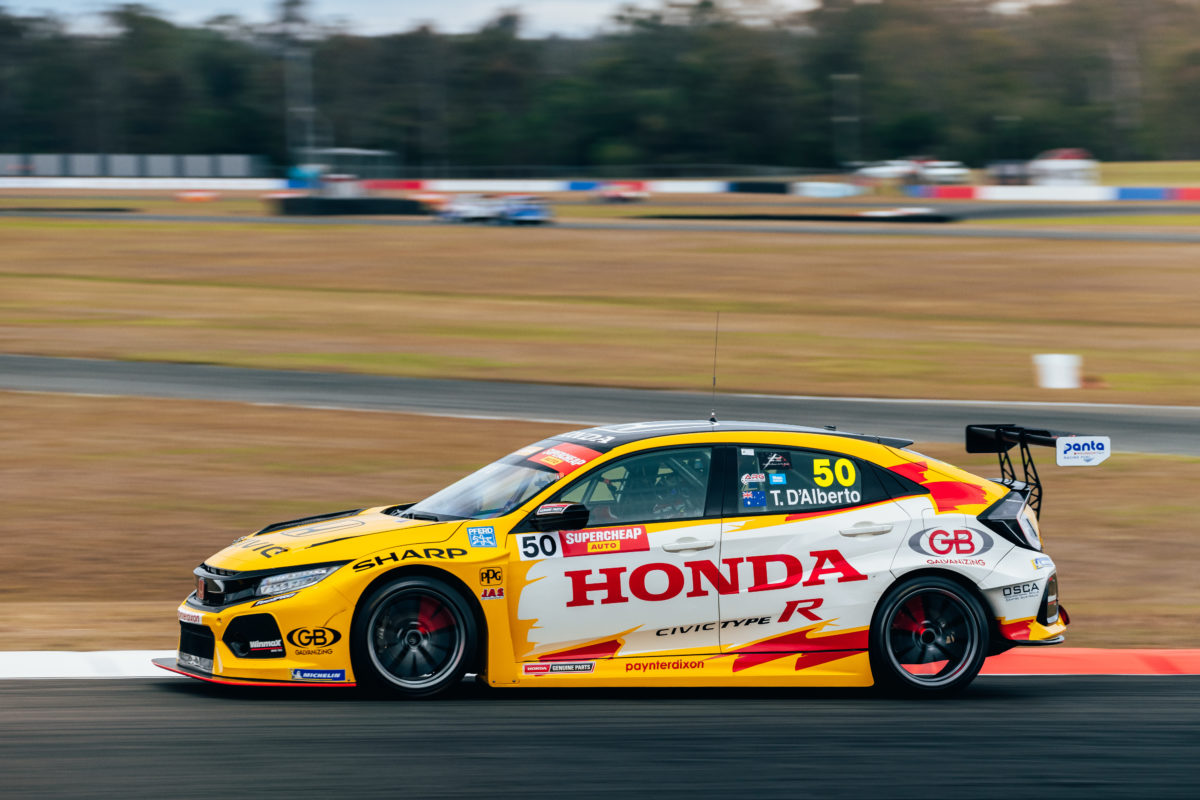 Tony D’Alberto has extended his Supercheap Auto TCR Australia Series lead with a first-time victory, in Race 1 of Round 5 at Queensland Raceway.

D’Alberto has contested almost every round of Supercheap Auto TCR Australia in its short history but had not taken victory until now, a result which gives him a 50-point margin in the standings.

The original start was aborted after Kody Garland parked his Renault just over the edge of Dick Johnson Straight, outside of the 13th grid box that he was supposed to pull up in, due to power steering and clutch problems.

After an extra formation lap, the contest was finally underway with D’Alberto leading fellow front row starter Soutar and the rest of the field to the first corner.

Bailey Sweeny (Hyundai) speared into the infield from an early battle for fourth position after contact from Hanson (Audi) and possibly also Aaron Cameron (Peugeot) through Turn 1.

Two corners later, Will Brown (Audi) threw away third position with a lock-up and off at Turn 3, meaning MPC team-mate Hanson inherited the place, albeit more than two seconds back from Soutar.

Hanson was catching Soutar, while D’Alberto had just stretched his lead beyond a full second in the #50 Civic Type R, when a Safety Car was called on Lap 7 due to carnage at Turn 6.

Ben Bargwanna (Peugeot) was in a battle for sixth with the three HMO Customer Racing Hyundais when he had contact with Nathan Morcom through Turn 5.

That hit caused some sort of failure because, when they arrived at the end of the short chute, Bargwanna understeered into a second, larger collision with Morcom which caused both to be trapped in the gravel and also forced Josh Buchan wide in a sister i30 N.

Sweeny thus inherited sixth in the other HMO entry, behind a top five of D’Alberto, Soutar, Hanson, Cameron, and Luke King (Hyundai), while Brown had got back to 11th and series contender Dylan O’Keeffe (Peugeot) was 12th.

The restart came on Lap 13, at which point Hanson came under pressure from Cameron.

When Buchan went down the inside of Lachlan Mineeff (Audi) on Lap 14 at Turn 6, he took the pair of them wide and Brown snatched two positions in one fell swoop.

D’Alberto eased to a 0.9196s win after a time-certain 18 laps out of a scheduled 20 following the extra formation lap, from Soutar, Hanson, and Cameron.

Sweeny salvaged fifth, from King and Jordan Cox (Peugeot), who moved up to second in the series standings despite starting 16th.

Bargwanna, Morcom, and James Moffat were DNFs, the latter due to a turbo boost problem in his GRM Renault.

Race 2 at the Queensland round of the Shannons Motorsport Australia Championships will be held tomorrow from 12:10 local time/AEST.