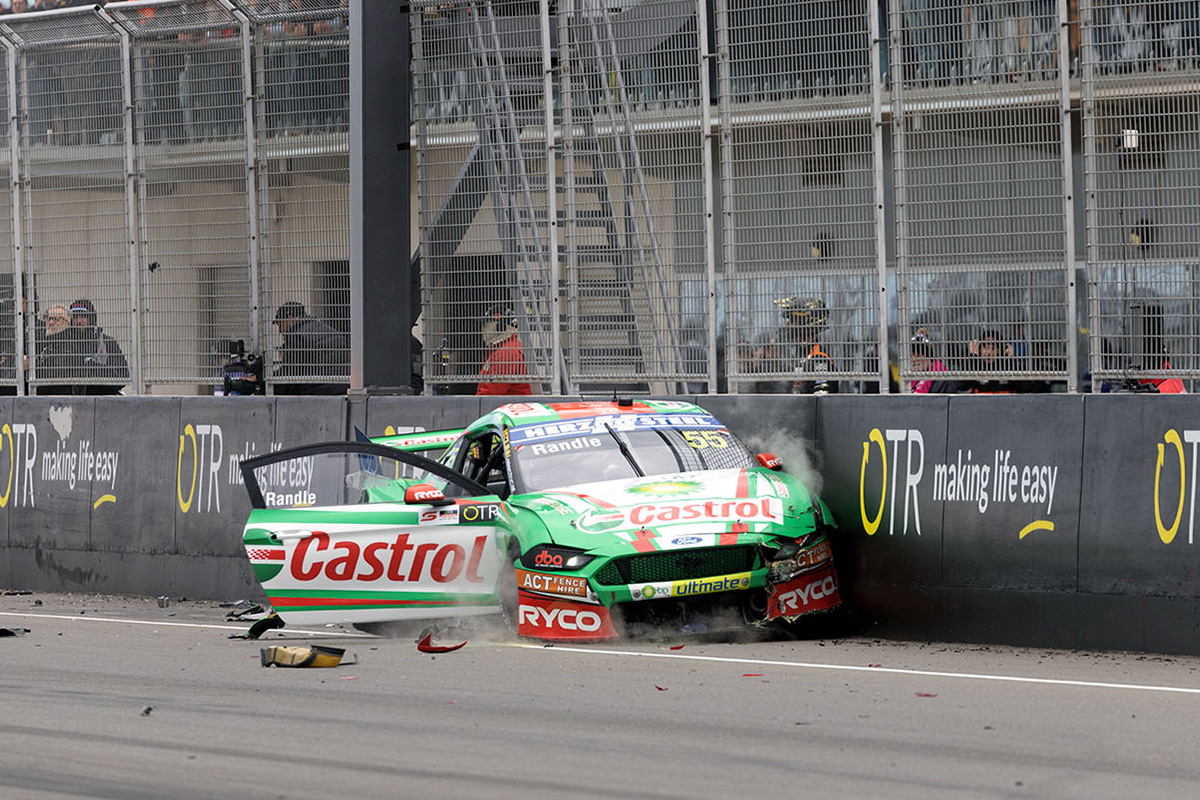 Thomas Randle is keen to get back behind the wheel at the next Supercars round following his monster startline crash at The Bend Motorsport Park.

The #55 Castrol Racing driver stalled on the front row of the grid in Sunday’s Race 22 of the OTR SuperSprint and was collected by Andre Heimgartner.

Both drivers were taken to hospital for checks before being cleared to leave later that night, but concerns remained over Randle’s heel.

He visited the hospital again the next day for further scans, to which there were promising signs, aside from bruising.

Randle confirmed to Speedcafe.com that he will be able to race again at the Penrite Oil Sandown SuperSprint (August 19-21).

The 26-year-old will revert to the Tickford Racing Mustang of Tailem Bend wildcard entrant Zak Best.

Randle said the crashed #55 is likely to be repaired, with the area of the chassis from the rear roll-hoop back all that needs to be ‘redone’.

“You want to get back in the car,” he told Speedcafe.com.

“Obviously not that car because it’s sustained quite a big impact, but the boys are pretty certain they will repair that chassis.

“I don’t know if I will run it again this year, probably not, but they’re pretty certain they’ll be able to repair it.”

The crash was a jarring turn of events for Randle, who had posted the best qualifying result of his career with a second-place grid slot for the race in which the incident occurred.

A few days on, the Repco Supercars Championship rookie is still feeling the effects of the crash.

“It was a big hit, I’m glad Andre and I could both walk away from it,” said Randle.

“It was more just the bottom of my foot, like my Achilles of my left foot,” he added of the bruising.

“I watched the onboard and when I got hit, both my knees went up into the steering wheel and then my feet just decided to have their own little party I guess.

“I think they sort of just slammed back on the floor; I was a little bit winded and probably not to be extent of Andre because mine was a rear impact.

“The belts did their jobs, [the] seat, all the driver protection we wear but it was still quite an impact.

“My leg and my knees are a bit bruised from whacking the steering wheel up and my arm sort of grabbed the back of the seat, my right arm.

“That was probably the extent of it but nothing major which I’m very thankful for and just got a couple of precautionary scans done on my foot just to make sure nothing was internally damaged.”

Randle made special mention of those who were on the scene to help him in the aftermath of the crash.

“It’s been what, 11 years since the last big startline crash like that; I mean, it’s a testament to the cars,” he commented.

“I got to thank the whole medical crew, Dr. Carl Le, all the volunteers, marshals, pit lane officials, the [fire marshals].

“Obviously all my friends and family; the support that Andre and I have both had, it’s been pretty emphatic.”