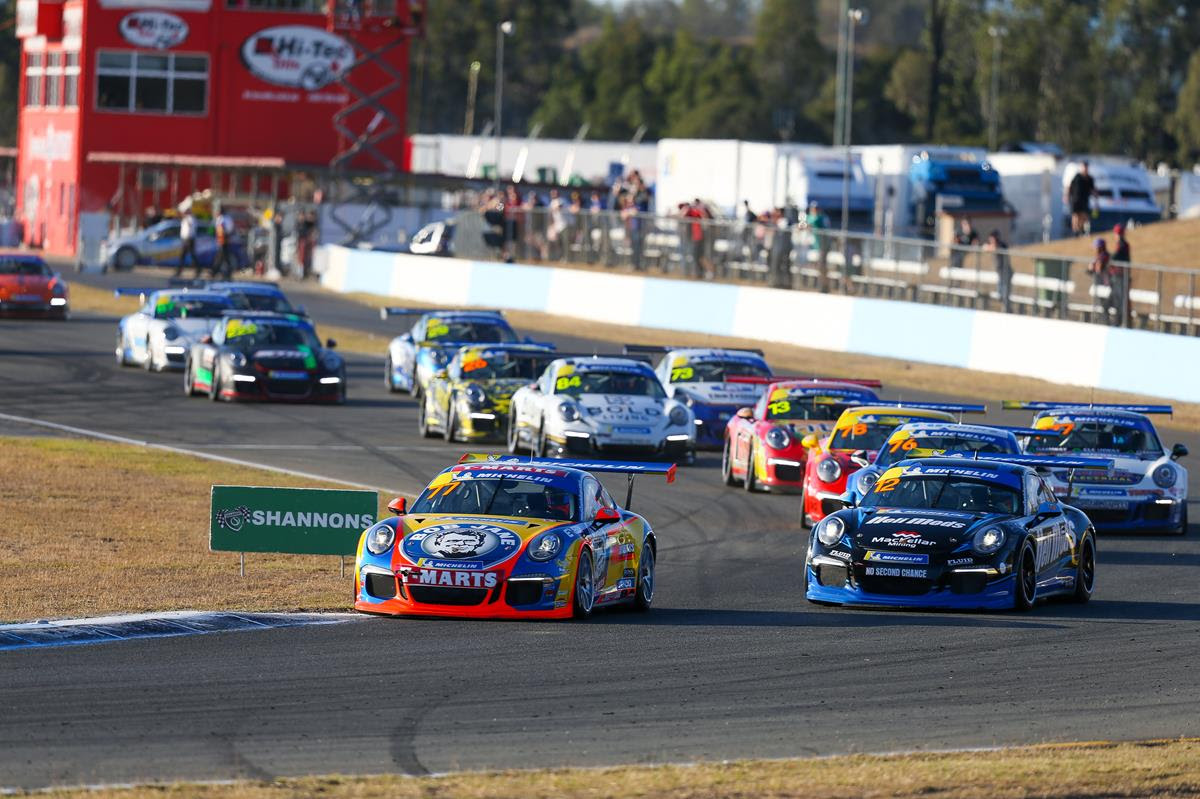 The Porsche Michelin Sprint Challenge will race at Queensland Raceway this weekend.

Queensland Raceway is set to host its largest ever Porsche Michelin Sprint Challenge field, with 27 cars to take to the track this weekend.

The mammoth entry list is due to the large field of debutants that featured in the opening round of the series in Sydney.

As part of that list of starters were six drivers in the Pro class, two in Morris Pro-Am and three in Class B including: Thomas Sargent, Lachlan Bloxsom, Ryan Wood, Jason Miller, Harrison Goodman, Aron Shields (All pro), Christian Fitzgerald, Emanuel Mezzasalma (Morris Pro-Am), as well as Jacob Li, Nathan Sticklen, and Gerard Murphy in Class B.

Added to that list in Queensland Raceway for Round 2 will be Pro-Am Eric Constatinis in 991 Gen II car as well as Tom McLennan, experienced production car racer Brad Carr, and Lachlan Harburg, who will all run previous-gen 991.1 cars in Class B.

Apart from the series’ inaugural year, 15 debutants in a single season is the most in series history.

Sprint Challenge last raced at Queensland Raceway in 2019, with the eventual series winner, Harri Jones, claiming the round by virtue of a second and two race victories across the weekend.

The opening round of the 2022 series in Sydney in May saw youngsters Ryan Wood and Thomas Sargent going head-to-head across the three races.

Wood leads the Pro class heading into Round 2, with Sargent just behind.

Fresh off his Round 5 victory in Porsche Paynter Dixon Carrera Cup Australia at The Bend Motorsport Park last weekend, Sam Shahin leads the Sprint Challenge Morris Pro-Am standings, while Tom Taplin leads the field in Class B heading into Round 2.

While Wood and Sargent will have the likes of Courtney Prince and Jason Miller in the hunt for podium spots in Pro, in the Morris Pro-Am class Shahin will likely come under fire from Boulton, Goldie, as well as Carrera Cup regulars Indiran Padayachee and Scott Taylor.

Following two practice sessions and a qualifying on Friday, both Saturday’s two 14 lap sprint races and Sunday’s 45-minute endurance race will be broadcast live and ad-free on Stan Sport.