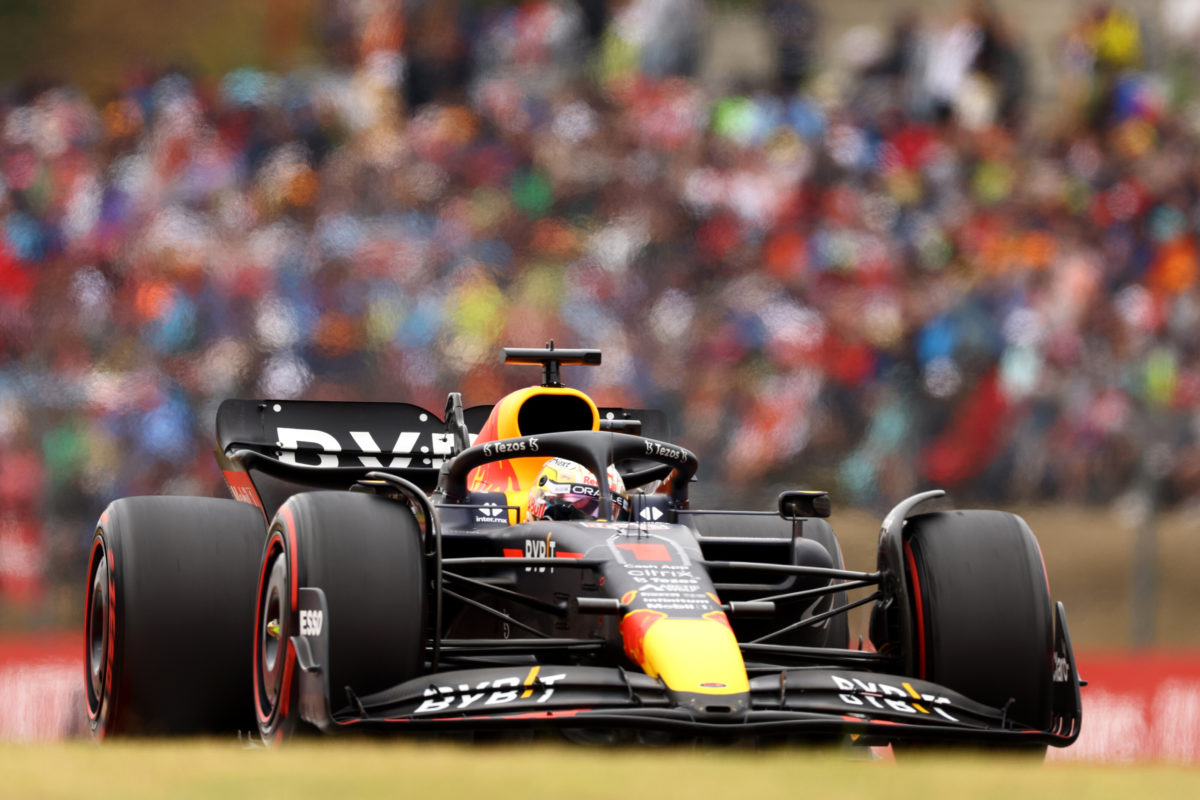 Max Verstappen has claimed a stunning victory in the Formula 1 Hungarian Grand Prix while a bizarre strategy call from Ferrari threw away a potential victory.

His cause was eased in the final third of the race when Ferrari decided to fit hard tyres to Charles Leclerc’s car, the Ferrari driver plummeting down the order and eventually trail home sixth.

Indeed, Ferrari did not feature on the podium come race end, with Lewis Hamilton second and George Russell third.

From the race start, Russell maintained his pole advantage, holding the inside line through Turn 1 to fend off Carlos Sainz.

Leclerc fell in to third while Lando Norris held off Hamilton to maintain fourth, then came the two Alpines.

Before the end of the opening lap, the Virtual Safety Car was deployed for debris at Turn 2, while Alex Albon was called into the pits via a meatball flag.

The interruption lasted a lap, Russell jumping well as racing resumed to hold a four second advantage over Sainz.

A good run out of Turn 3, Verstappen quickly put a move on Alonso on the run up the hill, making the move stick on approach to Turn 4.

Having been boxed out at the start, Ricciardo fell to 11th behind Kevin Magnussen, the Australian challenging the Haas into Turn 2 on Lap 6.

The Dane was soon moved aside after being shown the meatball flag for damage to his front wing.

Verstappen’s progress in the opening laps was swift, moving by Esteban Ocon on Lap 7, Sergio Perez putting a move on Alonso moments later.

At the start of Lap 12, Norris lost a spot to Hamilton, who dived up the inside into Turn 1.

The McLaren driver immediately dropped another spot as Verstappen found a way through exiting the corner.

It was Perez’s turn a lap later, Norris offering no defence as he slipped to seventh, struggling for pace on the soft compound tyres.

The Brit boxed at the end of Lap 14, swapping onto the medium rubber as he rejoined 16th, his stop delayed by a sticky wheel nut.

Ricciardo stopped next time around, the Australian falling to 16th behind the Williams duo of Nicholas Latifi and Albon.

Race leader Russell stopped on Lap 17, releasing the two Ferraris which had reeled him in as the opening stint progressed.

He fed out between the two Alpines, though was made to work for it by Alonso who drew alongside exiting Turn 1 and through Turn 2.

Verstappen had pitted at the same time, dropping to eighth.

Next, it was Sainz’s turn to pit, despite starting the race on a set of medium compound tyres.

The Spanish driver emerged ahead of Alonso, joining the track as Russell put a move on Ocon into Turn 1.

Leclerc remained on track, though his pace was more than half a second a lap slower than Russell and Sainz behind.

He eventually pitted at the end of Lap 21, taking on another set of medium tyres and dropping out ahead of Sainz in second place.

Ocon’s stop on Lap 24 effectively completed the opening pit cycle, the Frenchman taking a hard set of tyres as Alonso had when he’d stopped earlier.

A battle between the two Alpines opened the door for Ricciardo, who pounced on both to move from 12th to 10th at Turn 2.

It left the order as Russell from Leclerc, Sainz, Verstappen, and Hamilton.

Russell soon found himself under attack from Leclerc, the Mercedes driver having to defend at Turn 2 as the Ferrari driver looked to go the long way around on Lap 28.

The pair remained locked together, the race leader offering a strong defence as they came close at Turn 1 on Lap 30, and again on the run to Turn 4.

He was powerless a lap later, however, Leclerc putting a late move around the outside of Russell to steal the position away.

The Ferrari driver quickly skipped clear, opening a 1.8 second advantage within a lap.

Verstappen stopped for a second time at the end of Lap 38, swapping onto another set of medium tyres.

Weary of the undercut threat, Mercedes reacted with Russell to cover off the Red Bull.

Leclerc was also in the lane, swapping onto the hard tyres which, on the Alpines, had proved less than stellar.

Verstappen pulled off an undercut once Russell rejoined, the Dutchman quickly on the gearbox of Leclerc to pass the Ferrari into Turn 1 as they began Lap 41.

However, the championship leader made a mistake at the penultimate corner to drop back behind his Ferrari rival.

It afforded Russell the opportunity to pass Perez at the end of the front straight, the Mexican pitting soon after.

Verstappen quickly recovered and latched onto the rear of Leclerc once again, the Ferrari driver clearly struggling for traction on the hard rubber.

It was hardly a battle, the Red Bull performing a neat ‘over-under’ at Turn 1 on Lap 45.

Through that exchange, Sainz had remained on track, as did Hamilton, the pair running first and second the better part of a dozen seconds up the road from Verstappen.

The race leader was in on Lap 48, Ferrari bolting on a set of soft compound tyres, not the hards as the team had fitted to Leclerc, to feed him back out behind Russell in an effective fourth (once corrected for Hamilton who was yet to stop).

Having also stopped, Ricciardo emerged on hard tyres while Lance Stroll on softs immediately looked to challenge the Australian.

They came together at Turn 2, the Aston Martin pitched into a spin as the McLaren locked up and skated wide, for which he picked up a five-second penalty.

Hamilton had a set of soft tyres fitted as he stopped for the final time on Lap 52, dropping to fifth to promote Verstappen to the race lead.

Still struggling on the hard compound tyres, Leclerc lost out to Russell at Turn 1 on Lap 54.

Ferrari hauled him in for a third time at the end of the lap, fitting a set of soft tyres as he rejoined in sixth, behind both Hamilton and Perez.

As the race moved into its final stanza, Hamilton was on a charge, setting repeated fastest laps as he closed in on third-placed Sainz.

They were together on Lap 62, Hamilton enjoying more than a second a lap advantage over the Ferrari ahead.

It was a simple move as they powered down the front straight at the start of the next lap, Hamilton quickly pulling away from his Spanish rival.

Having closed quickly on Russell, the 24-year-old was in no mood to wave his team-mate through.

It mattered little as Hamilton had far more grip, the seven-time champion performing an over-under at Turn 1 at the start of Lap 65 to take second.

With three laps remaining, Valtteri Bottas rolled to a halt, the Virtual Safety Car deployed to cover the retrieval of the Alfa Romeo Sauber.

Racing resumed with a lap and a half remaining, Verstappen holding a 13.2 second advantage as it did so.

Rain began to fall in the final two laps, the race leader taking a conservative approach to take the chequered flag.

His margin of victory was seven seconds over Hamilton, Russell finishing third as Mercedes snagged another double-podium result.

Sainz saw the flag fourth ahead of Perez, then came Leclerc, the top 10 completed by Norris, Alonso, Ocon, and Sebastian Vettel.

Ricciardo crossed the line 13th, but with his penalty fell to 15th in the final results, the story of his race largely dictated by spending the opening stint behind the Alpines.

Formula 1 now heads on its summer break, with the Belgian Grand Prix next on August 26-28.