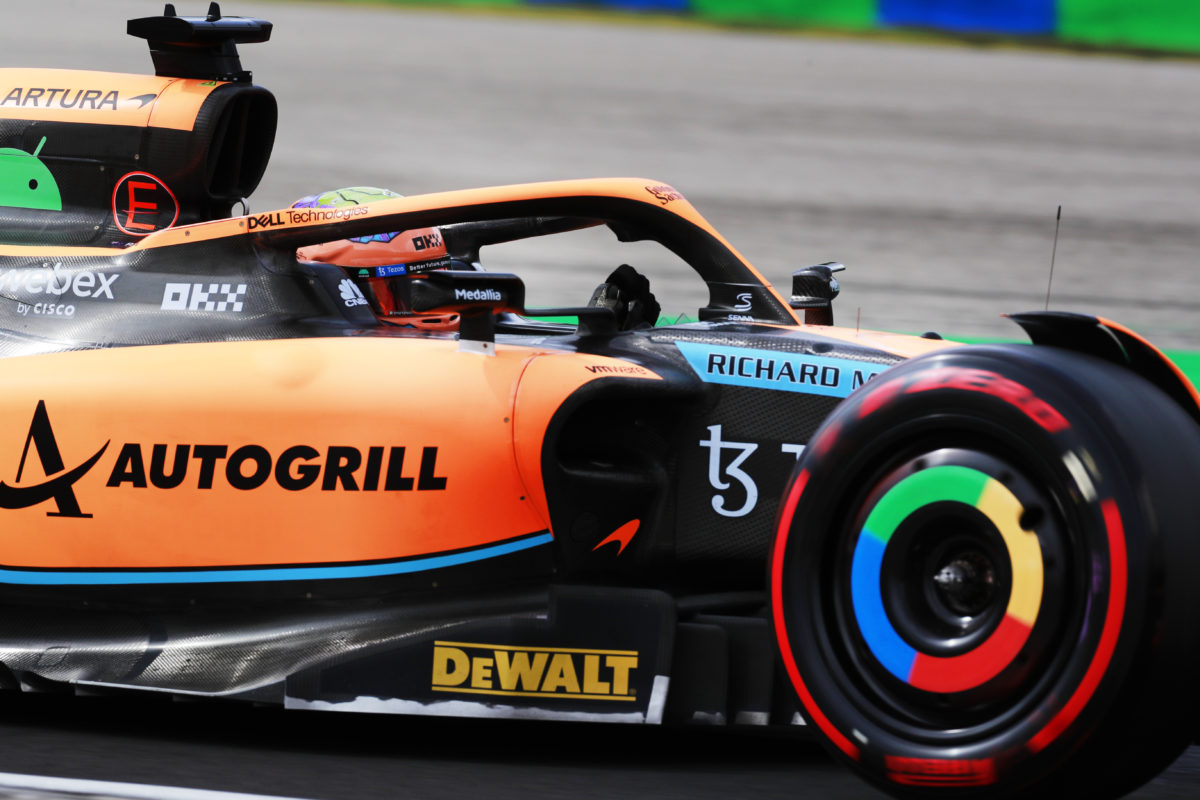 An inability to fire up the hard compound tyre late in the Formula 1 Hungarian Grand Prix compromised Daniel Ricciardo’s race.

After starting ninth, the Australian was boxed out at the opening corner and slipped to 11th, progressing to 10th when Kevin Magnussen was forced (by officials) to pit for damage on Lap 6.

Starting on a set of used soft tyres, the opening stint was spent following the Alpine on Fernando Alonso before McLaren pulled Ricciardo in on Lap 15 for a set of mediums.

From there, he was able to race his way forward and was maintaining the gap to team-mate Lando Norris ahead as the duo ran seventh and eighth before the second round of stops.

However, a move on to the softs proved disastrous.

“The hard was horrible,” Ricciardo said.

“I think the soft as well, at the start, fell away really quickly.

“So the only tyre we were able to do a little bit on was the medium in the middle of the race, but then coming out on the hard was like ice.”

Complicating matters was contact with Lance Stroll shortly after moving onto the hard tyres, Ricciardo locking up at Turn 2 as the Aston Martin looked to go around the outside of the long left-hander.

It was an incident which earned the McLaren driver a five-second penalty, dropping him from 13th to 15th at the chequered flag.

“It’s one of those, I tried obviously to do what I could not to hit him, it just locked so early,” he said of the incident with Stroll.

“Obviously apologies to him for that, but we were just slow.

“And then you get blue flags and you just never get temperature as well on the tyre.”

By contrast, Norris was able to get the hard tyre switched on to some degree, coming home seventh.

“It was difficult to predict exactly what the different tyre specs will do today, in today’s race, because the conditions were so much different compared to what we’ve seen on Friday,” said team boss Andreas Seidl.

“So there were a lot of unknowns, and if you look at our strategy, that we took starting on the softs, this was definitely the right strategy because it opened up different opportunities for us for the race.

“But we then saw, because we had to switch to two stops because the soft tyres were degrading quite a lot after, I don’t know, 10, 12 laps, so then putting the hard tyres on was a bit of a question mark.

“But if you look at Lando’s stint on the hard tyres, it actually took him only I guess one lap and the tyres were in, and he did a great stint.

“I guess for us it’s more important to understand why Daniel was not able to do the same.”

Seventh for Norris netted McLaren six points in Hungary, the same as Alpine managed across its two cars.

Four points therefore continue to split the two teams, as it had done entering the weekend.

Formula 1 is next in action at the Belgian Grand Prix, from August 26-28.