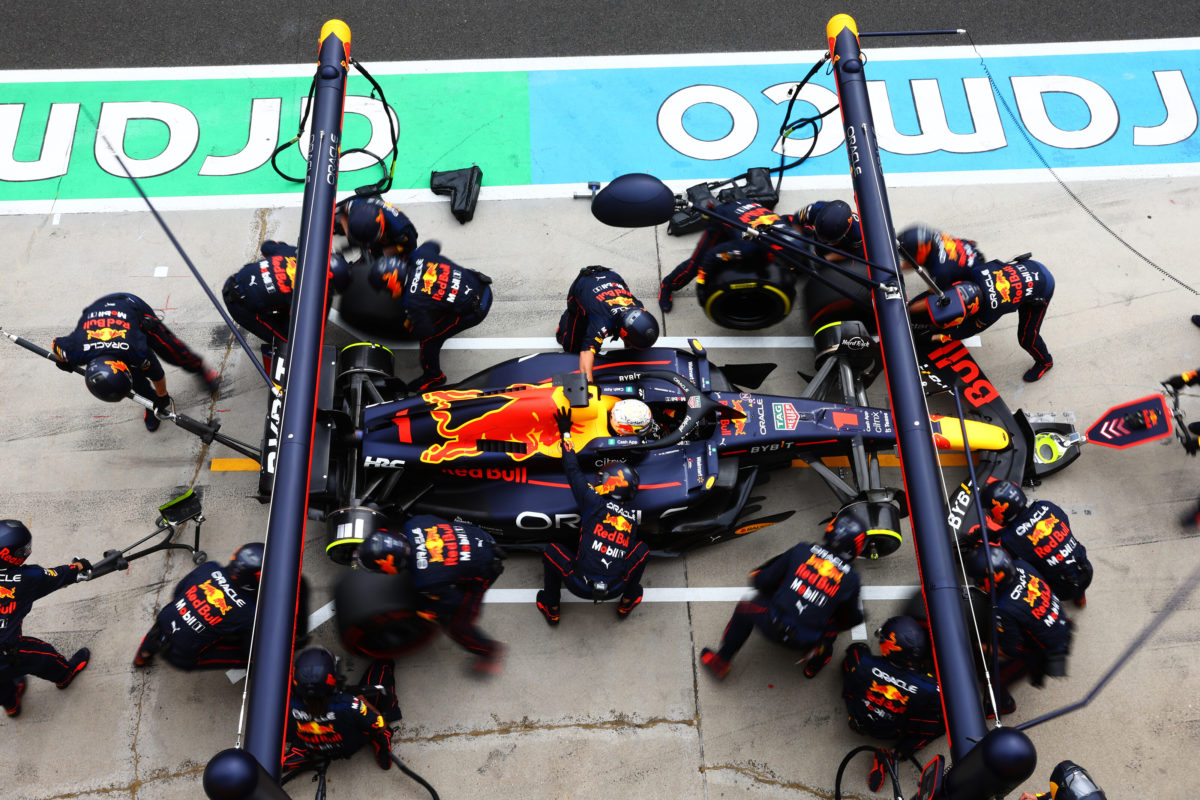 A reactive and well executed strategy were key to Max Verstappen’s success in the Formula 1 Hungarian Grand Prix.

The Dutchman rose from 10th on the grid to steal the unlikely win in cool conditions, heading Lewis Hamilton and George Russell.

Verstappen’s performance came as Ferrari struggled, decisions from the Scuderia pit wall serving only to hamper Charles Leclerc’s hopes of clawing back ground in the drivers’ championship.

The Ferrari driver ultimately fell to sixth after he was forced to stop a third time for tyres following a disastrous stint on the hard compound rubber.

Leclerc now sits 80 points down in the championship with nine races remaining.

“I think nobody really expected this,” Verstappen said of his victory.

“We said to each other, we have to remain calm before the race and I think we did that.

“We made all the right calls in the race – was a bit hectic for me in the first lap, getting a bit boxed in and staying out of trouble, but after that, we had a few overtakes.

“We pitted at the right time, put the right tyres on the car, I think that was most important today, to have the grip.”

Verstappen was forced to race his way to the front after a power unit issue in qualifying meant he could do no better than 10th.

Sporting a new unit for the race, allowed without penalty under the regulations, he twice passed Leclerc en route to victory – spinning soon after passing him the first time only to chase him down and pass the Ferrari again.

“I could see that Charles was still struggling on those hard tyres, so I just tried to close up again and go for it again,” Verstappen said of his pirouette.

Cooler conditions made it difficult for drivers to get temperature into the tyres, that being a key factor in Leclerc’s woes on the hard rubber.

Verstappen revealed the initial strategy at Red Bull was to start on the white-walled compound, only for that to be discarded in the minutes before the race.

Starting on the softs instead, the team employed a two-stop strategy, pitting Verstappen for the first time on Lap 16 for a set of medium compound tyres.

Running fifth, he fell to eighth before rising to fourth when he stopped again on Lap 38, again for a set of mediums, extending that tyreset to the end of the 70-lap race.

“We were planning to start on the hard tyre and then I went to the grid on the soft tyres and I was already struggling for grip,” he explained.

“I was like no way we’re going to start on the hard.

“It’s also credit to the team because we of course plan the strategy around that, with the hard tyre, and then we were like ‘okay, we’re switching it to a soft’.

“We had a lot of confidence in just changing it around, and that’s what we did.

“I’m very happy that we did because the hard tyre was really, really tough.”

The result was Verstappen’s eighth win of the season and leaves him in a commanding position in the world championship, which is beginning to become a question of when he seals it rather than if.

“It’s of course a great lead, but we cannot have too many days like we had yesterday,” he said, referencing his 10th place grid spot and power unit issues.

“And even today, we had a few little issues with the clutch and the upshifts, which was not great to drive.

“Overall, of course it’s good, but we just keep working, keep on trying to improve things.”

Formula 1 now heads off on summer break, returning for the Belgian Grand Prix at the end of August.