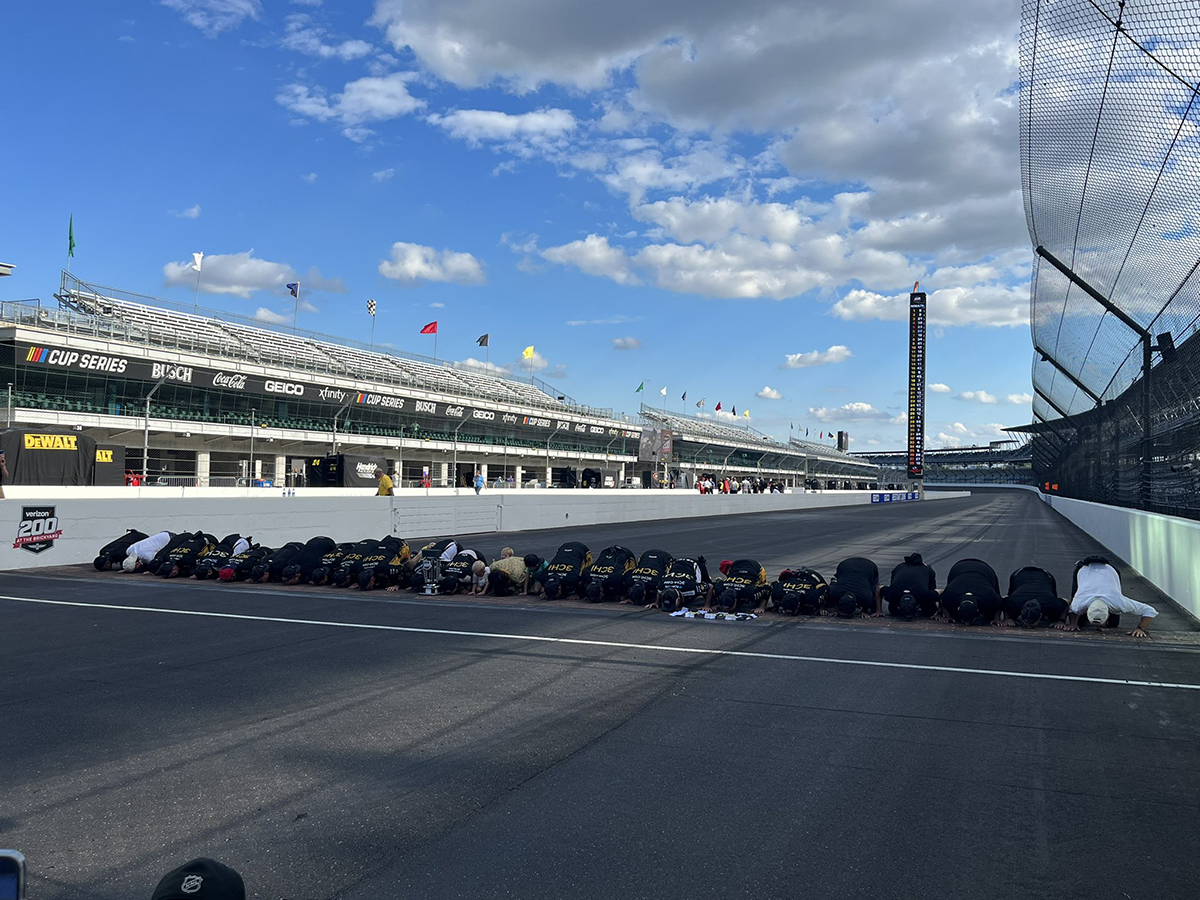 Tyler Reddick has taken his second career victory in an eventful race at the Indianapolis Road Course.

Almirola failed to finish the race, and will need to win a race to get into the playoffs in the remaining four regular season events of the year.

After making his Cup Series debut, Daniil Kvyat suffered from mechanical difficulties, putting him out of the race early.

Back on track, there were multiple lead exchanges between Briscoe, Reddick, Christopher Bell, and Ryan Blaney, with Bell prevailing to win Stage 2.

Restarts were a hot spot for drivers with Kevin Harvick and Hamlin making contact, and others going five and six wide heading into Turn 1.

After a long green-flag run, Larson suffered from a suspected brake failure, slamming into Ty Dillon at the end of the front-straight at close to full speed.

The 2021 NASCAR champion exited his car and ran over to the heavily damaged #42 machine to check on Dillon, both drivers were okay after the accident.

“Yeah, all I saw was a blue flash and that’s about the hardest I’ve been hit by anything,” Dillon said.

“So first I’m just grateful to God that I’m okay and these cars are safe and can take a shot like that.

“We were having a good run and just blindsided, really.

“I’m all good, it’s been a tough year but we’re never gonna quit.”

Larson refused to take an interview after being released from the infield care-centre, and explained he wanted to go straight to his crew to identify what went wrong on his #5 car, being unsure of what happened, but suspecting a brake-failure.

On the restart, another playoff hopeful in Harvick had issues, making contact with Alex Bowman and others that would send him into the garage.

With under 10 laps remaining Bell’s day came undone with a flat tyre, resulting in a late-race caution for debris.

The restart sparked trouble for contender Elliott, spinning around after contact with Blaney.

At least a dozen cars made contact, with Austin Dillon bringing out the caution after getting stuck in the gravel several corners later.

On the final restart of the race, Blaney went around off the bumper of AJ Allmendinger, and several cars cut through the track after missing the first corner, including Chastain.

Chastain would go on to fight for the win, but it was Reddick who was able to pull through and take his second career victory.

“Yeah, I was like ‘uh-oh’… but it was a scenario that had been talked about, what to do when someone takes the access road,” Reddick said.

“I couldn’t believe he got ahead of me, I waited to see if he was going to get a penalty, but I didn’t want to move him out of the way and make the race worse than what it was.

“But yeah I was really surprised by that but we made it work, but hats off to Ross for trying to do that.

“Really glad it didn’t work out, because I’d be pretty pissed off.

“But we found a way to come back to victory lane, and really glad to do it here at Indianapolis, it’s a really special place to race and really excited to kiss the bricks.”

Chastain later explained he took the access road to avoid the inevitable carnage at Turn 1.

After crossing the line in second-place, he was slapped with a 30-second penalty.

NASCAR returns next week to Michigan International Speedway on Monday August 8 at 5:00 am AEST.