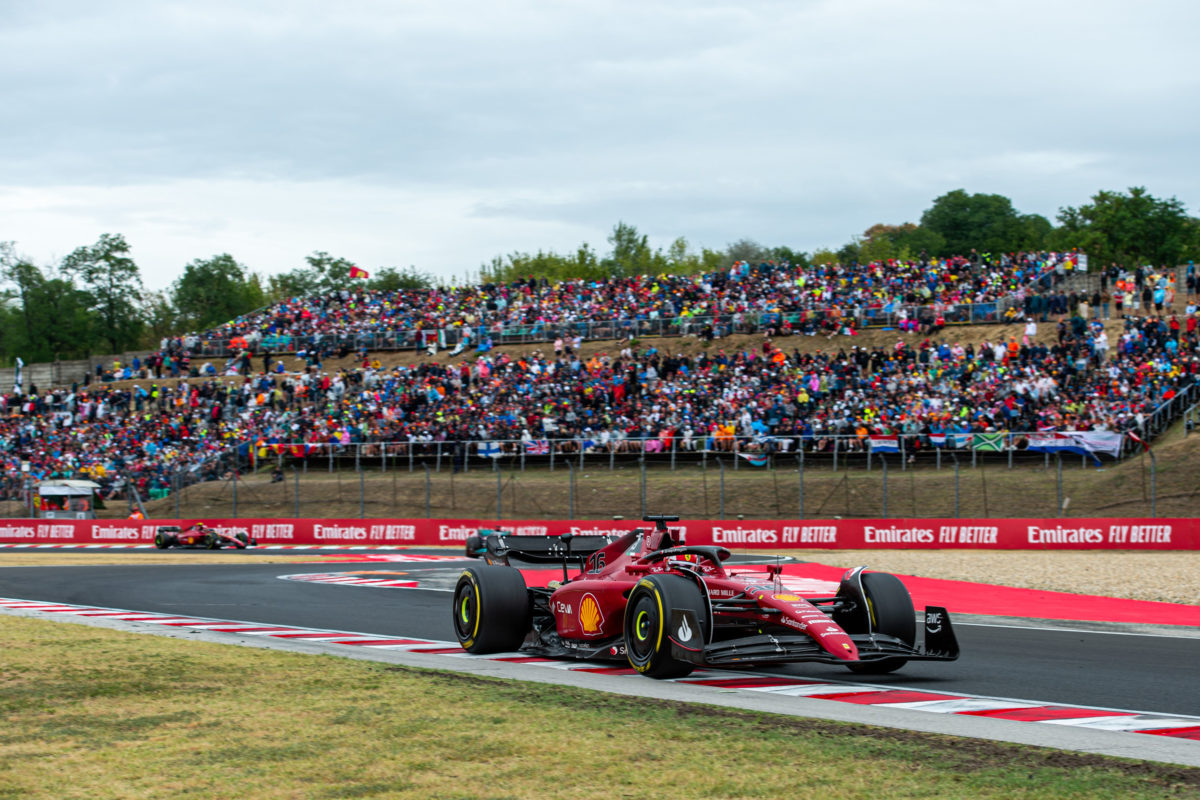 Charles Leclerc has questioned the Ferrari strategy call which saw him switch to the hard compound tyres in the Formula 1 Hungarian Grand Prix.

Leclerc led the race briefly during the opening round of pit stops cycled through, before passing George Russell to take control of the race on Lap 31.

However, it was the Ferrari call to stop the Monegasque driver and cover off Max Verstappen on Lap 39 that brought his race undone.

Worried about the prospect of an undercut from the Red Bull driver, Leclerc boxed a lap after the Dutchman to swap his medium compound tyres for a set of hard rubber.

Struggling for grip in the cool conditions thereafter, he slipped back through the field before being forced to stop again on Lap 54 and switch to the softs.

He ended up trailing home in sixth in a race which promised a far stronger result.

“Obviously the pace was really good on the medium tyres.

“Second stint also everything was under control, and then we decided to stop, put on the hard, which I don’t exactly know what are the reasons behind this decision yet, but we’ll speak with the team for me to understand.

“But clearly it wasn’t the right decision, and I made it clear that I felt good on the medium, so I don’t exactly know what happened.”

Leclerc started the race from third on the grid with a new set of medium tyres fitted, using his only remaining set of the yellow-walled rubber when he stopped for the first time.

Ferrari therefore had only the hard or soft tyres to choose from at the second stop, opting for the former given the laps remaining.

However, the decision to cover off Verstappen, who started on a set of used softs before running mediums for his next two stints, is the key question.

Mercedes did not feel the need to take the same approach with Lewis Hamilton, who’d mirrored Leclerc’s approach in terms of tyres in the opening two stints.

The Brit had taken his first stop on Lap 19, three laps later than Leclerc, and then extended his second stop out to Lap 51 where the soft tyre was fitted to his car.

While that saw him lose track position, the tyre advantage in the closing laps allowed the Mercedes driver to reel in and pass Carlos Sainz and George Russell, while gaining a further spot when Leclerc served his final stop.

As if realising its mistake, Ferrari did not repeat the strategy with Sainz, fitting the soft tyres when he stopped for the second time on Lap 47, though the Spaniard could do no better than fourth at the flag.

In championship terms, the result is a significant blow for Leclerc, who now trails points leader Verstappen by 80 points with nine races remaining.

Formula 1 heads now on its summer break, with the Ferrari driver looking forward to some time away.

“But on the other hand, I feel very motivated and I just want to get back in the car,” he said.

Formula 1 returns with the Belgian Grand Prix on August 26-28.