Van Gisbergen sweeps The Bend with victory in wet Race 23

Van Gisbergen sweeps The Bend with victory in wet Race 23 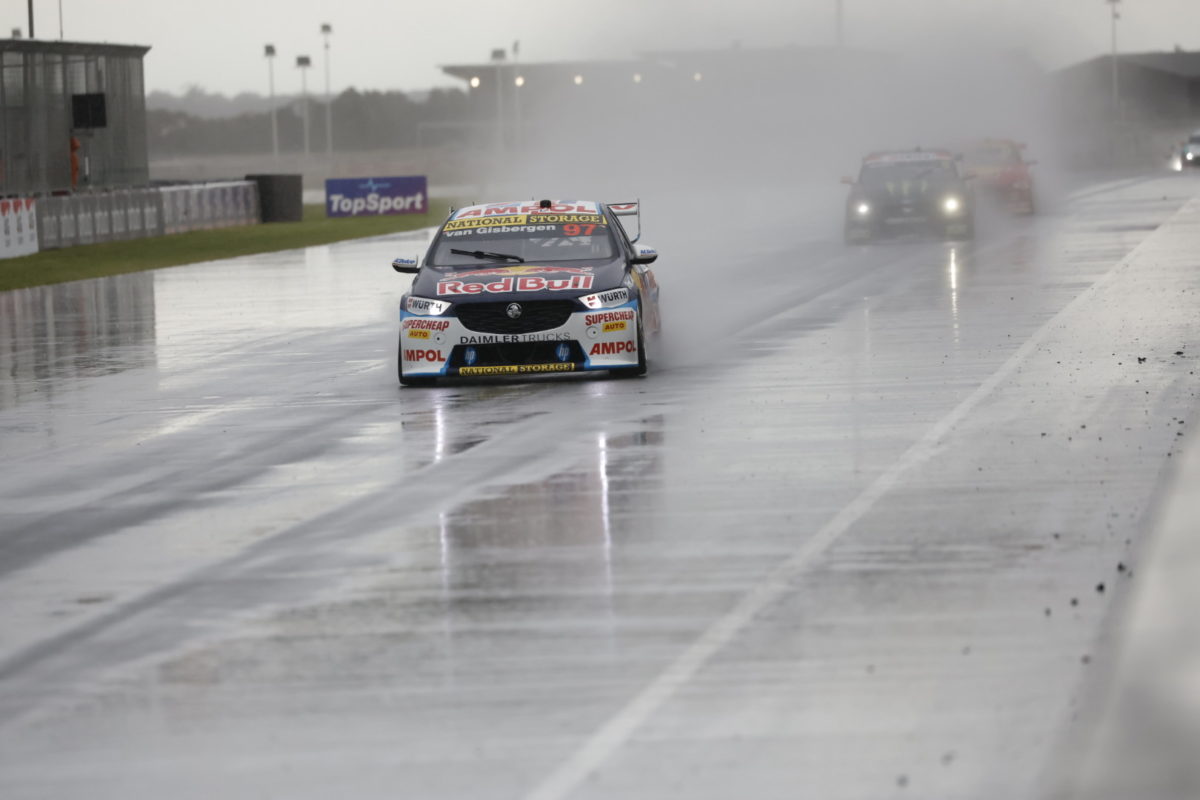 Shane van Gisbergen has completed a three-from-three with victory in a wet Race 23 of the Repco Supercars Championship at The Bend.

After a hair-raising dice with Cameron Waters and, briefly, Anton De Pasquale, the Red Bull Ampol Racing driver broke free at the end of Lap 10 and cleared out to an 8.7109s win.

Waters would retain second for the balance of the 24-lap contest in Tickford Racing’s #6 Monster Energy Mustang, while Brodie Kostecki climbed to third in Erebus Motorsport’s #99 Boost Mobile ZB Commodore.

One of those was the result of a nudge from Walkinshaw Andretti United’s Chaz Mostert (#25 Mobil 1 Optus ZB Commodore), who still managed eighth even though he had to serve a 15-second penalty at his compulsory pit stop.

As for van Gisbergen, not only did he pull off the sweep of wins at the OTR SuperSprint, but also scored a maximum 315 points given he set the fastest lap in all three of those encounters.

His margin at the top of the drivers’ standings has blown out to 393 points, with Waters taking over second spot from De Pasquale (#11 Shell V-Power Mustang), who finished the race in seventh.

The result also means that Holden has won the manufacturers’ championship for the last time ever.

“That was awesome,” said van Gisbergen.

“It’s always good racing someone who has nothing to lose. He drives hard, but respectful as well; yeah, it was awesome.

“But, once I got in front, I struggled a bit with no train tracks to follow, and then pulled away.

“What an awesome weekend; can’t thank the team enough.”

Rain had started falling as cars sat on the grid, prompting all to switch to wet tyres.

Furthermore, with the track still oily in front of pole position after the day’s earlier startline shunt, Race 23 got underway behind the Safety Car.

It was quite wet by the time the field took the green flag for what was officially Lap 3, at which time Waters assumed control given he had qualified on pole position.

Waters reclaimed the lead from van Gisbergen as they ran up the main straight to start Lap 4, while Broc Feeney (#88 Red Bull Ampol ZB Commodore) had got ahead of De Pasquale back at Turn 17.

Davison (#17 Mustang) and Mostert found themselves in a battle for sixth which ended with the latter nudging the former into a spin at the Turn 6 hairpin on Lap 6, and officials deemed that a driving infringement.

Feeney, however, was already off the road there by the time they had arrived, meaning van Gisbergen was back up to second place and able to harass Waters again.

Twice, the 2021 champion got past only for the Tickford steerer to immediately hit back, and Waters staved off another bid for the lead at the Turn 14/Turn 15/Turn 16 complex on Lap 10.

A corner later, however, he undid his good work with a lock-up which carried the #6 Mustang wide and van Gisbergen did not waste the opportunity.

That meant a top five of #97, #6, De Pasquale, James Courtney (#5 Snowy River Caravans Mustang) at a few seconds further back, and Will Brown (#9 Boost Mobile ZB Commodore), with Feeney a spot further behind.

Van Gisbergen cleared out to a four-second lead on Lap 13, by which time Davison had slipped from eighth to 10th after an apparently unassisted spin.

De Pasquale dropped from third to sixth with a rotation of his own at the Turn 6 hairpin on Lap 14, and it would soon be Brodie Kostecki passing Erebus team-mate Brown for third, on Lap 16.

Given the rain continued to fall and tyre temperature was thus at a premium, the front-runners ran long.

De Pasquale pitted from sixth, behind Feeney, on Lap 19, then very nearly spun on his out lap when he got loose through Turn 12 and dropped a wheel onto the edge of the race track.

By then, the top three of van Gisbergen, Waters, and Brodie Kostecki were trading fastest laps, although the former was circulating upwards of eight seconds clear.

Brown and Feeney stopped on Lap 22 and resumed a few seconds ahead of De Pasquale.

The rest waited until the very last opportunity to meet the CPS requirement, van Gisbergen leading Waters into the lane with a 9.5s margin.

He, Waters, Brodie Kostecki, and Davison retained first through fourth on the final lap, while Feeney finished sixth, from Brown and De Pasquale.

Mostert recovered somewhat from the hold penalty to get home in eighth, ahead of team-mate Nick Percat (#2 Mobil 1 NTI ZB Commodore) and Lee Holdsworth (#10 Penrite Mustang), while Courtney faded to 12th.

The next event is the Penrite Oil Sandown SuperSprint, on August 19-21.