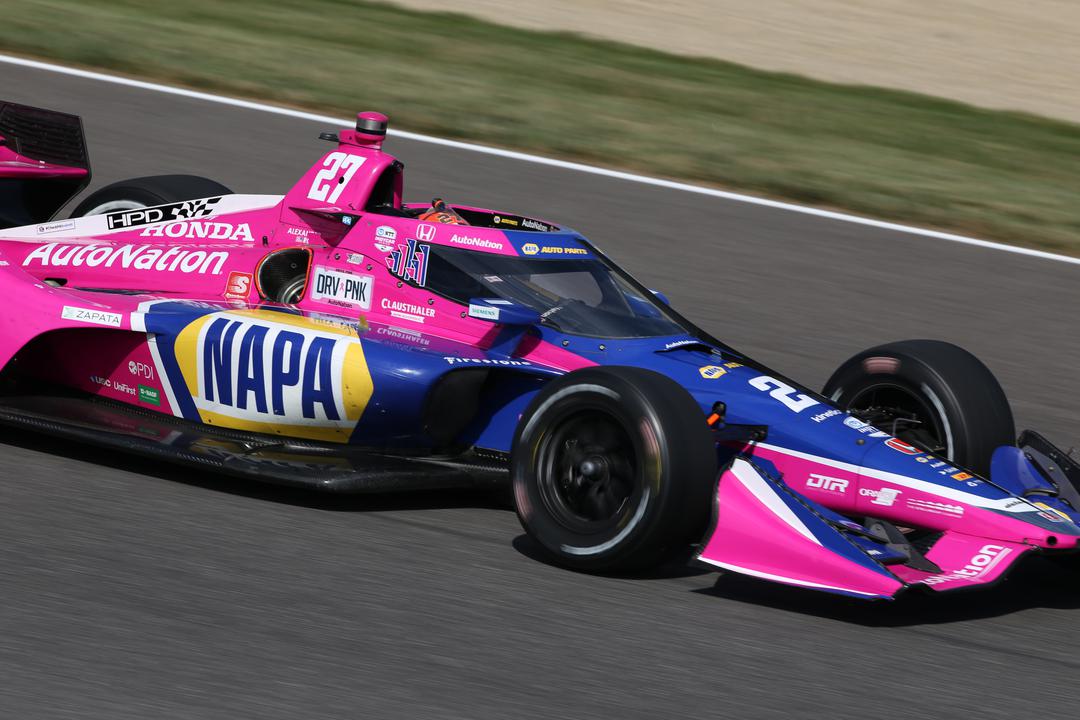 Alexander Rossi has won the Indianapolis Grand Prix as Will Power reclaimed the IndyCar Series lead with a fightback podium.

Rossi ran in the effective top three throughout the 85-lap race and was second when Andretti Autosport team-mate Colton Herta suffered an apparent electronics failure just in front of him on Lap 42.

From there, the #27 Honda was never headed as the 2016 Indianapolis 500 winner broke a three-year victory drought.

Rahal Letterman Lanigan Racing rookie Christian Lundgaard finished second at 3.5441s in arrears and Power salvaged third at another 11.3040s back after dropping as low as 16th due to incidents on each of the first two laps.

Scott McLaughlin and Josef Newgarden made it all three Team Penske Chevrolets in the top five, with Scott Dixon getting home eighth and Chip Ganassi Racing team-mate Marcus Ericsson in 11th.

In the series standings, Power is back on top by a nine-point margin over Ericsson with four races to go in 2022.

The start at The Brickyard was rather chaotic.

Pole-sitter Felix Rosenqvist (McLaren SP) retained the lead and Rossi second place, while Newgarden jumped from fifth to third by going deep under brakes at the first corner.

At Turn 2, Row 2 qualifier Pato O’Ward (McLaren SP) spun as a result of Herta (Andretti w/ Curb-Agajanian) bumping Power into the left-rear corner of the #5 Chevrolet.

Power dropped to 11th in the mess and lost another five positions on Lap 2 when he copped contact from Helio Castroneves (Meyer Shank Racing), who lunged between the Queenslander and David Malukas (Dale Coyne Racing w/ HMD Motorsports) at Turn 7.

A Caution was called on Lap 3 due to a Dalton Kellett (AJ Foyt Racing) spin and stall at that same corner, after he touched Jimmie Johnson (Ganassi).

Rosenqvist continued to lead from Rossi, but Herta and Lundgaard inherited third and fourth as a result of a two-position drop penalty for Newgarden for breaching track limits.

Devlin DeFrancesco (Andretti) was first of those who started on reds in seventh, with McLaughlin second of that small group in ninth, from 15th on the grid.

On blacks, Dixon and Ericsson were 14th and 20th respectively after bad qualifying sessions, with Power dropping to 23rd having used the Caution to switch to used reds.

At the Lap 6 restart, Rossi went under Rosenqvist at Turn 1 but outbraked himself, touched the grass, and ultimately lost second place to Herta instead.

Herta passed Rosenqvist for the lead on Lap 8 at Turn 7 and Rossi relegated the #5 Chevrolet to second at Turn 12, before Lundgaard also went down the inside of the Swede on Lap 9 at Turn 1.

The pit stops were soon on in earnest and McLaughlin inherited the lead on Lap 14 when Herta, Rossi, Lundgaard and Rosenqvist were all into the lane to swap to reds.

McLaughlin and Ericsson went all the way to Lap 23, at which time they switched compounds, and Johnson completed the first cycle on Lap 24.

Power assumed the lead, albeit on older tyres, from O’Ward, Takuma Sato (DCR w/ Rick Ware Racing), Herta, Rossi, Lundgaard, McLaughlin, and Newgarden, with McLaughlin on blacks and the rest of those eight on reds.

Also on reds were Rosenqvist in 13th, Dixon in 16th, and Ericsson in 19th.

Sato dropped from third to sixth on Lap 26, and O’Ward was in apparent fuel save mode.

He gave up second to Herta on Lap 28, then third to Rossi and fourth to Lundgaard on Lap 29, as Power continued to lead by more than four seconds.

O’Ward pitted for his second set of reds on Lap 30 and Power, who was still 3.7s up on second-placed Herta, did likewise on Lap 31.

Simon Pagenaud (MSR) was running sixth when he ran out of fuel on Lap 35 and began to crawl.

Virtually everyone behind saw that and headed for pit lane, but IndyCar Race Control held off on the yellow until the top five got back around to take service as well.

With virtually everyone having pitted twice, it was a straight fight for 11 of the top 12, who were all on reds.

Herta retained the lead, from Rossi, Lundgaard, Power, and Johnson, the latter of whom had only pitted once.

McLaughlin was sixth having just jumped back ahead of Newgarden in the pits, with Car #2 in seventh, from O’Ward, Sato, Rinus VeeKay (Ed Carpenter Racing), Rosenqvist, and Graham Rahal (RLLR) in 12th.

Alex Palou (Ganassi) was first of those on blacks in 13th position, with Dixon 14th and Ericsson 16th on reds.

The second restart of the day came on Lap 40 and Herta was still leading by 0.6s when he slowed on Lap 42 and eventually dawdled back into pit lane.

Replays suggested that a thump of the Turn 8 kerb may have damaged his electronics, given it immediately preceded the loss of virtually all pace in the #26 Honda.

Regardless, Rossi was in front and he stretched the gap over Lundgaard to more than two seconds on Lap 44, with Power third and McLaughlin fourth as Johnson fell down the order.

Power kicked off the final pit stop cycle on Lap 59, and everyone else was in within two more laps, with most onto new reds.

For the run home, Rossi emerged with a 2.5s lead over Lundgaard and a roughly 10-second gap over third-placed Power.

As Rossi trended towards a four-second lead over Lundgaard, Power was in fuel save mode and McLaughlin closed to within 0.7s of his team-mate with eight laps to go.

A puff of smoke from the left-rear of the #27 Honda under load might have caused some nervousness, but Rossi was 4.2757s up when he took the white flag, and able to greet the chequers before anyone else.

It was far closer in the battle for the final podium position, although how much of a battle that really was is questionable given Power’s title hopes.

McLaughlin was only 0.4100s behind the Queenslander at the start of the final lap and the team-mates finished 1.1213s apart.

IndyCar is in action again next weekend (August 5-7) on the streets of Nashville, with that race streamed live and ad-free on Stan Sport.