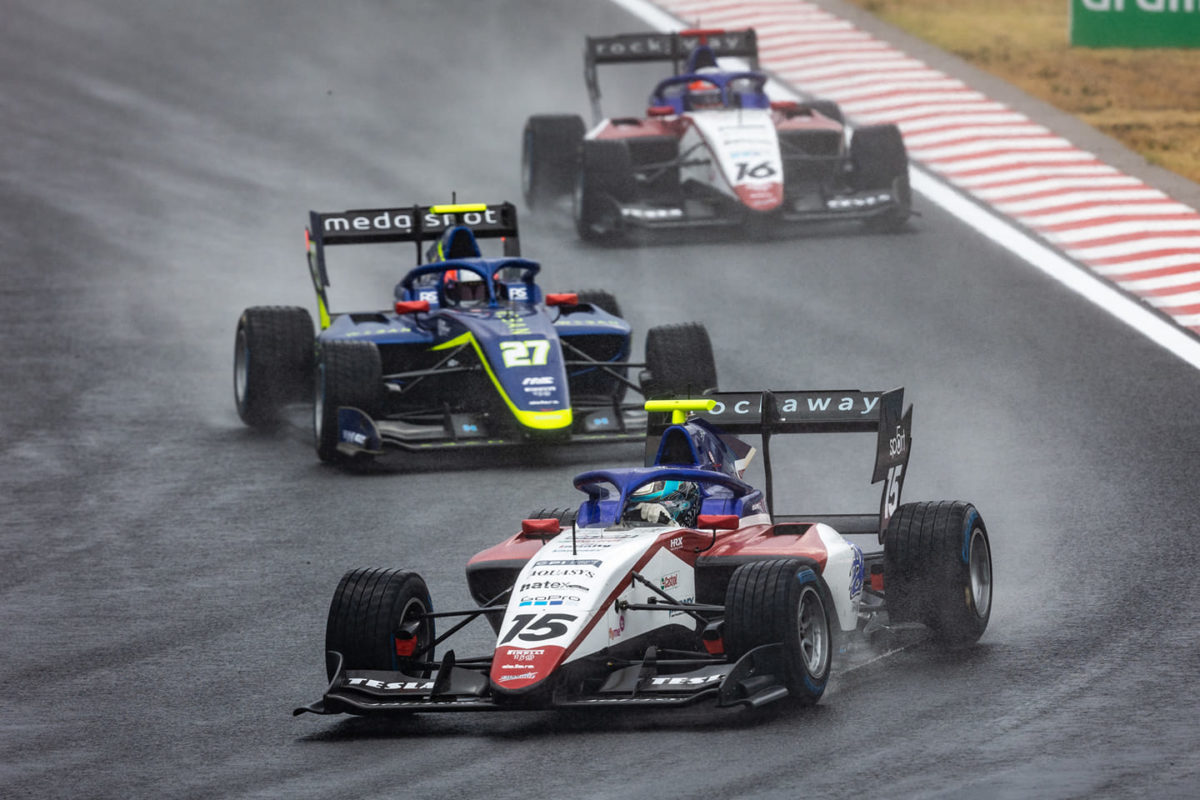 Alexander Smolyar won with comparative ease while changing conditions mid-race saw a handful of drivers pit for slick tyres, charging their way forward in the closing laps more than 10 seconds a lap faster than those on wets.

Mansell crossed the line 23rd at the end of the race, losing out to the slick-shod runners as he remained on the grooved tyres throughout.

For the second time in the weekend, it was a wet start to the race, though unlike Saturday’s race it was a standing start.

A strong opening from Mansell saw the Aussie climb from 24th on the grid to 18th by the first split, though he slipped back two spots later in the lap.

Taking an early lead, Smolyer extended a comfortable advantage at a rate of more than half a second per lap.

Helping that was a battle between Zane Maloney and Oliver Bearman, who were still pulling clear of Jak Crawford in fourth despite their squabble.

Mansell slipped to 21st after the opening exchanges, running in a comparatively lonely position – 1.5 seconds clear of Enzo Trulli and a similar distance behind Brad Benavides.

After 15 laps, Francesco Pizzi became the first driver to brave the switch onto slicks.

Others began to lay up, ready to follow suit, Juan Manuel Correa and Jonny Edgar in next time by despite Pizzi’s sector times being significantly slower than those who’d remained on wets.

That was until Correa began to find huge chunks of time, on Lap 18 recording a time five seconds faster than the race leader. He was 23rd at the time, over a minute behind the front of the race.

It proved to be the cross over point as those on the dry tyres began to generate the temperature needed to find grip and begin making ground.

Next time around, Zak O’Sullivan was more than eight seconds faster than the race leader as he set a new fastest lap on Lap 20.

Having remained on wets, Mansell ran as high as 18th as those around him pitted, only to drop down the order as the slick runners charged back through the field.

While those on slicks had a significant pace advantage, the front of the race had moved out of reach.

It meant that, even though they remained on wets, Smolyar won from Maloney over Bearman (by 0.025s).

Another lap, however, and O’Sullivan would have won with ease as he reached as high as fourth at the chequered flag.

Mansell slipped back to 23rd at the end of the 24-lap race, a net one place gain on his starting spot.

The FIA Formula 3 Championship is back in action in support of the Formula 1 Belgian Grand Prix on August 26-28.