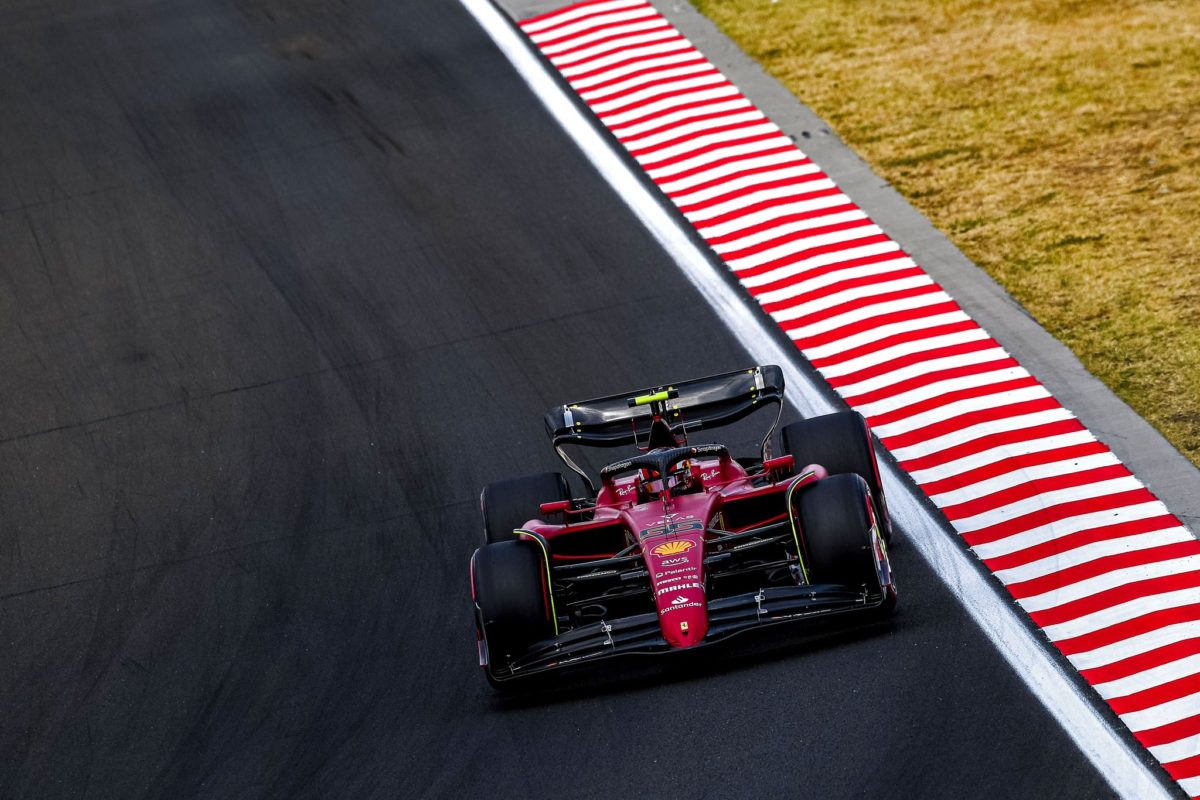 Carlos Sainz has gone fastest in the opening practice session of the weekend for the Formula 1 Hungarian Grand Prix.

The Spaniard was 0.130s clear of Max Verstappen with Charles Leclerc third best, 0.289s away from his team-mate out front.

Both Aston Martin drivers headed out early as they looked to gain data on a new rear wing development.

Variable weather over the weekend saw most head out immediately, the hot and sunny conditions expected to disappear on Saturday with thunderstorms predicted.

On the soft tyres, Verstappen set the early pace on 1:21.235s, just over a tenth quicker than Sainz with Daniel Ricciardo third just 0.1s further back.

Following a significant suite of upgrades last time out, McLaren has a new front corner and diffuser, the former designed to aid cooling and the latter to add load.

Both Ferraris had solid initial pace, with Leclerc going fastest on a 1:19.863s to leave both Maranello entries towards the top of the timesheets.

At Red Bull, Sergio Perez didn’t have the same immediate feel as Verstappen, trailing his team-mate by a full second after 20 minutes.

The Mexican subsequently improved to 1:20.211s to sit within 0.3s of the sister car, and 0.5s of Sainz who had gone fastest.

Notably, the top four on the timing had the soft tyres fitted, the rest of the field on the medium or the hard, the latter preferred by most.

Midway through the session, Mercedes switched Lewis Hamilton and George Russell into the medium tyres, the duo rising up the order as a result.

Russell slotted into second on a 1:19.606s, while Hamilton was fifth just over a tenth slower.

Those who hadn’t already soon swapped over to the red-walled rubber for an early qualifying simulation.

With just under 20 minutes remaining, Sainz returned to the top of the timesheets with a 1:19.262s, demoting Leclerc by 0.1s.

Verstappen then reclaimed the top spot with 16 minutes to run with a 1:18.880s, while Perez slipped to seventh as Ricciardo also improved.

Norris slotted in behind his team-mate when he had a set of the soft tyres fitted, the pair split by 0.4s.

Having sat at the foot of the timesheets for much of the session, Aston Martin saw Stroll move up to 12th on his qualifying simulation, before being demoted a spot when Vettel went 11th fastest.

That left Nicholas Latifi in 20th, behind Robert Kubica who was aboard Valtteri Bottas’ car for the session.

A lap inside the final minutes saw Sainz end it fastest, Verstappen second with Leclerc third best – the top three split by 0.2s after the opening hour.

Next best was Norris, who also improved late with the soft compound tyres on his car, from Russell, Perez, Hamilton, and Ricciardo.

A second hour of practice follows this afternoon, Free Practice 2 scheduled to commence at 01:00 AEDT.