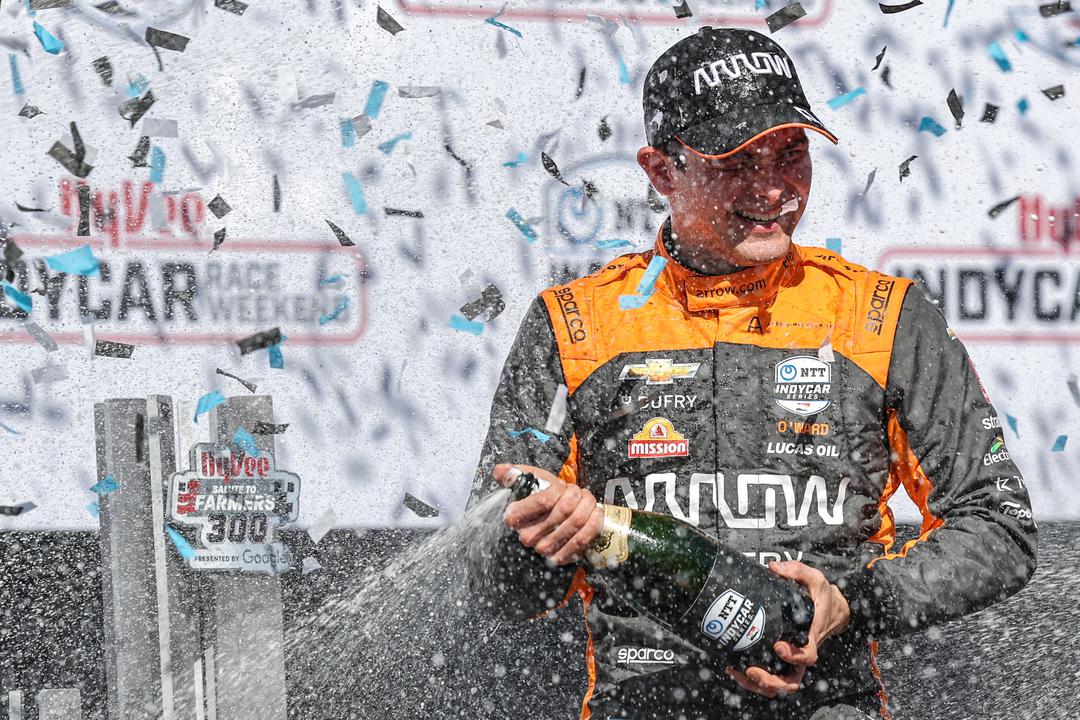 Pato O’Ward says he is taking bigger risks than his rivals in a bid to rescue his IndyCar title hopes as the finale looms on the horizon.

O’Ward has moved up to fifth in the series standings, 36 points behind leader Marcus Ericsson, after a second place and then a win in the Iowa double-header.

However, between those twin podiums and his other victory this season, back in Race 4 at Barber Motorsports Park, the McLaren SP driver recorded just two top 10 finishes in six races.

He got caught out with slicks on a wet track in the Indianapolis road course race, suffered engine problems at Road America and Mid-Ohio, and was uncompetitive in Toronto.

While three of the top four in the series have just one win each from 12 thus far in 2022, O’Ward feels he has to take a different approach.

“Everybody that’s fighting for the championship is having good weekends; no one is having bad weekends,” he observed.

“For us, we’ve thrown away and we’ve given away an easy hundred points just either whether it was a strategy or if it was… I won’t mention the other ones.

“We’ve just thrown away a lot of points that would have put us in a way better position of where we are right now.

“I have no other choice but to try and claw back. We can just be more risky than others.

“[Positions] Four, five, and six for me doesn’t really change anything.

“I don’t care if we’re sixth or fourth; we need to go for one and two because we’ve already got a four and a three.

“The only way to do that is to win because you’re not going to get those points by being consistently in the top five.

“I think if you’re in the lead, it would be a different story, but we’re not.”

O’Ward believes his performance at Iowa, a short oval which is tough on tyres, demonstrated that he is able to temper his aggression when need be.

“The more laps you do, you gain knowledge,” said the Mexican.

“I mean, these guys lap circles around me in terms of knowledge like Will [Power], Scott [Dixon] and Josef [Newgarden].

“Whenever you’re up to fight with them… they were super quick, specifically the Penskes.

“The Penskes were extremely, extremely hard to fight with. Everything had to go perfect in order to either get them on a pit stop exchange or get them on the track.

“I think Iowa is just different because it’s a tyre deg race. Other ones play more into the fuel, which I think personally is a lot more boring.

“That’s why Iowa is so good. It’s just because it really plays into you have to be smart.

“You have to be smart not just if you’re leading, but the leader also has to be smart because he’ll go through the traffic.

“I think that’s why the races here are so good.”

As many as 54 points are on offer to each driver this coming weekend, when the IndyCar field is back on the road course at The Brickyard as part of a shared bill with NASCAR.

The sole Practice session starts on Friday night at 23:30 AEST, followed by Qualifying on Saturday morning at 03:00 AEST.

Both of those sessions, and the 85-lap race, are live and ad-free on Stan Sport.