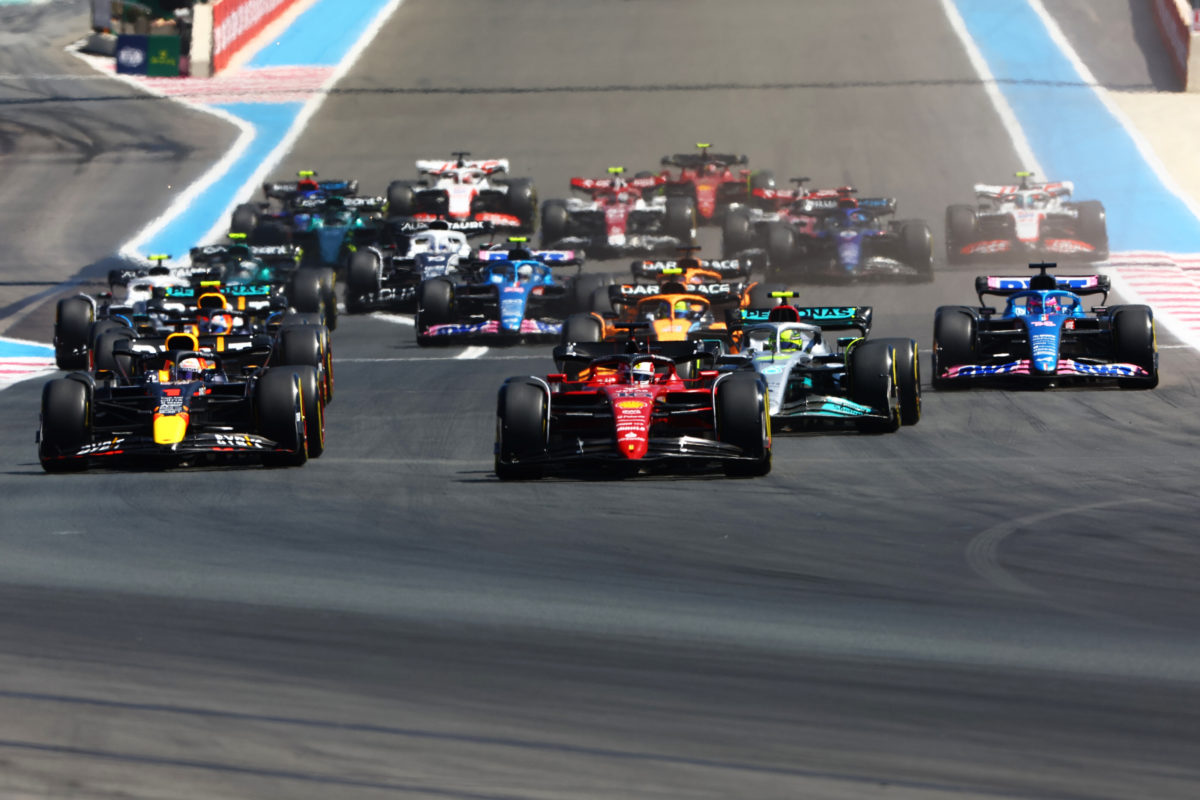 Leclerc controlled the early stages of the race, resisting pressure from Verstappen before a costly mistake saw his race end in the tyre wall.

Unchallenged from that point, Verstappen went on to win from Lewis Hamilton, with George Russell picking Sergio Perez’s pocket in the final laps to steal the final podium place.

An even start saw Leclerc head Verstappen into the opening corner, Hamilton slotting into third in front of Perez with Alonso rising to fifth.

Ricciardo was also an early mover, climbing one spot over Yuki Tsunoda to trail Lando Norris who dropped back in the opening corners.

Tsunoda had a spin at the chicane on the back straight, the Scuderia AlphaTauri driver falling to the rear of the field but able to rejoin.

The Japanese driver was the innocent victim as Esteban Ocon had a moment on the apex of the left-hander, the Alpine driver making contact with Tsunoda who spun as a result.

Leclerc quickly extended a more than one second advantage over Verstappen, ensuring he was clear of DRS range when that was enabled at the start of Lap 3.

However, the Dutchman was able to close the gap soon after, shadowing the Ferrari ahead as they began Lap 4.

Into De Beausset on Lap 6, Leclerc was forced to defend after a poor run out of the chicane allowed Verstappen a run in the slipstream.

It was the closest the Red Bull got in the opening phase of the race, the pair running close to one another until Leclerc began to inch clear once again from Lap 12.

Verstappen pitted on Lap 17, rejoining in the gap behind Norris in an effective seventh place.

Ferrari did not immediately react, leaving Leclerc out where he skated out at De Beausset on Lap 18 where he made heavy contact with the tyre barrier.

The rear end of the car slid away from the Monegasque, firing him across the runoff and into the tyres on the outside of the long right-hander.

It drew the Safety Car, and a flurry of activity in the pit lane as those who hadn’t stopped took the opportunity to do so.

Adding insult to injury, Sainz was sent out of his pit box into the path of Alex Albon, forcing the Williams to stand on the brakes in pit lane, for which he would be handed a five-second penalty soon after.

With Leclerc out, Verstappen assumed the race lead from Hamilton, with Perez third and George Russell fourth as racing resumed on Lap 21.

Sainz put a move on Ricciardo at the restart, the Ferrari taking seventh into Turn 1 before passing the other McLaren into the chicane on the Mistral Straight later on the same lap.

The Spaniard had the medium compound tyres fitted versus the hards on those around him.

Alonso also fell victim soon after the restart as the Ferrari quickly climbed to fifth on Lap 22.

His progress the stalled behind Russell, unable to pass the Mercedes until midway around Lap 30.

By the time he did so, Verstappen had extended a four second lead over Hamilton, while Perez had dropped two seconds back from the Brit in third.

It took until Lap 41 for Sainz to mount a challenge on Perez, looking to repeat the move he put on Mercedes only for his efforts to be more robustly defended.

The pair went wheel to wheel through the final sector, Ferrari calling him into the pits as he did so.

“Not now, not now,” came the response.

Russell then looked to put a move on Perez at the chicane on the back straight, the Mexican having to take avoiding action.

Having passed Perez, Sainz boxed at the end of Lap 42, dropping to ninth with a set of medium tyres.

At Mercedes, Russell‘s frustrations were boiling over, prompting team boss Toto Wolff to instruct his driver to calm down over the radio.

The incident between he and Perez was looked into, though the stewards deemed no further investigation was warranted.

It was a brief interrupting and competitive running soon resumed with race-leader Verstappen on Lap 50.

As it did so, Russell caught Perez sleeping, mugging the Red Bull who was slow to react to the withdrawal of the Virtual Safety Car.

Perez remained in contact with the Mercedes ahead, putting the Brit under pressure.

That forced an error, leaving him in touching distance as they started the final lap, though a move was never forthcoming.

Out front, Verstappen was untouchable, winning by 10 seconds over Hamilton while Russell hung on to round out the podium.

Perez was fourth while Sainz was fifth for Ferrari, the top 10 completed by Alonso, Norris, Ocon, Ricciardo, and Lance Stroll, who fended off his team-mate in the final corners.

Verstappen now holds a 63-point advantage over Leclerc at the top of the drivers’ standings, while Red Bull holds an 82-point lead in the constructors’ competition over Ferrari.

Formula 1 heads to the Hungarian Grand Prix next weekend for the final race before the summer break.