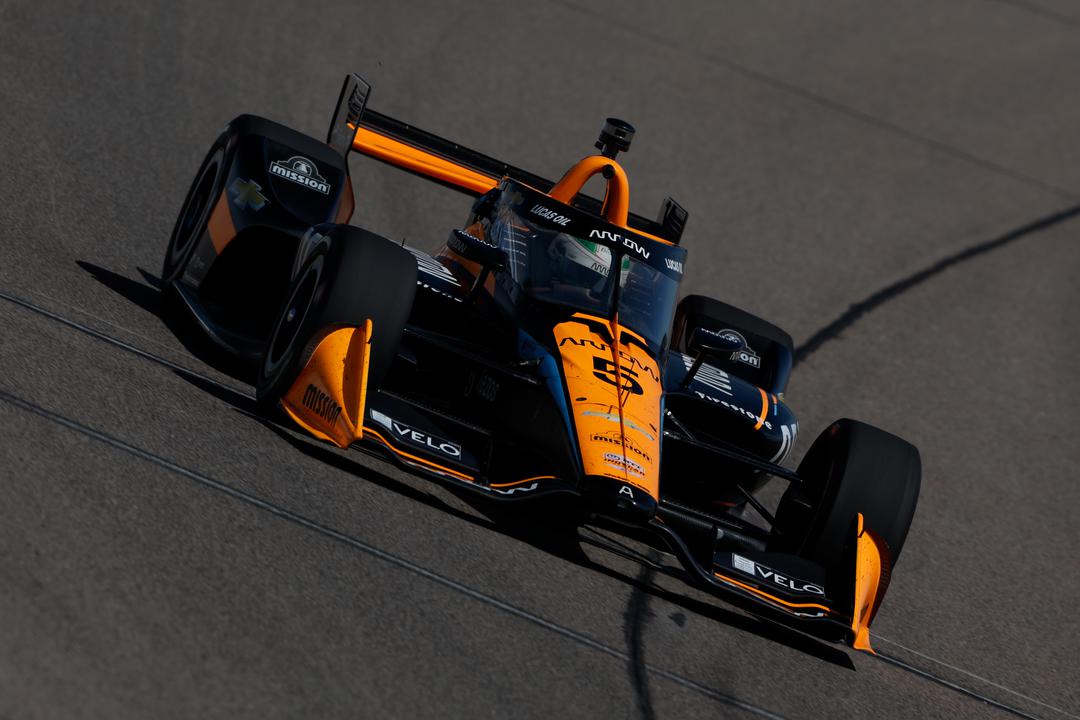 McLaren SP’s Pato O’Ward has won Race 2 of the Iowa IndyCar double-header after Josef Newgarden crashed out of the lead with less than 70 laps to go.

Team Penske once again got two cars onto the podium but the seemingly unbeatable Newgarden missed out on a sweep of the event when the #2 Chevrolet swapped ends on Lap 235, although whether the incident was a case of driver error remains to be seen.

The incident gave O’Ward the lead for the run home and he turned that into a 4.2476s victory after 300 laps, with Will Power finishing second and Scott McLaughlin third.

Following those three Chevs were three of the Chip Ganassi Racing Hondas, with Scott Dixon fourth from 18th on the grid, Jimmie Johnson a career-best fifth, and Marcus Ericsson clinging onto the series lead by getting home in sixth.

Despite missing out on the win after initially leading the race for the second day in a row, Power is now back into second in the series standings at just eight points behind Ericsson, while Newgarden and Dixon are tied for third at 34 points in arrears.

Power had once again converted pole position into the early lead, with Newgarden assuming second and O’Ward jumping from seventh on the grid to third position by running the high line.

Power stretched his lead to a full second on Lap 23, although it would soon start to fluctuate as the front-runners picked their way through the tail of the field.

Meanwhile, McLaughlin and Felix Rosenqvist (McLaren SP) were into the top six, with Ericsson up to seventh, as Daly and Harvey fell down the order.

Dixon was barely still on the lead lap when he pitted on Lap 60 and O’Ward was into the lane from 10 seconds behind Power on Lap 62.

McLaughlin stopped on Lap 63 while Power and Newgarden ran until Lap 65, and they almost touched when #2 got an overlap as they crossed the speed derestriction line at exit.

Once the cycle completed, it was Power back on top, by about half a second over Newgarden, then O’Ward, Johnson from 13th on the grid, Ericsson, McLaughlin, Dixon, and Rosenqvist, with only 12 cars on the lead lap.

The lead changed on Lap 84 when Power got held up as he tried to lap 11th-placed Romain Grosjean (Andretti), allowing Newgarden to squeeze past on the inside of Turn 1/Turn 2.

Newgarden’s margin was a full second on Lap 99, by which time Ericsson had just passed Johnson for fourth and Dixon was last on the lead lap in seventh position.

Johnson, McLaughlin, and Dixon had all been lapped by the time the first Caution of the race was called on Lap 120, in response to a crash for Kyle Kirkwood (AJ Foyt Racing).

Kirkwood had got caught high at Turn 2 as Newgarden sliced between him and Rinus VeeKay (ECR), and the yellow flag fell very kindly for the vast majority who had not yet taken their second pit stop.

Newgarden had been three seconds to the good and hence maintained the lead when he pitted, from Power, O’Ward, and Ericsson.

The next 12 got back on the lead lap, with McLaughlin fifth from Johnson, Dixon, Rosenqvist, and Colton Herta (Andretti w/ Curb-Agajanian), who started 12th after a nine-position grid penalty for an unapproved engine change.

At the Lap 133 restart, Ericsson tried to go down the inside of O’Ward, who then got a run high on Power, although neither was successful in making a move.

Dixon did get by Johnson for sixth, while O’Ward continued to stalk Power.

McLaughlin dropped to eighth when he was passed by Dixon, Rosenqvist, and Johnson in quick succession, before Johnson re-passed Rosenqvist for sixth spot on Lap 180.

Newgarden had been circulating roughly one second clear of Power until he got loose when David Malukas (DCR w/ HMD Motorsports) blocked his path on Lap 182 at Turn 4, allowing the Queenslander to close right up.

The gap was back over a second when both pitted on Lap 195 and while they maintained position relative to each other, they were split on exit by O’Ward, who had stopped two laps earlier.

That was the top three once the cycle was finished, from McLaughlin, Ericsson, Dixon, Johnson, and Callum Ilott (Juncos Hollinger Racing), who was last of those on the lead lap.

Dixon passed Ericsson on Lap 208 and Newgarden lapped Ilott on Lap 215, as he approached a two-second margin over O’Ward.

The figure was over three seconds with exactly three quarters of the race elapsed, before the leader lapped seventh-placed Johnson on Lap 233.

Two laps later, disaster struck for Newgarden when he lost the rear at Turn 4 and smashed into the wall, with broadcast footage suggesting a possible mechanical failure for the #2 Chevrolet.

O’Ward inherited a comfortable lead and hence was first off pit lane when everyone used the yellow to take their final stop.

Behind him was Power, then Dixon, McLaughlin, Ericsson, Johnson, Grosjean, Herta, Malukas, Ilott in 10th, Sato, Rosenqvist last on the lead lap in 12th, and Palou in 13th.

The restart came on Lap 250, with McLaughlin passing Dixon for third and Johnson rounding up Ericsson within the lap too.

O’Ward cleared out to the tune of one second within nine laps, as McLaughlin ran a few tenths behind Power.

Ericsson re-passed Johnson on Lap 273 but the NASCAR champion continued to harass the Indianapolis 500 winner and would eventually get back ahead again with a bit of help from lapped traffic on Lap 292.

O’Ward got as far as around five seconds up the road from Power before he took the chequered flag for his second victory of the season, with McLaughlin finishing 9.4464s from the lead.

Ilott was last of those on the lead lap in 11th, ahead of Herta and Palou, with Alexander Rossi (Andretti) four laps down in 18th and Newgarden classified 24th.

The 12th event of the season takes place this coming weekend (July 29-30, local time) on the Indianapolis road course.