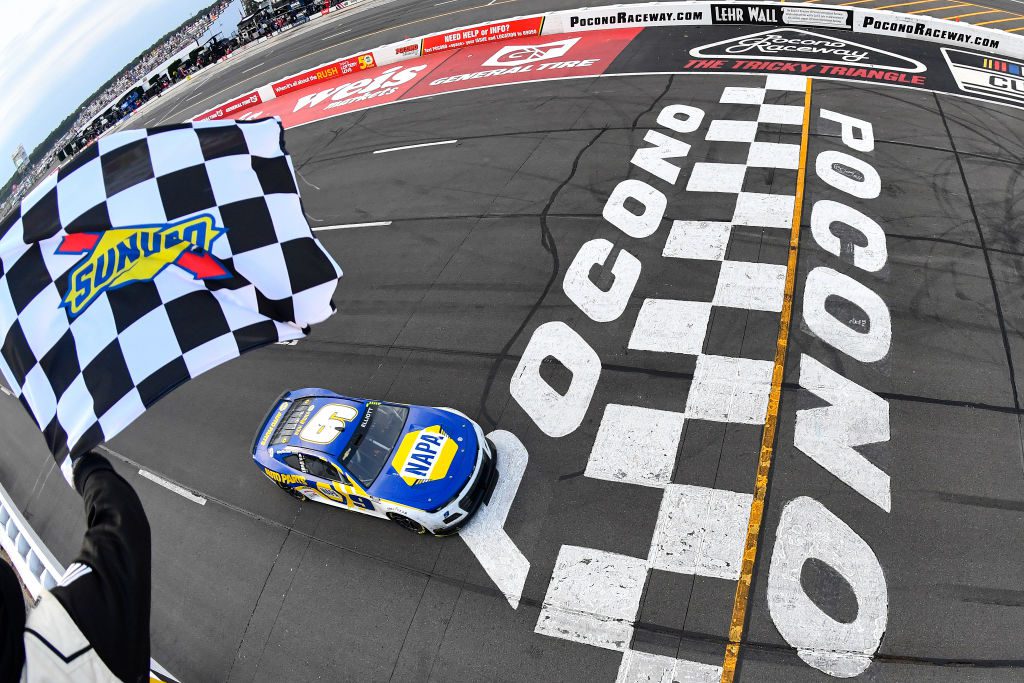 NASCAR Cup Series managing director Brad Moran explained, “There was some issues discovered that affect aero of the vehicle.

“The part was the front fascia and there really was no reason why there was some material that was somewhere it shouldn’t have been, and that does basically come down to a DQ [disqualification].”

The sanction also moves Tyler Reddick up to second place and Daniel Suarez into third.

There was also drama prior the race when 23XI Racing driver Kurt Busch was sidelined after his big crash in qualifying, which meant Ty Gibbs would make his Cup Series debut in Car #45.

Hamlin started on pole, and on the exit of Turn 1 on Lap 1, he scraped the outside wall, letting Kyle Busch take the lead.

On Lap 6, Daytona 500 winner Austin Cindric found trouble with a spin which would put him out of contention for the remainder of the race.

In Stage 2 on Lap 40, Hamlin spun off Turn 2, putting him to the back of the field a third of the way through the race.

Strategy games were played at the end of Stage 2, with Erik Jones running long and peaking into the lead, as well as Ryan Blaney and Bubba Wallace getting some time out front as well.

Kyle Busch was able to win Stage 2 and looked to be the favourite to take the chequered flag.

Chastain, however, looked to make himself a contender for the win, with he and Hamlin having the best pit stop times, beating Busch’s crew by three seconds.

After trouble with a flat tyre, Blaney’s day went from bad to worse, spinning off Turn 3 and making heavy contact with the inside wall.

The Penske driver was okay and walked away from the crash.

On the restart, rivals Hamlin and Chastain lined up on the front row, both showing race-winning speed.

On the exit of Turn 1, Hamlin ran Chastain up the race track, and Chastain bounced off the outside wall, got tagged by an unsuspecting Kevin Harvick, and spun into the inside wall.

“I think that’s something that’s been owed to me for a few months now,” Chastain said.

“I’m proud of the effort by Trackhouse, it’s week in and week out we keep bringing fast Chevy Camaros.

“Yeah, I’ve been owed that and probably more for a few months now.”

Chastain was speechless after being asked if the rivalry was now over with Hamlin.

Back on the track, Hamlin took the lead and eventually the race win in the preliminary classification, before NASCAR officials discovered the technical breach.

Gibbs was classified 16th after reaching the chequered flag in 18th, an impressive first outing for the eight-time Xfinity Series winner.

NASCAR returns next week to the Indianapolis road course for a double-header with the IndyCar Series.