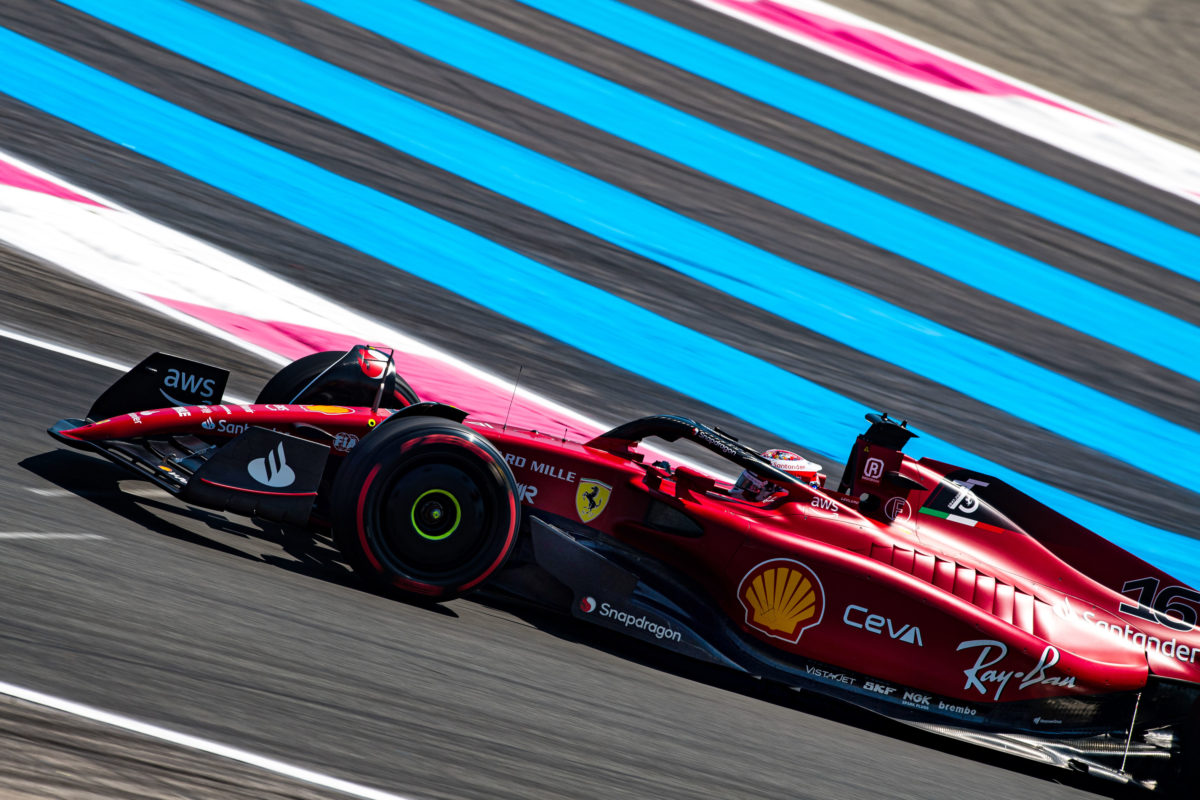 Enjoying the benefit of a slipstream from Carlos Sainz, Leclerc topped the session by 0.3s over Max Verstappen.

Sergio Perez will line up third, joined on the second row by Lewis Hamilton, while Sainz will drop to the rear of the grid owing to power unit penalties.

Aston Martin and Scuderia AlphaTauri both sent their cars out as Qualifying began, the two squads having battled for pace throughout practice.

Leclerc was also among those out as the session commenced, as was Perez for Red Bull.

Perez, by comparison, could managed only a 1:32.354s as he slotted into second fastest.

Verstappen’s first flying lap resulted in a 1:31.891s to bump his Red Bull team-mate down a spot.

Only with nine minutes remaining did Sainz venture out of the pits, the Spaniard managed the third best lap of the session, a 1:32.297s, splitting to two Red Bulls.

With four minutes remaining in Qualifying 1, the bulk of the field trundled back out on track, including Kevin Magnussen who’d not set a time to that point.

Leclerc, Sainz, and Lando Norris were not among them, the trio comfortable with their efforts, the latter fifth fastest with a 1:32.672s to that point.

His McLaren team-mate was only 12th, a 1:33.404 leaving Ricciardo at risk ahead of the final flurry to escape the first round of eliminations.

A spin from Alex Albon cost him any chance of improving, the Williams driver sitting 13th at the time.

A moment for Guanyu Zhou meant the Alfa Romeo Sauber driver failed to improve on his earlier effort and was the first driver cut from the session.

He was joined by Gasly, Lance Stroll, and Nicholas Latifi, while a track limits violation saw Mick Schumacher fall into the bottom five.

The two Mercedes were out first as Qualifying 2 began, Hamilton recording a 1:32.329s to opening the session.

That lasted only until Perez completed his first timed lap, a 1:32.120s for the Mexican which became second with Verstappen set a 1:31.990s as times tumbled quickly as the phase began.

Ferrari sent Sainz out on a set of new soft tyres, the Spaniard going fastest of anyone with a 1:31.081s.

Sitting in the elimination zone in the final four minutes of the segment were Sebastian Vettel, George Russell, Esteban Ocon, Albon, and Yuki Tsunoda.

Only Sainz and Verstappen stayed in the sheds, the remaining 13 runners heading out with a view of improving or safeguarding their place in Qualifying 3.

The timing screens lit up with a host of personal best microsectors, the order changing rapidly as drivers completed their laps.

When the order settled, Ricciardo, Ocon, Valtteri Bottas, Vettel, and Albon all found themselves on the outer.

At the other end of the timing screen, Sainz topped the segment from Leclerc, Verstappen in third with Perez fourth, while a late lap from Hamilton not only knocked out Ricciardo but saw the Mercedes rise to fifth.

Qualifying 3 began with nine of the remaining 10 runners tiptoeing around to begin their first flying laps, Magnussen the odd man out given the Haas driver was condemned to start from the rear of the grid regardless.

Sainz shared his fate, though he had ventured out, working to give Leclerc a slipstream on the second part of the Mistral Straight.

Perez opened proceedings with a 1:31.640s, that effort standing only until Leclerc completed his lap, a 1:31.209s to take provisional pole.

Verstappen couldn’t beat that effort, the Dutchman 0.008s slower than his title rival.

Having given his team-mate a tow, Sainz returned to the pits without completing the lap where his car was prepared to repeat the process.

With four minutes remaining, the silence that had fallen across the Paul Ricard circuit was broken as cars returned to track, Magnussen again absent.

Ferrari again played the strategy it used earlier, sending Sainz out ahead of Leclerc to offer a slipstream on the second part of the Mistral Straight.

It netted results, the Monegasque improving to 1:30.872s to claim pole with his final flying lap, Verstappen unable to get within 0.3s of that time in second place.

Perez held on to third with Hamilton fourth, then came Norris from Russell, Alonso, and Tsunoda.

Officially, Sainz was classified ninth and Magnussen, who didn’t set a time, 10th, though both will fall to the rear, promoting Ricciardo and Ocon in their place.