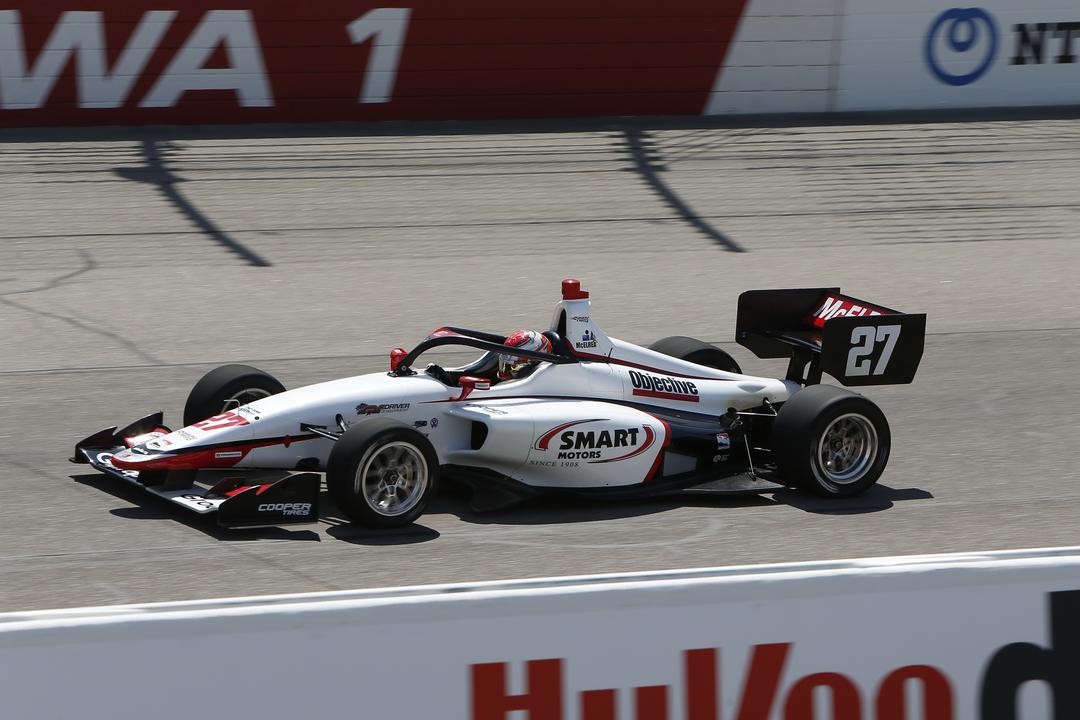 Hunter McElrea has been classified the winner of the Iowa Indy Lights race due to a penalty for series leader Linus Lundqvist.

The Swede was first to the chequered flag after 75 laps but copped a three-position penalty for avoidable contact in a battle for the lead which left Matt Brabham with front wing damage.

Brabham was officially third in an all-Andretti Autosport podium, with Christian Rasmussen splitting the Antipodeans.

McElrea qualified on pole and, after fending off a Lap 34 attack from Lundqvist (HMD Motorsports w/ Dale Coyne Racing), led all the way until the race restarted on Lap 51 after a Turn 2 crash for James Roe (TJ Speed Motorsports).

Lundqvist jumped the New Zealander at the green flag and then Brabham, who had already climbed five spots from eighth on the grid, passed his team-mate at Turn 3.

McElrea lost touch with the top two but Brabham was sticking with Lundqvist, almost making a pass at the end of Lap 68.

Three laps later, he got a run on Car #26 as they ran up the back straight, but Lundqvist moved over and made contact with Car #83 which also caused Brabham to touch the wall on drivers’ right.

Both pressed on but Brabham lost position to McElrea and Rasmussen as he limped to the finish line, with Lundqvist still under review.

He would eventually be slapped with a sanction which handed McElrea a second victory in a row, three weeks after the first of his career.

“Not the way I want to get it, obviously,” said the 2018 Australian Formula Ford title winner.

“I think, to be honest, Matt deserved that, but I’ll take it. Back-to-back… You’ll take what you can get in this game.”

McElrea is, however, keen to review what happened when he lost the lead at the restart.

“That restart, I don’t know what I did,” he admitted.

“I’ll have to look back, look at the footage and stuff. Really not good enough to get up in the marbles like that.”

McElrea is now up to second in the series standings, 77 points behind Lundqvist with five races to go, while Brabham is 17 points further back in fourth.

Race 10 of the season takes place at Nashville on August 5-7.