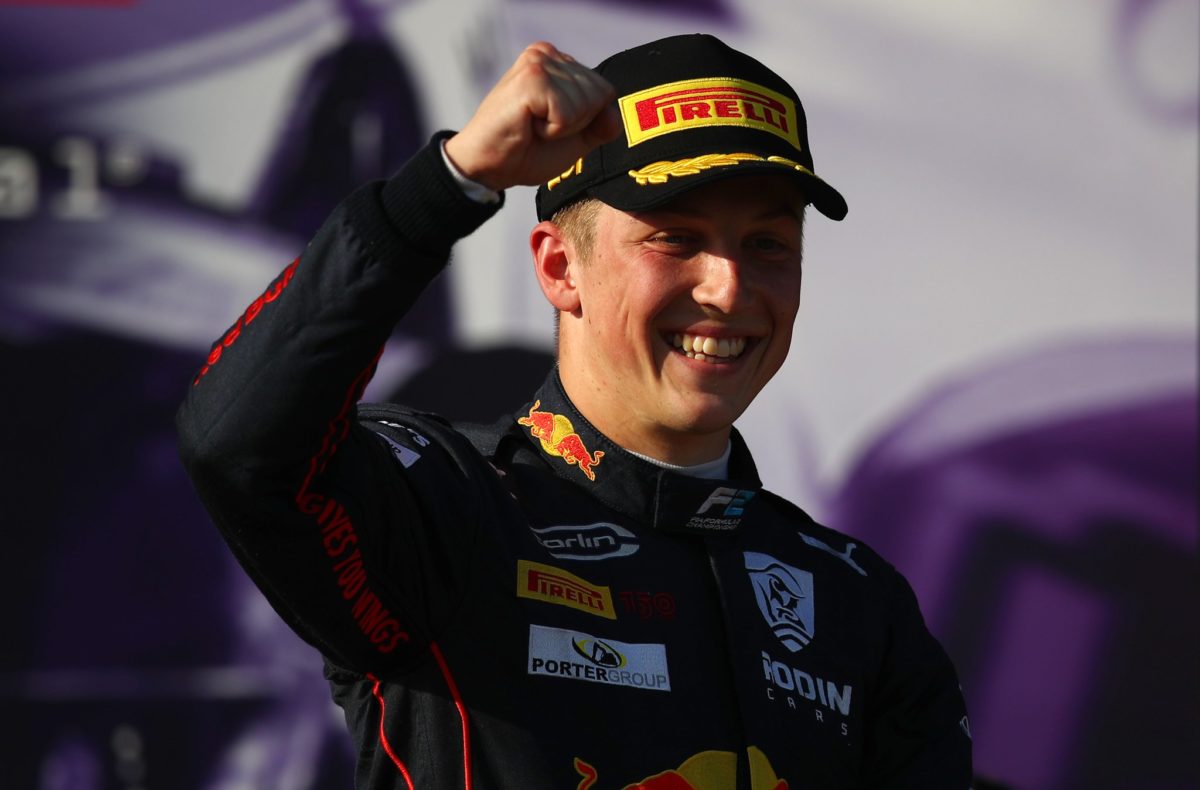 The Red Bull supported youngster chased down and passed pole-sitter Jehan Daruvala before opening a comfortable gap to take the flag with ease.

The Indian driver maintained second, while Theo Pourchaire saw the finish in third after a combative drive in the final laps that saw Marcus Armstrong fall from the podium to ninth.

Daruvala headed the field off the line, maintaining his advantage into the first corner over Armstrong and Lawson.

Behind them, the field spread out, Jack Doohan climbing a place to sit sixth by the time the field hit the Mistral Straight.

Armstrong was the fastest driver on track in the opening laps, sitting just inside DRS range by the time it was enabled as the field started its third tour.

The top four had edged clear of Felipe Drugovich in fifth, who in turn had a train of cars behind him, headed by Doohan.

A fierce battle developed for second as Lawson attacked Armstrong.

They ran wheel-to-wheel through the Turn 3-5 complex before Lawson found a way through at the chicane in the middle of the back straight on Lap 4.

Their squabble, which lasted little more than half a lap, was enough for Daruvala to extend a two second advantage out front.

It also saw Drugovich and the queue that followed him, which extended back to Ayumu Iwasa in 10th, join the battle for second.

Lawson had pace and inched away from Armstrong in third, cutting Daruvala’s lead by 0.3s on Lap 6. Two laps later, the lead had shrunk to less than a second.

Having stalled on the formation lap and started from the pit lane, a mistake from Enzo Fittipaldi saw him spin and draw the Safety Car.

The third-generation racer’s car had stopped in the chicane on the Mistral Straight, Amaury Cordeel tagging him on the way through to also become a retirement from the race with damaged suspension.

Calan Williams took the opportunity to pit, fitting a set of the soft compound tyres as he rejoined with 11 laps remaining.

Racing resumed at the start of Lap 13, the field running line astern as the green flags waved.

Drugovich was the key protagonist as it did so, the championship leader locking on to the back of Theo Pourchaire, though his advances were seen off by the Frenchman.

Lawson found his way into the lead on Lap 16, braking late into the chicane on the back straight to go around the outside of Daruvala.

He quickly built a small but handy lead as the former race leader fell into the clutches of Armstrong, Pourchaire, and Drugovich behind.

There was contact between Armstrong and Daruvala on Lap 19 at the chicane, dropping the Kiwi into the clutches of Pourchaire.

The Frenchman was initially unable to capitalise, only to dive underneath at De Bueausset in aggressive fashion.

Having slipped down to sixth, Armstrong was then attacked by Juri Vips at the final corner on the penultimate lap, which saw the Kiwi off the road and dropping out of the points.

Lawson was serene out front, enjoying a three-second advantage over Daruvala while Pourchaire held on to third, though the Alfa Romeo Sauber junior was under investigation for pushing Armstrong off track during their battle for the final podium spot.

Drugovich crossed the line fourth from Doohan, then Vips (also under investigation for forcing Armstrong off track), Frederik Vesti, and Ayumu Iwasa.

Armstrong fell to ninth at the chequered flag, outside of the points, while his mid-race tyre change saw Williams climb to 14th.

Formula 2 continues with the Feature Race at 17:35 AEST this evening.