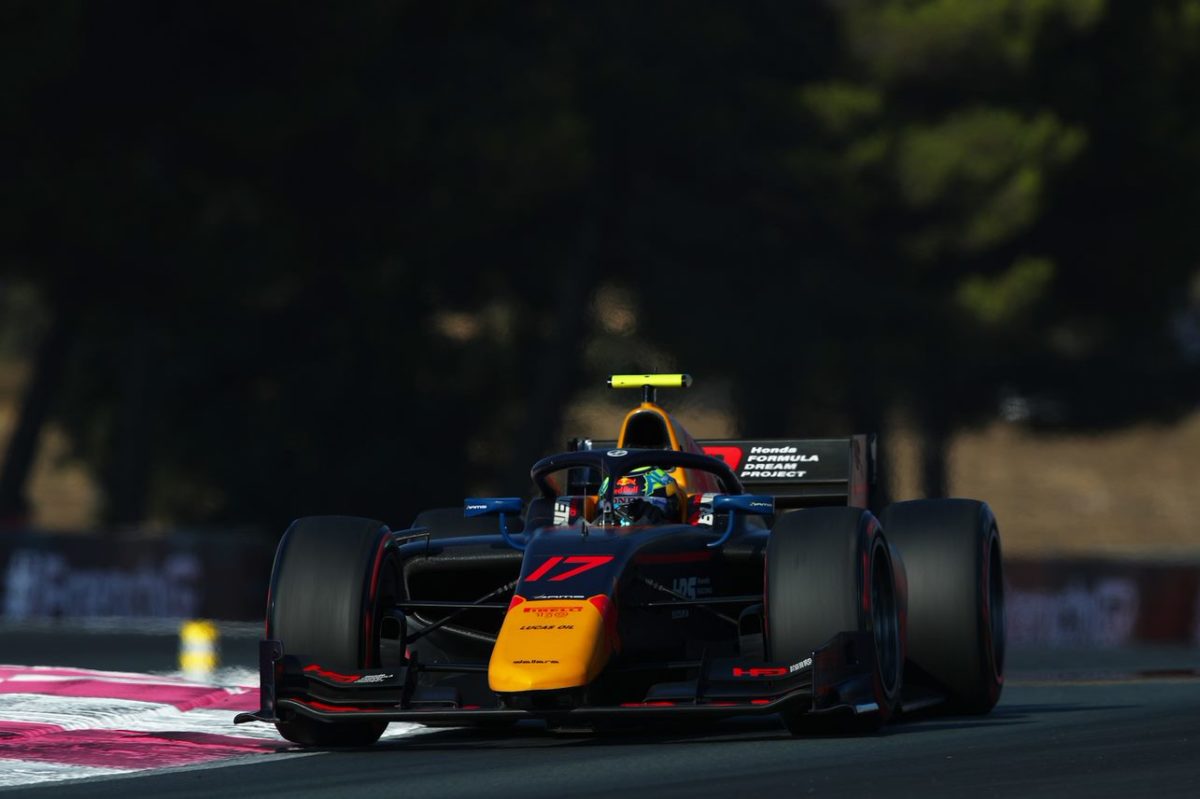 Ayumu Iwasa has claimed his maiden FIA Formula 2 race win with a dominant drive in the Feature race in Paul Ricard.

The Japanese driver held his nerve after losing out at the start to retake top spot half a lap later, going on to extend a sizeable advantage over Theo Pourchaire after 30 laps.

Frederik Vesti completed the podium while a spin for Jack Doohan left the Aussie fifth at the flag.

A strong start from Doohan saw him claim the lead from the second row by the first corner, Iwasa slotting into second as Logan Sargeant slipped from pole to third.

Half a lap later, Iwasa seized the lead by out-braking Doohan into the chicane on the Mistral Straight.

A tough weekend for Marcus Armstrong only got worse when he was involved in an incident on Lap 1, forcing him out and drawing the Safety Car.

Marino Sato was also stricken in a separate incident, while Dennis Hauger, who was innocently caught up with Armstrong, headed into the pits for a new front wing.

The Safety Car was withdrawn at the end of Lap 5, a lap short of the mandatory pit window opening.

That was good news for Felipe Drugovich, who sat seventh and was the first driver on the hard compound tyres.

Iwasa jumped early as the Safety Car peeled in, getting the drop on Doohan to hold more than a second advantage as they flashed across the line to start Lap 6.

Running second, Doohan was at competitive disadvantage approaching the pit stops as he battled radio issues with his team.

That saw Virtuosi revert to the use of a pit board to communicate with the Australian, robbing him of the ability to quickly react to the strategy of those around him.

Fifth-placed Theo Pourchaire was the first of the leaders in, stopping as the field began Lap 11.

Next time through, Sargeant headed in, only to lose the engine as he looked to exit his stall.

Refired, the American was unable to get going once again, his race ending on the spot.

Doohan stopped on Lap 14, swapping to the hard tyres, but his exit was momentarily delayed as Drugovich headed down the lane to move from the hard rubber onto the soft.

On cold tyres, Doohan emerged narrowly ahead of Pourchaire, the Australian powerless to defend as he lost out to the ART driver under brakes at Turn 3.

It was Iwasa’s turn to box next time by, the Japanese driver turned around in slick fashion as he fed in comfortably clear of the Pourchaire/Doohan battle.

Once the field was washed following the pit cycle, Iwasa enjoyed a more than four-second advantage out front while Pourchaire in second had Doohan stalking him with Frederik Vesti on his tail.

A move by Doohan into the chicane on the back straight on Lap 19 ended with a spin for the Virtuosi driver as he looked to put a move on Pourchaire.

He fell to fourth as a result of the mistake, his tyres scarred with flat spots after he locked the rears and bounced over the apex kerb.

Having managed his soft tyres in the early laps of the stint, Drugovich began reeling in Doohan in the closing stages.

What was a four-second gap had reduced to just l.5s as they began Lap 26 before, on Lap 27, Drugovich used DRS to make the move with ease as they ran down the Mistral Straight, Doohan offering nothing in the way of defence.

In the lead, Iwasa had extended a more than eight-second lead to win the race at a canter from Pourchaire, the Frenchman having a lonely run to the flag after seeing off Doohan.

Vesti held on to third from the fast-charging Drugovich, with Doohan holding on to fifth from Lawson after 30 laps of racing.

Formula 2 is in action again next weekend, supporting Formula 1 at the Hungarian Grand Prix from Friday.