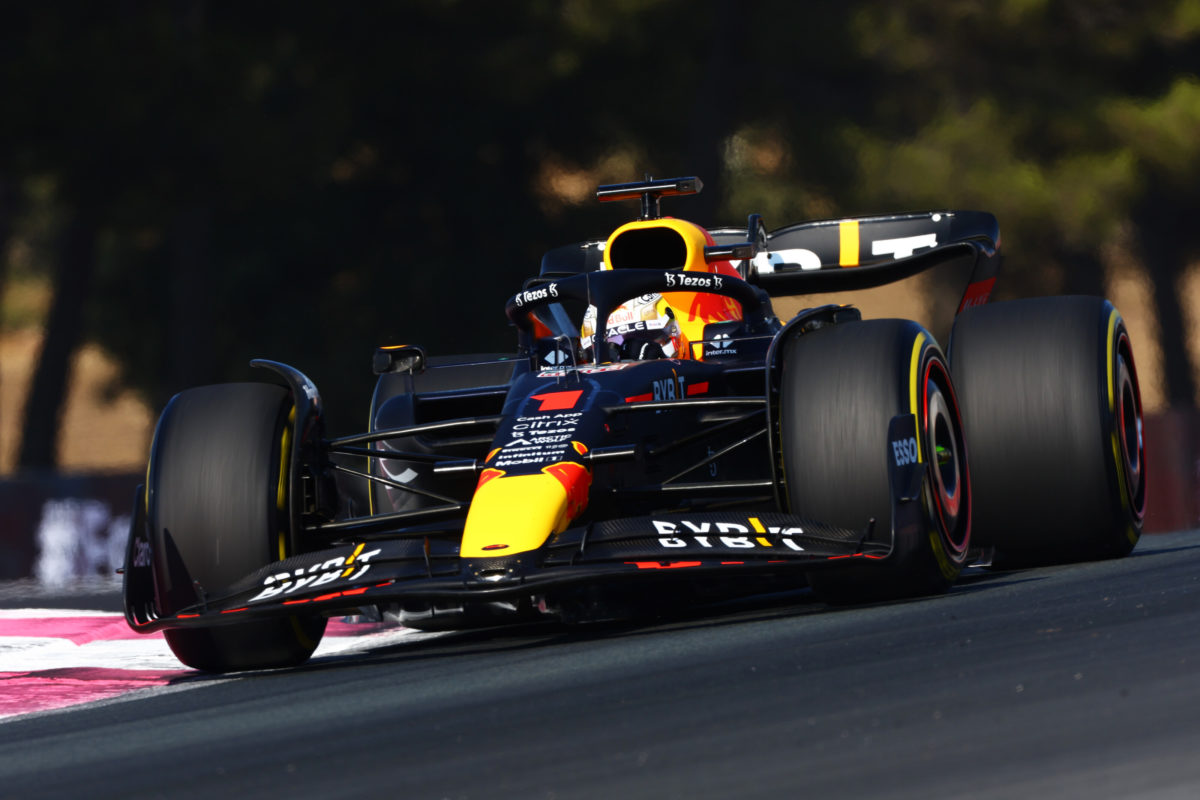 Max Verstappen has topped the final practice hit out ahead of qualifying for the Formula 1 French Grand Prix.

The Dutchman was comfortably clear of Carlos Sainz, who’ll start Sunday’s race from the rear of the grid owing to grid penalties, and Charles Leclerc in third.

Conditions had eased marginally from Friday, with the air temperature 28 degrees as the session began, and the track at 51 degrees.

As has become the norm, it was a slow start with only half a dozen runners heading out in the opening minutes.

The two Aston Martin’s did nothing more than an installation lap, while Sergio Perez carried on, a set of medium tyres fitted to his Red Bull.

That resulted in a 1:33.628s, about a second off the pace managed by Carlos Sainz on Friday afternoon.

Verstappen was also among those out early, the Dutchman too on the medium tyres, recording a 1:32.837s.

Perez completed a five lap stint before heading back into the pits, his best leaving him second fastest and 0.4s away from his team-mate who operated to the same run plan.

Ferrari was in no rush to head out, with both Leclerc and Sainz remaining in the pits until the 15-minute marker.

The former had the hard compound tyres bolted on, versus the mediums for his Spanish team-mate.

Sainz quickly rose to second fastest, splitting the two Red Bulls with a 1:33.217s, while Leclerc went seventh fastest with a 1:34.233s.

The Monegasque then had a moment at Turn 12, spinning off track and flat spotting his tyres before returning to the pits.

Valtteri Bottas had sat fourth fastest for much of the first 30 minutes of the session, only to be replaced by Pierre Gasly in the Scuderia AlphaTauri.

The Frenchman recorded a 1:33.869s on a set of the soft compound tyres.

Daniel Ricciardo was slowest of the 20 runners to that point, the Australian improving on his previous best with a 1:35.143s, though that left him at the foot of the timesheets.

The time was lost in the final third of the lap, the McLaren driver having set two personal best sectors to that point.

Switching to a set of soft tyres approaching the final 20 minutes, Lewis Hamilton improved to third best with a 1:33.255s.

It triggered a number of quicker laps, Leclerc improving to 1:32.909s and Sainz to 1:33.172s, though Verstappen remained clear at the top of the timesheets despite not completing a soft tyre run.

On his qualifying simulation, Ricciardo improved to a 1:33.788s, a time comparable to the 1:33.669s set by team-mate Lando Norris.

If left the McLaren duo in eighth and 10th respectively, Yuki Tsunoda sandwiched between them.

Sainz then went fastest with a 1:32.626s, the Spaniard pulling into the lane as Verstappen began his qualifying simulation.

The Dutchman promptly went fastest, recording a 1:32.272s despite a comparatively steady opening third of the lap.

Hamilton remained fourth behind the two Ferraris, then came Perez who was 1.033s down on his team-mate out front.

In the final minutes, Alonso rose to seventh fastest, one spot ahead of the improved Williams of Alex Albon.

Damage to the floor on his Aston Martin kept Sebastian Vettel in the garage, the German failing to set a qualifying simulation to languish 2.2s off the outright pace in 20th, one spot back from team-mate Lance Stroll.

Inside the final minute of the session, Verstappen began a final flying effort, though he lost time as the lap continued.

He then encountered Mick Schumacher at the final corner, compromising his lap to ultimately log a 1:33.915s.

Even still, he ended the session 0.3s clear of Sainz, then Leclerc, Hamilton, and Perez.

Qualifying is up next, beginning at midnight.