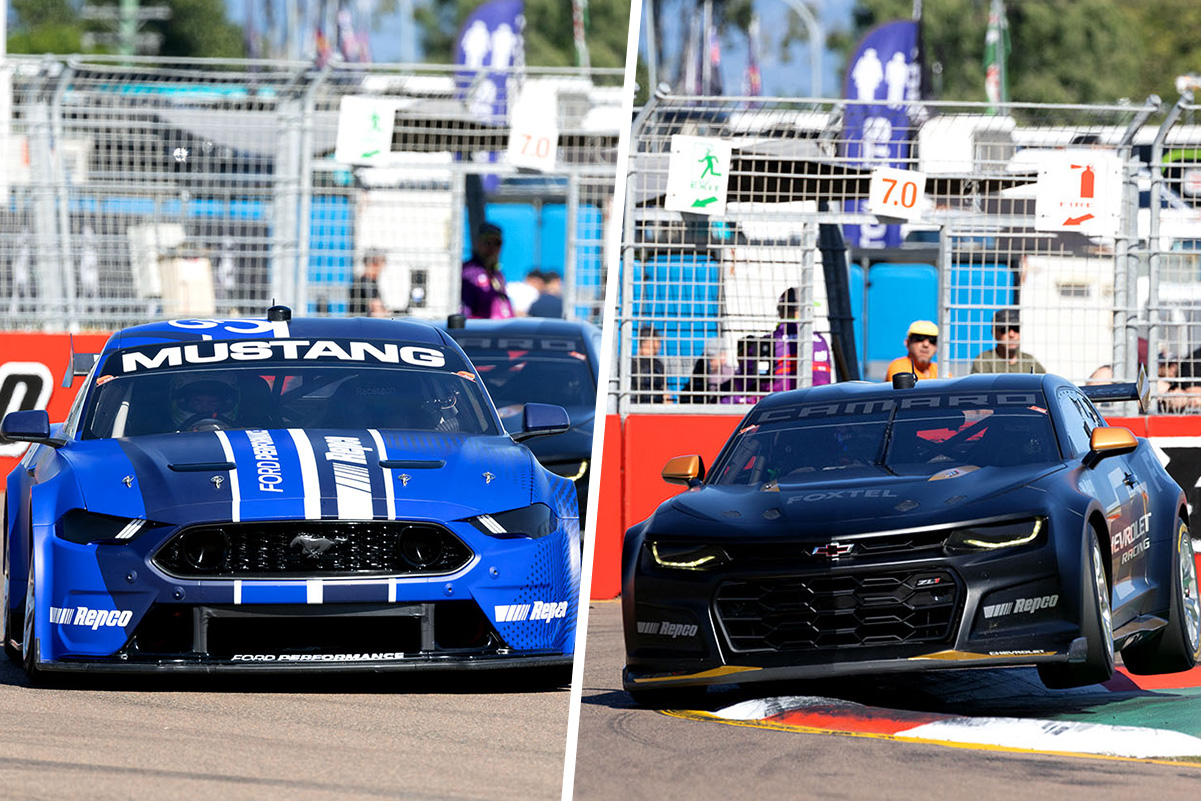 The Gen3 Mustang and Camaro at Townsville

The Gen3 Supercars chassis is going through a late redesign process as part of multiple project revisions.

Development of the Gen3 Chevrolet Camaro and Ford Mustang has been progressing ahead of their introduction into Repco Supercars Championship competition in March 2023.

A redesign process is currently taking place on the control Gen3 chassis which forms the base of both the Camaro and Mustang that will compete next season.

Revisions are being made to a number of components, the most significant of which is a width increase to the engine bay.

While the wheelbase and outside of the car will not be any different, more space has been made to the area in which the General Motors (5.7-litre) and Ford (5.4-litre Coyote) powerplants will be housed.

That is to accommodate a request, made early in the project, to improve the space teams have to work with in the engine bay of the Gen3 cars.

Speedcafe.com understands that the width increase is part of a list of revisions to the front end, making the process of expanding the engine bay viable at this point in the project.

Triple Eight Race Engineering, the GM homologation team, has been leading the charge on behalf of Supercars on the Computer-Aided Design (CAD) of the category’s new cars.

Team boss, Jamie Whincup, shed light on the redesign of the control chassis, which is nearing completion in what will be its latest iteration.

“It’s actually just the chassis, so the front clip underneath all the bodywork,” Whincup told Speedcafe.com of the revision.

“So the wheelbase, and the width of the car will be exactly the same on the outside, just the inside, underneath the bodywork, we have what we call the front clip, which forms part of the chassis.

“We’re just finishing that design now for the category.

“And it is going to be a little bit wider than it originally was to give the engine a little bit more room to be able to put in and out.”

While the redesign comes late in the game, it’s an indication of the lengths Supercars is going to in order to get Gen3 as close to the ideal product as possible.

It was revealed yesterday that set-up changes will be far simpler than originally envisaged with a ‘reinvention’ of the front-end to allow greater adjustability.

Whincup explained the late redesign is a best of both worlds scenario in getting Gen3 right from the start.

“So they came early in the piece to say, ‘oh, we’d like a bit more room here’,” Whincup added.

“And then we went, ‘okay, but the front end is already designed’, but then we’re like, ‘hang on…now we need to change it [anyway] [because] we want adjustable roll bars.

“Now we want all these other things. Okay, let’s go and redesign the front end and while we’re doing that, yeah, let’s accommodate [the] request to have a little bit more room.

“Why wouldn’t you do that? We’ve just made the design better; so that’s how the whole process occurred.

“And yeah, it’s late, but we’re going to end up with a better car for the design change.

“So I’d rather redesign it, which we are doing now and have a better thing rollout next year than not [and instead] just have a little bit more time to manufacture.”

Prototypes of the Gen3 Camaro and Mustang have been out in public, most recently at the NTI Townsville 500, though those versions are early builds of the cars.

Gen3 has been allocated more track time at The Bend Motorsport Park as part of the OTR SuperSprint from July 29-31.