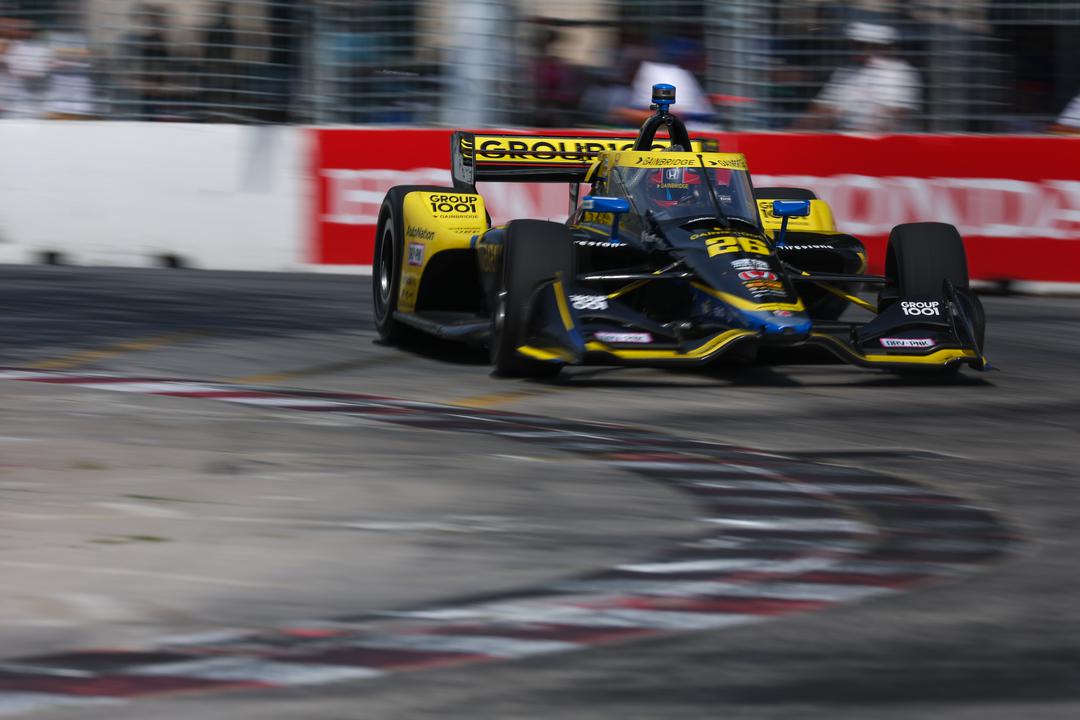 Colton Herta believes that pitting behind Scott McLaughlin may well have cost him victory in the Toronto IndyCar race.

The #26 Andretti Autosport driver finished second after 85 laps of racing, but had qualified on pole position and held first spot until his initial pit stop at the end of Lap 18.

McLaughlin followed Herta in and pulled into his box, which is immediately ahead of that of Car #26 on the left-hand bend in the tight Exhibition Place pit lane.

Car #3 proved an obstacle for the erstwhile leader and while he still exited the pits in front of another New Zealander in Scott Dixon, it was not by far enough to prevent the Chip Ganassi Racing driver from passing him as soon as they reached the braking zone at Turn 1.

Dixon had trailed by about 1.8s when he pitted a lap prior to the American, and would retain the effective lead for the remaining 67 laps of the contest.

“I don’t know what happened with Dixon, so I can’t really say if this was the definitive thing, but I had Felix’s [Rosenqvist] guys set up when I was coming in, the box right in front of me, and then I have Scott McLaughlin right in front of me coming out,” recounted Herta.

“It’s a 30-foot box [Actually 35 feet]; we’re really jammed in here at this track. It’s almost too short, it’s really hard; what are you going to do, though?

“So yeah, that was that was the main reason why we lost on… Because, I felt the in lap was quite good, that was fine; seemed just as fast as we normally do, so we shouldn’t have lost any time on it.

“But yeah, with that in and out with cars in front of us, it was really killer.”

Herta felt that, had he maintained track position relative to Dixon, he could have held off Car #9, as he did with Car #7 when he came under late-race pressure from Felix Rosenqvist.

That battle had its challenges too, with the hirsute 22-year-old revealing that he finished the contest with hair in his face after his balaclava broke.

“I couldn’t really see much because my headstock broke in front of my face,” quipped Herta, post-race.

“I couldn’t see; I was having to look out the sides of my visor instead of in front,” he added.

Herta will take steps to prevent a repeat of the issue, although trimming his hair will not be one of them.

“This head sock that I have has to hold back a lot of hair so I can understand why it broke,” he admitted.

“It’s the first time I’ve ever actually seen that or heard of that; I might go for the Felix trim next week…

“But no, I’ve never actually seen that or really heard of anything like that happening, so I don’t know if I just put that thing to good use, or maybe there were some signs of wear and tear beforehand that I didn’t see.

“But for sure, now I’m just going to be wearing a brand-new one every time I race because I can’t leave anything up like that.”

On a haircut, Herta declared, “That would also solve some things, but I’m not gonna.”

The second place in Toronto moves the American up two spots to eighth in the series standings, albeit 97 points or almost two full races behind leader Marcus Ericsson.