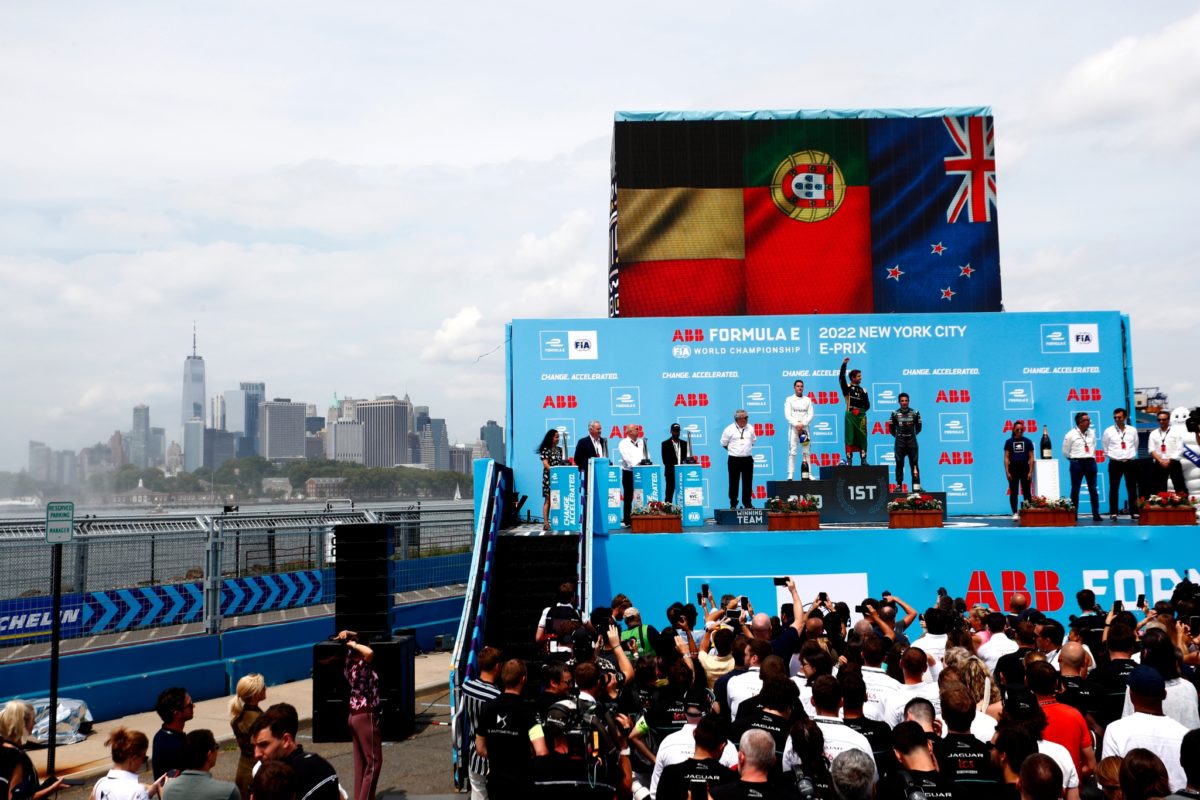 New Zealander Mitch Evans remains in contention for the Formula E championship title, after finishing on the podium in the second race of the New York City ePrix double-header.

Portuguese driver António Félix da Costa claimed a lights-to-flag win in the second race of the weekend, with Stoffel Vandoorne and Evans rounding out the podium.

While racing alongside Nyck de Vries, Evans ended up sideways,  dropping him down to fifth, before he fought back for silverware.

WHAT. A. SAVE. 😮‍💨@mitchevans_ catches a bump and almost spins!

Evans described his podium as a ‘back against the wall’ effort.

“There was the time I got the pothole and the car went, and I thought that’s it we are over,” Evans said.

“Before that I thought it was a pretty cheap move from Nyck to try and overtake me, obviously he is trying to help his team-mate but it was one of those moves where I had to get out of the way or we make contact, and he obviously hits Alexander [Sims] as well.

“Anyway it is the way it is, it is all strategy and tactics at the end of the day, but its not really my taste but even after that I am pretty sure the car was damaged after the big moment, and I thought I was out to be honest.”

The Jaguar TCS Racing driver believed he had the speed to win the race.

“The pace was good, and without Nyck sticking up the inside of me I thought we would have won,” Evans claimed.

“It is all part of the game, when you play your next move, sometimes it comes continuously but sometimes you need to wind it up for a few laps.

“Alexander was quick in quali, he got me in the Duels, and fairplay to them they were strong in the race and held their own.

“We had a really good pace, unfortunately the win slipped away from us, but the pace was strong, and that is encouraging.”

The result sees third-placed Evans close in on Edoardo Mortara in the championship standings, after Mortara crossed the line in 10th place, with five points now separating the pair.

Vandoorne’s second place sees him return to the top of the championship standings on 155 points.

The double-header caps off a successful weekend for the two Kiwis competing in Formula E, with Nick Cassidy securing his first Formula E win, in the opening race of the ePrix.

The Envision Racing driver is 11th in the championship standings on 47 points.

Formula E will take to the track for another double-header before the end of the month, with the London ePrix to take place from July 30-31.

Every Formula E round is shown live and ad-free on Stan Sport.