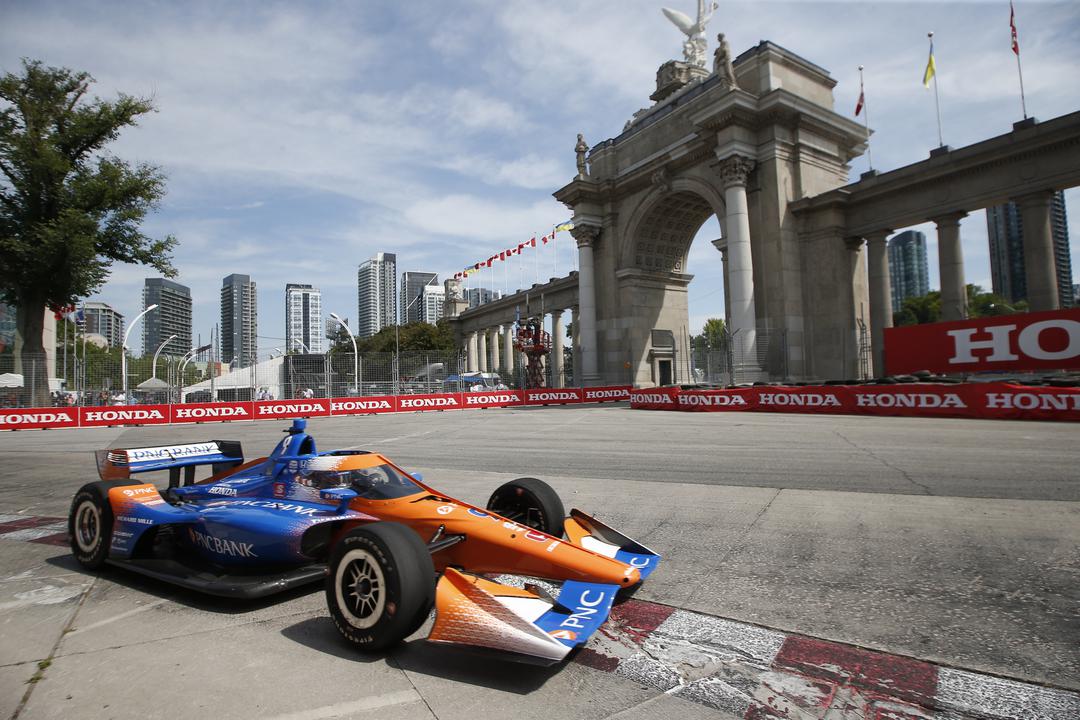 Chip Ganassi Racing’s Scott Dixon has his first win of the 2022 IndyCar season after prevailing in Toronto.

The decisive moment came when the New Zealander went down the inside of Colton Herta as the pole-sitter came up to speed just after his first pit stop, and the #9 Honda would not be headed, in effective terms, thereafter.

Scott McLaughlin got home in ninth, running as high as fourth before a costly restart, but Team Penske team-mate Will Power’s early forward progress was all but wiped out before he took the chequered flag in 15th, one spot above where he started.

Power remains second in the series, now 35 points behind Ericsson and two ahead of Palou.

When the field took the green for the first of 85 laps, Herta headed Dixon and Josef Newgarden (Team Penske) through the opening corners, the latter holding off an eager Alexander Rossi (Andretti Autosport).

Takuma Sato (DCR w/ RWR) hit the wall at Turn 2 in a squeeze with Pato O’Ward (McLaren SP) and Helio Castroneves (Meyer Shank Racing), and while he drove back to the pits with a broken left-front corner, a Caution was called on Lap 2 for debris.

The Lap 5 restart saw Rosenqvist lunge past Malukas for sixth at Turn 1, while Romain Grosjean (Andretti) regained a position when he dived past Power for 12th on Lap 11 at Turn 3.

The Queenslander had also ceded 13th to Graham Rahal (Rahal Letterman Lanigan Racing) when he was among the earliest to pit, on Lap 12, making the switch from alternate tyres to primaries given he, the top 13 qualifiers, and several others had started on reds.

Dixon made his first stop on Lap 17 from 1.8s behind Herta but when the latter came in on Lap 18, he was followed by McLaughlin and hence had to drive around the #3 Chevrolet in the box immediately ahead.

That was presumably a factor in him losing position to Dixon at Turn 1 once he came out of the pits, representing an effective lead change.

Up front, some of the black tyre starters were running long, with O’Ward passing Rinus VeeKay (Ed Carpenter Racing) for first spot on Lap 29 at Turn 3.

The latter stayed out until Lap 32, at which point Dixon became the official leader for the first time, with a margin of 2.5s over Herta.

Alex Palou (Ganassi) was 10th from 22nd on the grid and Rahal 11th after going long before a switch toreds, but Power had slipped to 17th, having been held up by Devlin DeFrancesco (Andretti) after the latter’s stop.

When Daly pitted a second time on Lap 36, Newgarden was 16 seconds behind Dixon, and the Kiwi’s margins to the rest of the top three were still much the same when another Caution came on Lap 45 due to a flashpoint in the battle for fourth position.

Rossi had crunched the wall at Turn 3 after Rosenqvist went down his inside and made wheel-to-wheel contact, although stewards would opt to take no further action.

The ECR cars stayed out, VeeKay and Daly assuming the top two positions despite the former still only having made one stop, but everyone else pitted when the lane opened.

Dixon retained the effective lead by resuming in third, on new black tyres, from Herta, and Rosenqvist.

McLaughlin was back up to an effective fourth/official sixth, ahead of Rahal, Simon Pagenaud (MSR), Ericsson, and Palou, with Newgarden in 11th after an issue on his right-rear wheel and Power in 15th.

Newgarden lost three more positions when he found the marbles as he came onto the back straight when the race restarted on Lap 50, while Herta was pressuring Dixon.

A third Caution came on Lap 55 for debris, specifically some track break-up, with Daly pitting from second and Grosjean rolling the dice on a switch back to reds.

Green flags flew again on Lap 59 and Palou nearly spun team-mate Ericsson in the battle for eighth, effectively seventh position, when they touched at Turn 5.

At the Lap 67 restart, Rahal fired down the inside of McLaughlin at Turn 1, leaving Car #3 hung out to dry on the marbles.

McLaughlin plummeted to ninth by the time they got down the back straight to Turn 3, before Pagenaud was passed by Ericsson for fifth at Turn 5 and by Palou for sixth at Turn 8.

Dixon, meanwhile, had skipped to almost two seconds clear of Herta in five laps, and that was about where the margin stabilised for several laps more.

Herta had Rosenqvist to worry about in his mirrors, and was still 2.0s behind the Car #9 when they took the white flag, before Dixon cruised to victory by an official margin of 0.8106s.

Half a second separated Cars #26 and #7 in the battle for the minor podium placings, with Rahal fourth, from Ericsson, Palou, Pagenaud, Lundgaard, McLaughlin, and Newgarden in 10th, while VeeKay took 13th and Grosjean 16th.

Johnson eventually retreated to the pits after the hit with Kirkwood, whose ‘out of race’ penalty for avoidable contact was academic, while Dalton Kellett (AJ Foyt) was already on the sidelines with an apparent engine failure.