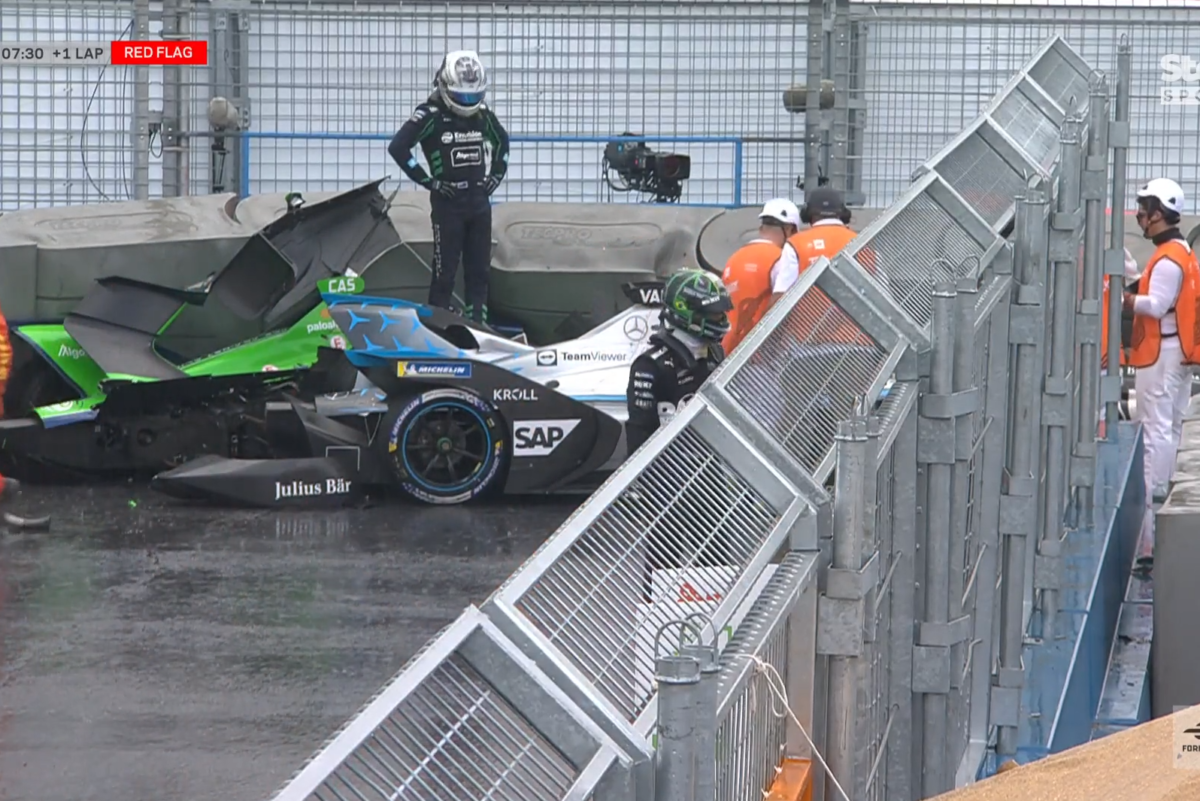 New Zealander Nick Cassidy has his first Formula E win despite crashing out as rain fell in the opening race of the New York City E-Prix.

The Envision driver qualified on pole position and had effectively led all the way, dropping behind only briefly during the two Attack Mode cycles, before the heavens opened at the Brooklyn Street Circuit.

Cassidy hit standing water at Turn 6, careering into the barriers at high speed, and he was followed in there by Lucas di Grassi and Stoffel Vandoorne, who had been running second and fourth respectively.

Between that and a pile-up just around the corner, a Full Course Yellow (FCY) was quickly upgraded to a red flag, and the contest would not restart.

With the classification backdated to the end of Lap 29, Cassidy was declared the winner, from Venturi’s di Grassi and Robin Frijns in the other Envision entry, which had inherited the lead due to the carnage at Turn 6.

Back at the beginning, the Kiwi in Car #37 got the jump on Mercedes-EQ’s Vandoorne, who would be passed by di Grassi and Nissan e.dam’s Sebastien Buemi through the opening corners.

Before Lap 1 was done, championship contender Jean-Eric Vergne (DS Techeetah) half-spun thanks to contact from New Zealander Mitch Evans (Jaguar), who had been pushed into the collision as the pack concertinaed.

The front-runners were as you were until Cassidy took Attack Mode on Lap 7, but he was back at the head of the field when di Grassi too took the long way around the Turn 10 hairpin for his first 30kW boost of power.

Buemi was back in third while Frijns had assumed fourth, one position ahead of Vandoorne.

The latter passed Frijns on Lap 10, recovered another position through the second Attack Mode cycle by jumping Buemi, and then used his Fanboost to put a move on di Grassi as they arrived at Turn 6 on Lap 24.

However, di Grassi wrested second spot back from Vandoorne at Turn 1 on Lap 28, making room from Frijns to follow him through.

That was the provisional podium when the rain hit, and how they would finally be classified, with Vandoorne officially fourth.

Championship leader Edoardo Mortara had an eventful race in the #48 Venturi entry which would eventually be classified ninth.

That was the same position in which the Swiss driver had qualified and he struggled to make progress initially, but got down the inside of Buemi for fifth position at the start of Lap 29.

Mortara also aquaplaned into a wall when conditions seriously deteriorated with about eight minutes to go and while he still emerged in second spot after all of that, the backdating of the order put him back to fifth, before a five-second time penalty for speeding under FCY cost him four more positions.

At the top of the drivers’ standings, Mortara’s advantage is a reduced five points over Vandoorne, who has overtaken Vergne for second given the Frenchman finished outside the points in 18th.

Evans remains fourth but is now 18 points away from the summit after also failing to score given he was classified 11th, while Venturi’s teams’ championship lead has grown to 12 points, with Mercedes-EQ up to second.

Race 12 of the season takes place tomorrow morning (AEST), with Stan Sport’s live and ad-free coverage resuming tonight at 20:55 AEST, in time for Practice 3 of the event.