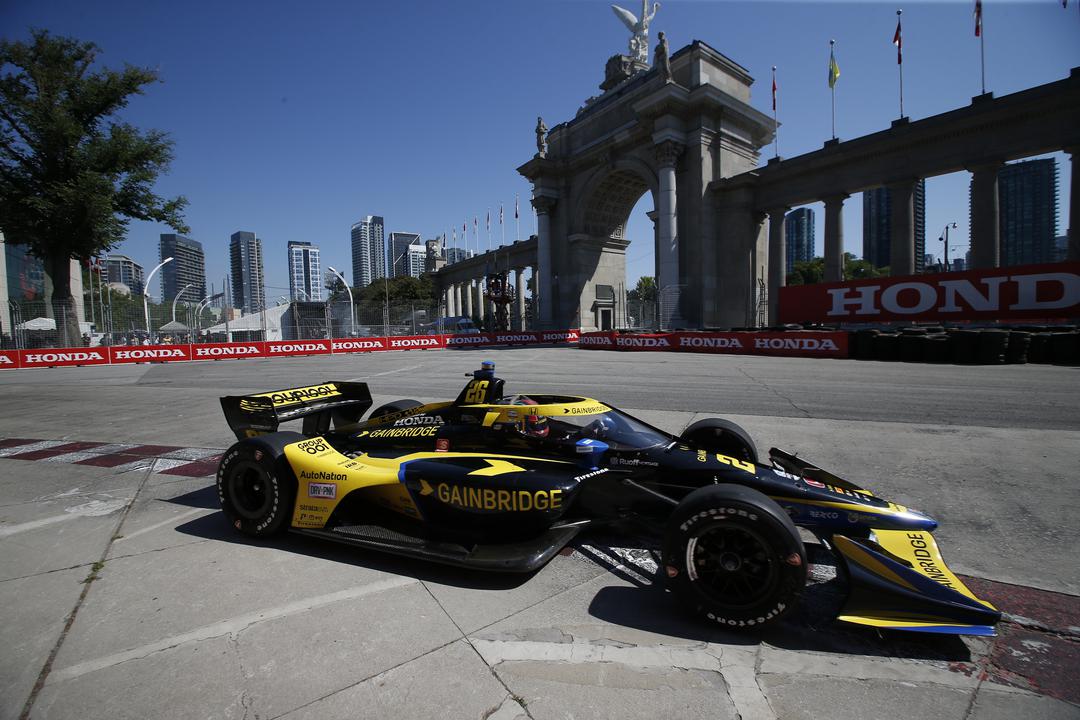 Colton Herta has taken pole position for the Toronto IndyCar race while Will Power will line up 16th on the starting grid thanks to a Qualifying crash for Kyle Kirkwood.

In fact, the only two Chevrolet-powered cars to make the Fast Six were Team Penske team-mates Josef Newgarden and Scott McLaughlin, who would claim third and sixth respectively.

Alex Palou, the 2021 champion who has been the centre of attention due to his contract mess, made more headlines when he qualified only 22nd.

It had already been a frustrating day for Palou given he crashed in Practice 2 when he pinballed between the walls at Turn 1, before his Honda engine became “dead”, in the words of the Spaniard himself over the radio, early in Qualifying.

The Fast Six started with everyone setting at least one lap on their first run, all on used alternate compound tyres.

Alexander Rossi (Andretti Autosport) banked a 0:59.6090s while Dixon took up second with a 0:59.6402s on his second flying lap, before returning to pit lane.

When everyone came back out, on more red tyres, Newgarden went quickest on a 0:59.5257s despite swiping the wall exiting Turn 6, while Rossi improved his time but not his position with a subsequent 0:59.5544s.

Herta sat fifth when the chequered flag came out but managed to string together a 0:59.2698s to jump to first position, with Dixon then also climbing from Row 3 to Row 1 when he clocked a 0:59.3592s.

McLaughlin did not go quicker at the end and will start sixth courtesy of a 0:59.9558s.

Back in Round 2 of Qualifying, Rossi set the pace on a late 0:59.3709s while McLaughlin was vulnerable when the chequered flag came out given he was only sixth-quickest on a 0:59.5876s at that point.

Below him on the timing screen was series leader Marcus Ericsson (Ganassi) but the Swede found no improvement, saving McLaughlin and leaving the #8 Honda ninth on the starting grid all told.

Devlin DeFrancesco finished 12th in the #29 Andretti entry after copping a penalty which saw him lost his two fastest laps and be denied an advance to the Fast Six.

Pato O’Ward (McLaren SP) will start 15th after glancing the wall exiting Turn 8 on his way to eighth in the 10-minute stanza and Takuma Sato (Dale Coyne Racing w/ RWR), who crashed in Practice 2 at Turn 6, will be two rows further back.

Group 2 featured two red flags, the first for Palou’s engine drama towards the end of the first runs which coincided with DeFrancesco nosing into the tyre wall at Turn 3.

The Canadian had pinched the inside-front and appeared to have a moment of indecision about whether to give up the corner or try and make the turn.

He nevertheless apparently kept the engine running and drove away, meaning Palou got the blame for the stoppage, before drivers were released for an out lap and a single flyer to end the session.

With the red tyres taking some time to come up to temperature, however, few improved, and Power lost any chance to do so when it all went sour for Kirkwood.

The rookie glanced the wall at Turn 6 on his hot lap and the left-rear held up until he arrived at the tight Turn 8 right-hander, tipping him into a spin.

The #14 AJ Foyt Racing entry swiped the tyre wall before coming to rest with a damaged rear wing, triggering another red flag.

Power thus got stuck in the eighth position in the group which he held at the time of the Palou stoppage, and the #9 Ganassi car was consigned to Row 11 once it lost its two fastest laps and a number of other drivers were sanctioned for various incidents.