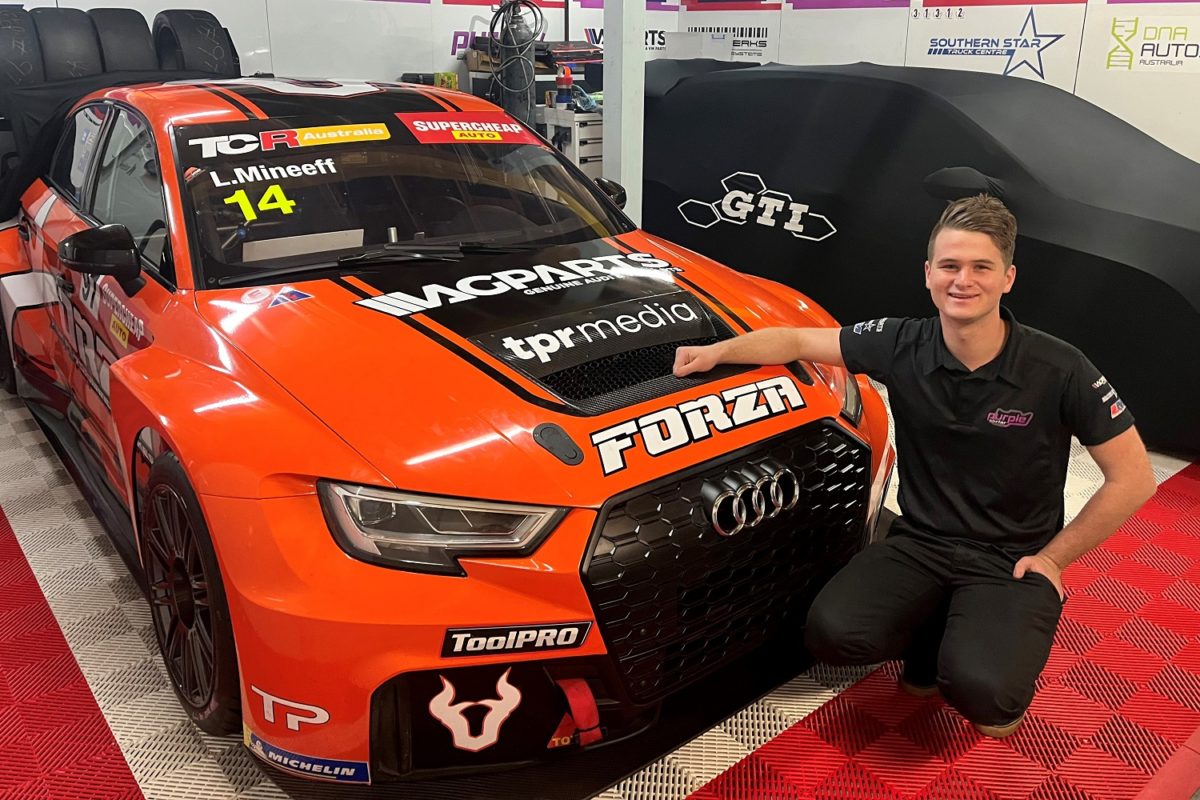 Lachlan Mineeff with the newly-acquired Audi

Supercheap Auto TCR Australia Series privateer Lachlan Mineeff has switched from Volkswagen to Audi machinery ahead next month’s round at Queensland Raceway.

The Purple Sector team has bought the ex-Liam McAdam RS 3 LMS TCR, having fielded Mineeff in a Golf GTI TCR since his TCR debut at Phillip Island last year.

The Audi in question has good history, having been driven to the marque’s first Supercheap Auto TCR Australia race win by Garth Tander at The Bend in 2019, then to pole and another victory by Jean-Karl Vernay at Queensland Raceway later that year.

“We’re just really excited to be able to have a proper crack at TCR in a model that is very capable of winning races and that’s what we’re setting out to achieve,” explained Mineeff.

“I don’t think we’ll be winning straight away, but if we can have the progression of being top 10, top five, podium, then number one, that’s the idea and continue to move forward.

“The Audis historically in TCR Australia have done really well, they had many wins during the inaugural season including this very car in the hands of Jean-Karl Vernay at Queensland Raceway.

“Vernay was able to achieve pole and win the first race, but also when you reflect on what Chaz [Mostert, 2021 series winner in an RS 3] was able to do last year during the series, which gives us pretty good confidence with what we might be able to do with this Audi.”

Purple Sector will get to test before the trip to Ipswich, and there will also be the added familiarity thanks to the RS 3 and Golf both coming from the Volkswagen Audi Group family.

“It is the very top spec it can be for this generation, so we’re obviously very excited to sink our teeth into it,” added Mineeff.

“There are definitely a lot of common parts and similarities shared with the Golf, so I think it will be great for the team as well as myself to be able to quickly transition between the two.

“I haven’t driven the car yet. I’ve just loaded on and taken it off the truck.

“We’ll definitely get a test day in either way before Queensland Raceway, which will be really good.”

Purple Sector is looking to lease the Golf, with Mineeff remarking, “We still own the Golf and I think it would be great to continue to run it as a customer entry at rounds this year.

“Last year, we were able to show with a new team and rookie driver we’ve been able to get some really good results.

“If we can find a customer who wants to experience TCR for the first time and gets some laps under their belt, the Golf is perfect.

“It’s reliable and a great way of getting some laps under your belt.”

Forza Brakes Motorsport has come onboard as a major backer of the team for the remainder of the season, joining VAG Parts Australia, Equipment Dynamics, AutoInstruct, and Eibach Australia.

Round 5 of the Supercheap Auto TCR Australia Series takes place as part of the Shannons Motorsport Australia Championships in Ipswich on August 5-7.

That event can be seen live and ad-free on Stan Sport.