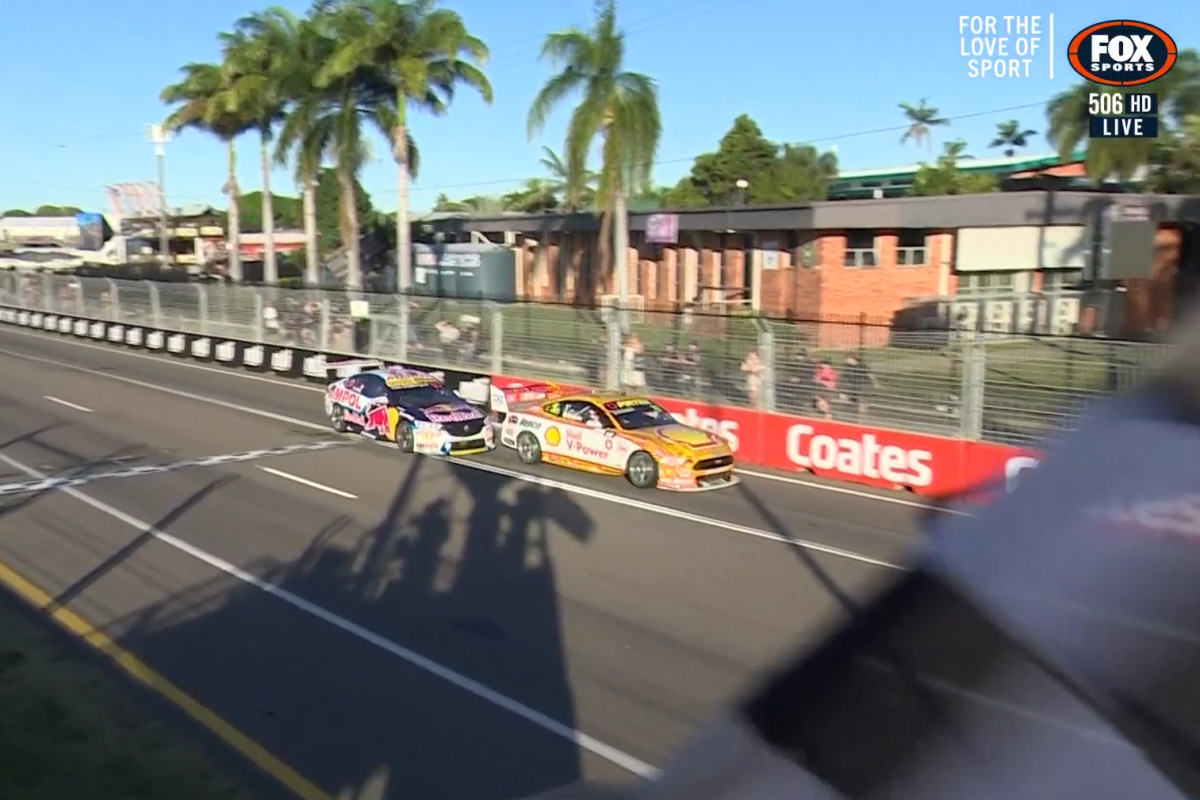 Anton De Pasquale had already caused a spectacular end to the NTI Townsville 500 when Shane van Gisbergen made it that much more remarkable.

In this week’s Pirtek Poll, we ask if you think a driver who attempts to redress should then escape penalty if it is not taken up by the aggrieved party.

De Pasquale had hunted down van Gisbergen in the final stint and decided to have a dive at the final corner of Race 20 of the Repco Supercars Championship.

However, the Shell V-Power Racing Team driver pinched a brake and rather than making a clean enough pass, he hit Car #97 just in front of its left-rear wheel, causing the Red Bull Ampol Racing entry to rotate.

De Pasquale was then told over his radio to redress as he ran along Boundary Street, and he did indeed attempt to do so.

van Gisbergen reacted by himself slowing such that he crossed the finish line behind Car #11, effectively forcing stewards to issue a penalty for the spin.

The magnitude of that sanction, for Careless Driving, was only five seconds, the effect of which was to restore the top two positions to where they had been before the incident given third-placed Cameron Waters took the chequered flag 6.6s behind De Pasquale.

van Gisbergen was winning the race, redress or not, but eventually confirmed that he was hoping for a bigger penalty than what was ultimately issued.

His now former boss, Roland Dane, has often spoken of just how intelligent the New Zealander is as a race car driver, and the split-second decision to try and really punish his nearest rival in the championship was, arguably, quite brilliant.

De Pasquale himself had “no concern” with the cheeky ploy, and did not go along with the suggestion that a penalty should not be issued if a redress is offered but not taken up by the driver on the rough end of the incident.

Redresses are entirely voluntary, and this one could have neatly occurred given how far back Waters was from the top two.

So, should it have been the end of the matter once the Dick Johnson Racing driver made his attempt to right a wrong?

What should also be considered in all of this is that there is not a single standard penalty for Careless Driving.

In previous instances this season, that breach of driving standards has been punished at times by 15-second penalties, but those incidents caused the aggrieved driver to lose multiple positions, rather than the one that van Gisbergen lost.

van Gisbergen himself, for example, copped 15 seconds for running into De Pasquale’s team-mate, Will Davison, in the last race of the previous event of the season at Hidden Valley.

The relevant excerpt of the stewards report read, “A 15 Second Time Penalty for Car 97, Shane van Gisbergen, for Careless Driving after Car 97 made contact with the rear of Car 17, Will Davison, at the entry to Turn 1 on Lap 31 and then made further contact with Car 17 pushing Car 17 off the Race Track whereupon it lost multiple positions.”

At Townsville, stewards advised, “A 5 Second Time Penalty on Car 11, Anton de Pasquale, for a breach of Schedule B2, Article 2.1.1 (Careless Driving) contact with Car 97, Shane van Gisbergen, at Turn 13 on Lap 88.”

In this case, believes De Pasquale himself, the fair outcome came to pass; van Gisbergen was first and him second on the way into the corner, and that was how they would be officially classified.

“I tried to give him a position back [but if] he doesn’t want to take it, that’s on him, but I’m not going to start inventing rules,” he also remarked.

For a bigger penalty to be handed down, which would have put the Ford driver at least as far back as third, he presumably would have had to have cost van Gisbergen multiple positions.

In that case, no redress could make up for the incident, van Gisbergen has no incentive to play games, and the discussion is moot.

The point is that the Triple Eight driver’s trickery, clever though it was, could really have only affected the outcome if Waters had been close enough to make a five-second penalty a serious problem.

There is thus a narrow window for such actions to have a real impact on the final results.

Was van Gisbergen unsporting or impressive? Was he both?

If De Pasquale was to escape punishment for simply offering a redress, would that be a case of the guilty party getting off too lightly? He made the crucial error, after all, and van Gisbergen did not disadvantage anyone by making a mistake.

Do you think an offer to redress in discrete incidents such as this should clear the guilty driver of receiving a penalty from the stewards? Cast your vote below in this week’s Pirtek Poll.