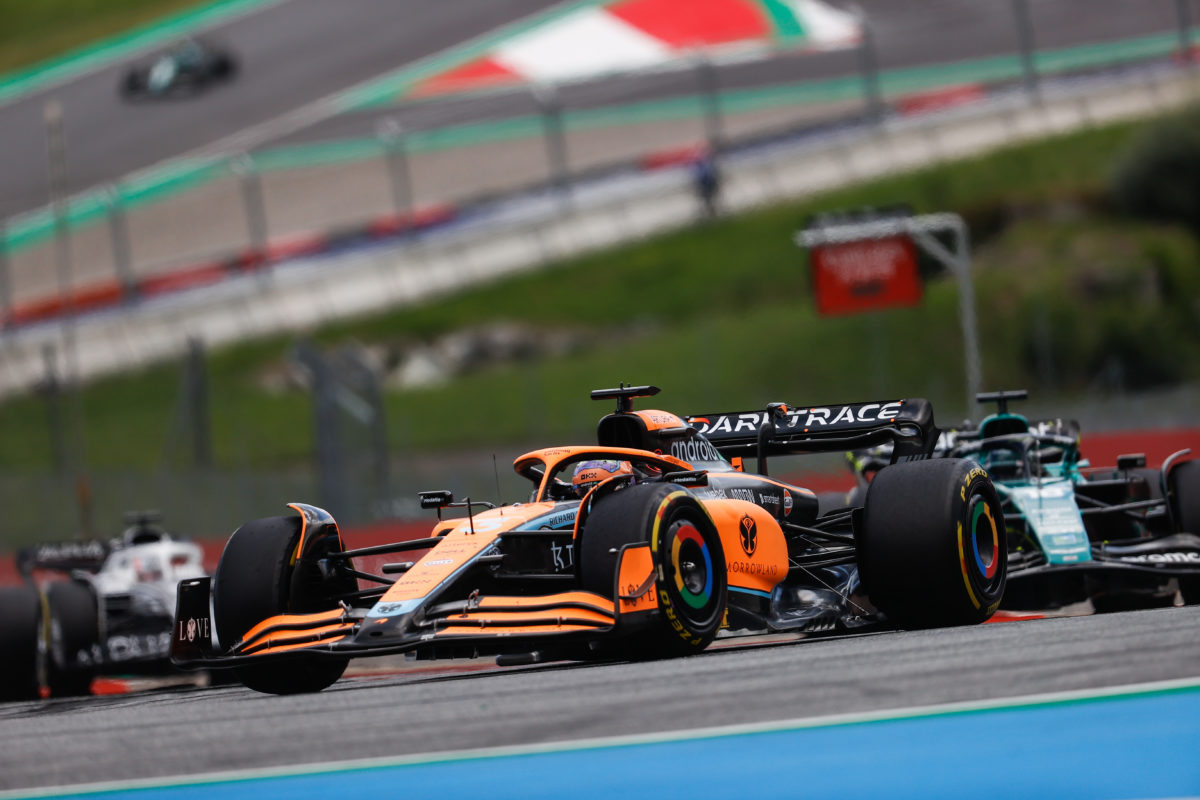 A points finish in the Formula 1 Austrian Grand Prix was a case of damage limitation for Daniel Ricciardo.

The Australian ended the 71-lap race in ninth, two places up from his starting position, it what was his third points-paying finish of the season.

However, his progress was hampered as he battled tyre wear across the front axle, which saw him lose time in the opening stint and fall back from team-mate Lando Norris in the final third of the race.

The two McLaren drivers had been running in close proximity for much of the race, Norris eventually extending an advantage that allowed him to serve a five-second time penalty for track limits and still maintain his spot ahead of Ricciardo.

“Obviously the target was points. I think, as a team, we’re happy with that,” said the 33-year-old.

“It’s a lot better than where we were Friday, so to get double-points is good for us.

“I was struggling with the left-front on the first stint as I’d had a lock-up into Turn 1, and put us a bit on the back foot. So it didn’t feel as good as yesterday.

“We then struggled more with the front, particularly front-left, even without the flat-spot, but I think we did well to get what we could today.

“I would have loved to have got [Kevin] Magnussen, but we’ve got to take what we can today. More points, bit of damage-limitation, so pleased with that.”

The team is set to investigate the cause of Ricciardo’s struggles late in the race as McLaren now slips to tied on points with Alpine for fourth in the constructors’ championship.

The papaya squad officially continues to hold the spot owing to Norris’ third at the Emilia Romagna Grand Prix.

“Daniel mentioned after the race that he was struggling quite a lot with keeping the front-left tyre alive,” team principal Andreas Seidl said.

“That’s why he wasn’t able to get back to Kevin as well, although we’re happy with the race weekend also on Daniel’s side.

“For us, as a team, after the weekend start we had on Friday, very happy with the outcome in the end, P7 and P9.

“With the pace the car had this weekend allowed us to progress yesterday and also today.

“It’s simply important to look ahead,” he added.

“Let’s get back to get on top of our reliability issues and then I think we have everything to stay in this fight for P4.”

Norris was forced to revert to an older power unit from his pool on Friday after issues with a brand-new unit fitted to his car stopped him on track in Free Practice 1.

The team’s engine partner, Mercedes, is investigating the faulty unit before making a call on whether it can be repaired and reused, or if it needs to be removed from the Brit’s available pool.

Ricciardo’s running on Friday morning was compromised by a faulty DRS flap, which took much of the opening hour to resolve.

Formula 1 heads next to Paul Ricard for the French Grand Prix from July 22-24.